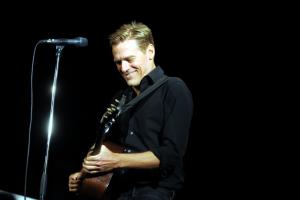 It was 2003 or 2002, don’t remember the exact year. But I do remember the euphoria I felt after the concert. Watch showed it was past midnight but we were still high,atleast I was. The joy of seeing him live, listning to him croon out all those tracks that I enjoy was just magical. And this was the 2nd concert of his I was attending.
It was a very last minute decision. I had been planning for the concert for months but the week had a bit of craziness- friend fell ill and I wasn’t sure if I could travel since I was holding fort at the office. Spoke to her and she gave me a good kick that said “go for it woman”.. Another guy [RJ/Station head] I know had called earlier to say he has 2 passes and all I had to do was get my butt to Bangalore.
The saturday morning I got to the station, stood in line, bought a train ticket and travelled to Bangalore for the weekend. What fun it turned out to be~!