Walk along the streets of Kumbakonam – Part I

The morning began with a cup of hot Kumbakonam Degree kaapi and this time I was looking forward to enjoying it in the town it is named after. I was sitting in a small restaurant along the streets of Kumbakonam taking in the morning scenes and waiting for my Kaapi. It came in a small davara tumbler- filled to the top with froth and smelt divine.

The man who served me the kaapi said “ithu than original kaapi” . I was curious about the “degree” attached to the kaapi and when I asked around, I heard different interpretations… 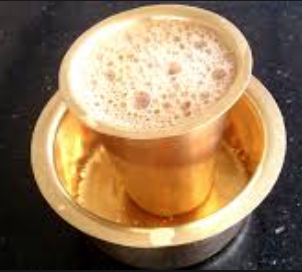 I didn’t really care what the real story was, but I did enjoy the Kaapi- was strong and hot,albeit sweet [reminder to self: ask for sugar on the side next time]… Was a bit stumped when the bill came, the kaapi was priced at Rs30 .. *Gulp*

The Temple Tank
Once I was done with that, I set out to explore the town. The guy at the Hotel front desk told me there are more than 100 temples and I did think he was exaggerating, but then as I walked out of the hotel, I spotted not one but three temples within 100 yards, which meant he was probably right. I turned right from the hotel and there stood the infamous Temple tank was location. It was a large one, and a lady selling flowers outside a temple told me this was the infamous Mahamaham Tank where the big festival happened, with over 10Lakh people coming to take a dip in the holy water.

The temple tank is quite beautiful.. Spread across 6.2 acres and trapezoidal in shape, the tank is surrounded by 16 small Mandapams (shrines) and has 21 wells inside the tank. The Mahamaham is the Kumbh Mela of the south and takes place once in 12 years. The Masimaham is an annual event that occurs in in Kumbakanom in the Tamil month of Maasi (February–March) on the day when the star Magam falls.. 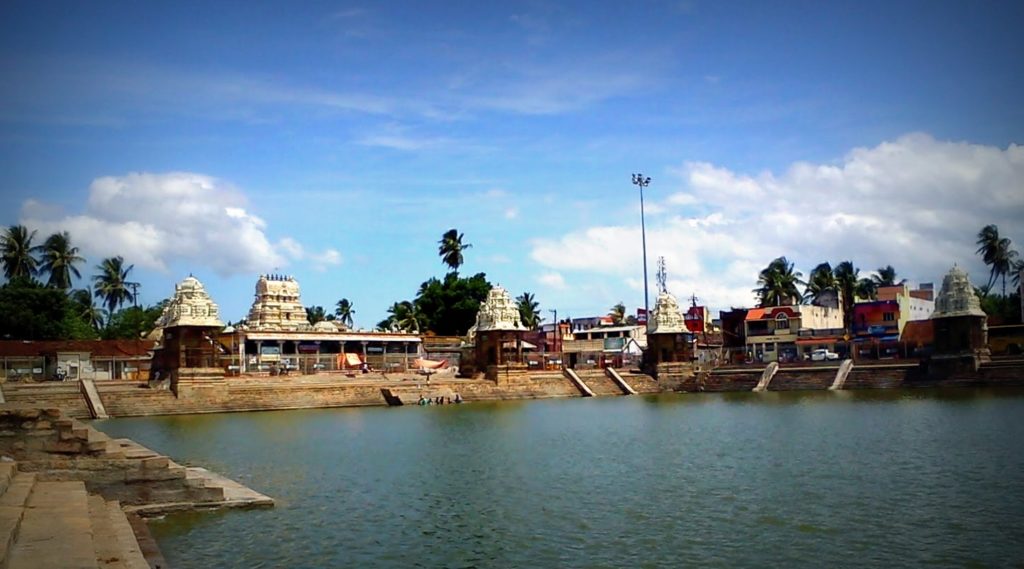 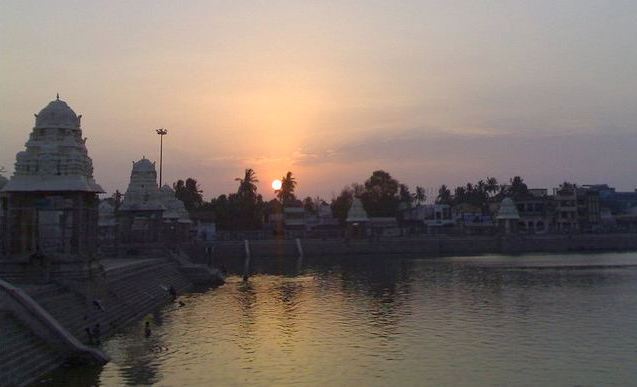 There is a legend behind this great festival -Mahamaham.The whole world became submerged in a deluge on account of the wrath of Hindu god Shiva, the destroyer for the unaccountable sins committed by humans on this earth. Brahma, the Hindu god of creation, recreated the world during the beginning of current Kali Yuga (Iron Age). Lord Shiva (Easwara) pronounced that after the end of previous era, a divine Celestial Pot  carrying nectar -”the essence of life,”would reach a holy place and rest there.The Celestial pot floated down the flooded water across several places and at last settled down at a spot near the river Cauvery where the town Kumbakonam is located.Lord Shiva , taking the guise of a hunter, shot an arrow at the divine pot and broke it, making its contents spill and the pot disintegrate into small fragments.  The spilling of essence of life  resulted  in the revival of life on the planet. Kumbham meaning the pot and Konam meaning crooked – the pot that  was broken by Shiva’s arrow. Here in the heart of the town, the pot broke into many parts and scattered around. The various spots became the sites of a score of temples in this town.  Kumbeswara, Someswara, Kasi Viswanatha, Nageswara, Kamata Viswanatha, Abimukeshwara, Goutameswara, Banapuriswara, Varahar, Lakshminaryana, Sarangapani, Chakrapani and Varadharaja,etc.  Brahma prayed to Shiva to allow pilgrims to visit the tank during the sacred occasion Maham. Accepting his request, it is believed, Shiva  along with Vishnu and other celestial deities  made their divine presence at the center of the tank. From Astronomy point of view, when the planet Jupiter passes over Leo on the day of the festival, it is believed, it will bring all water bodies together and enrich the tank with minerals. Similarly, a lake in Kotihar in Jammu and Kashmir gets full supply of water the same day, which otherwise remains empty during the other 11 years.
[Content courtesy: http://navrangindia.blogspot.in/2015/02/the-interesting-legend-of-mahamaham.html]

I couldn’t imaging that many people, the town is fairly small you know!