A Hi, hello and a trip is
born..-Part I
Here we go, up and away to Dehradun.. Part II
Hotel Sakoon, Dehradun at a glance… Part III
Now that we had satiated
our hungry tummies, we decided to get out and explore the town of Dehradun. I
had done some research and so had the friend, we thought we will see two places
– one was about 6kms away and the other 12-15kms. Did not want to be greedy, or
just visit many without actually spending time anywhere. After enquiring with
the hotel, we decided it might be cheaper to head out and hail an auto. Friend
and I headed out down the road, where we found an auto who agreed for a decent
price. Little did we know that he would be such a treasure chest of information
on Dehradun and show us more than what we had agreed upon!
[The one place I had kinda wanted to visit was Ruskin Bond’s home, but then it was a good 100 odd kms away.. Sigh~ that will have to wait for another trip..]
Auto Ashok uncle[Ph: +91 9997375724] is how I
have saved his number on my phone and I would highly recommend him to anyone
heading to Dehradun.
Sahastradhara
Sahastradhara referee
to “thousand fold spring”, and is quite popular among
visitors.  You will find a small waterfall of sorts tumbling over rocks
across places, and this water drips from limestone stalactites, making the
water rich in sulphur which gave it the nickname “sulphur springs.”
The water is crystal clear and has healing properties, it is said a sip of this
water is enough to cure any ailment in the human body. Apart from the water
fall, there are quite a few caves, covered with plants with water dripping down
the leaves. There are staircases to these caves but it gets slippery with
the water flowing constantly, so be careful!  We noticed there was a
ropeway to go up the hill but on that day the ropeway was down for
maintenance. There is a small Shiva shrine along with Guru Dronacharya within
a cave a few steps away. 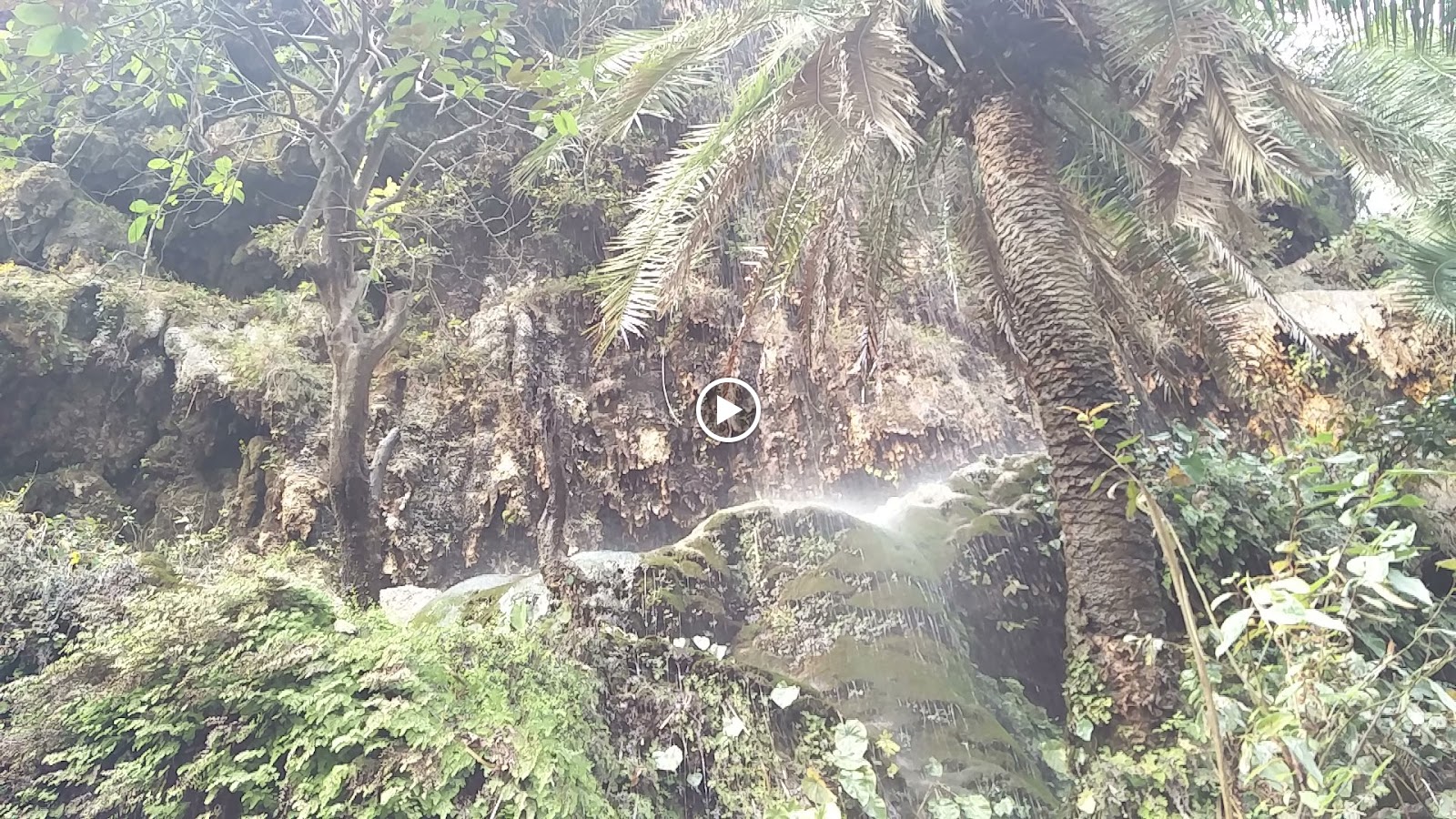 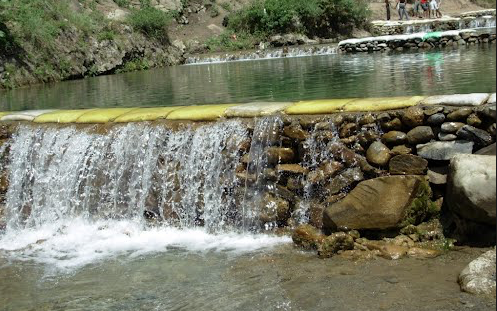 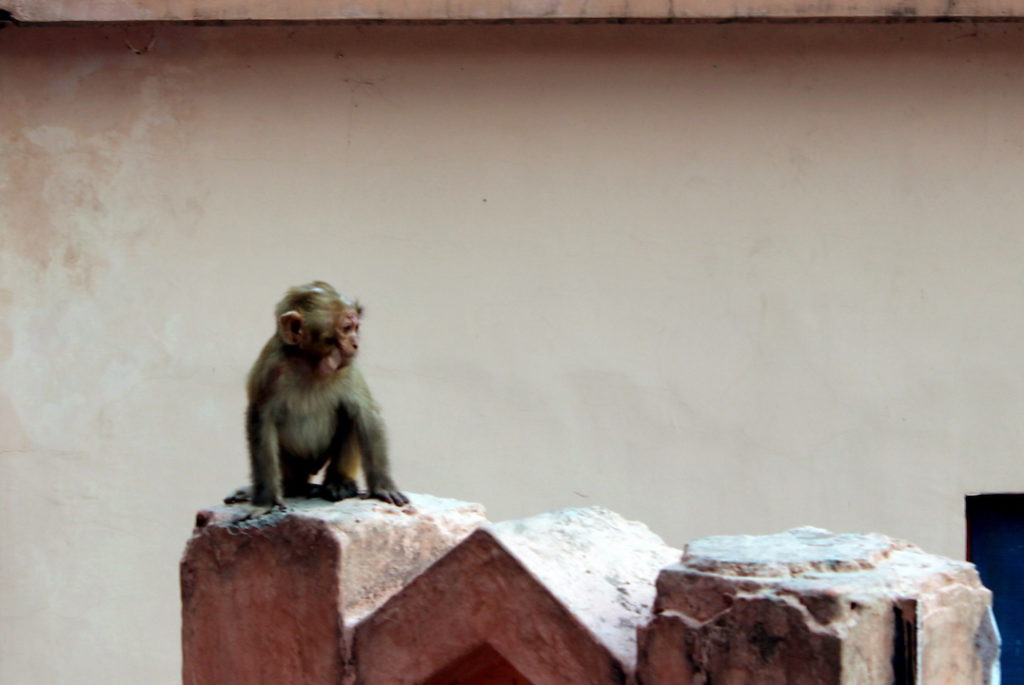 We
noticed there was a waterpark nearby with colourful slides and play area,
guessing the access is further up the road.
We spent
about an hour here.. it was beautiful!! As we left here, I could hear the water
dripping down the plants and monkeys jump from branch to branch looking for
some nibbles. 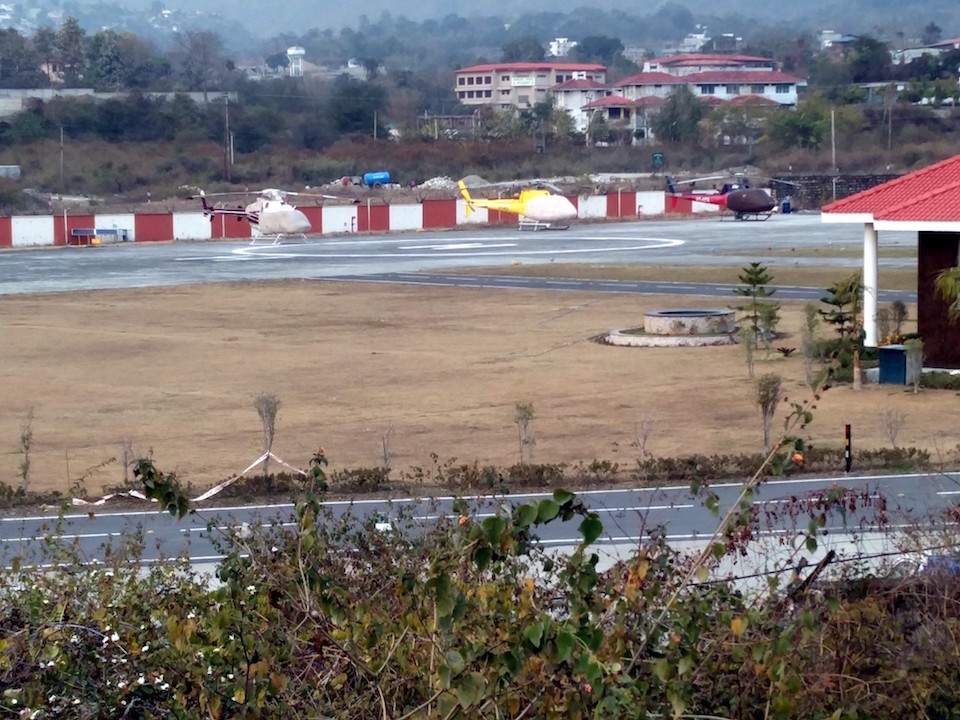 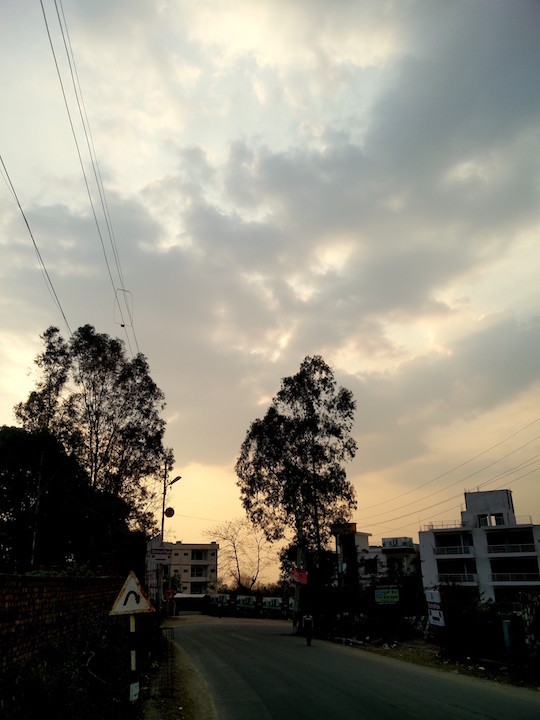 Tibetan Monestary
Our
original plan was to visit Sahastradhara and Tapkeshwar temple before heading
back to the hotel. But our auto uncle had other plans, he told us he will show
us few other places before Tapkeshwar, which was along the route. We said ok..
All along the ride, he gave us insights into the town, the history, and
how things have changed over the years… It was fascinating..
So anyways,
about 10kms from Sahastradhara he halted the vehicle at the Sai Baba temple
where my friends went in for a prayer. I had a call, which I took
casually strolling down the road. That is when I discovered the Buddhist
temple/Tibetan Monestary next door to the temple. There was no one around and I
ventured in cautiously with my DSLR dangling from my neck. The place was
empty, calm and peaceful, but for a few monks standing in the building near the
rear side. The main temple was closed, but I managed to walk around the campus
and it was beautiful. According to a plaque near the wall, this was the
Sakya Monastic Institute and was established back in 1964 by
His Holiness The Sakya Trizin. Reminded me of the Namdroling
Monestary in Coorg. Later when talking to a monk he mentioned since it was
their New Year the temple shut early in the afternoon and would open the next
morning only. 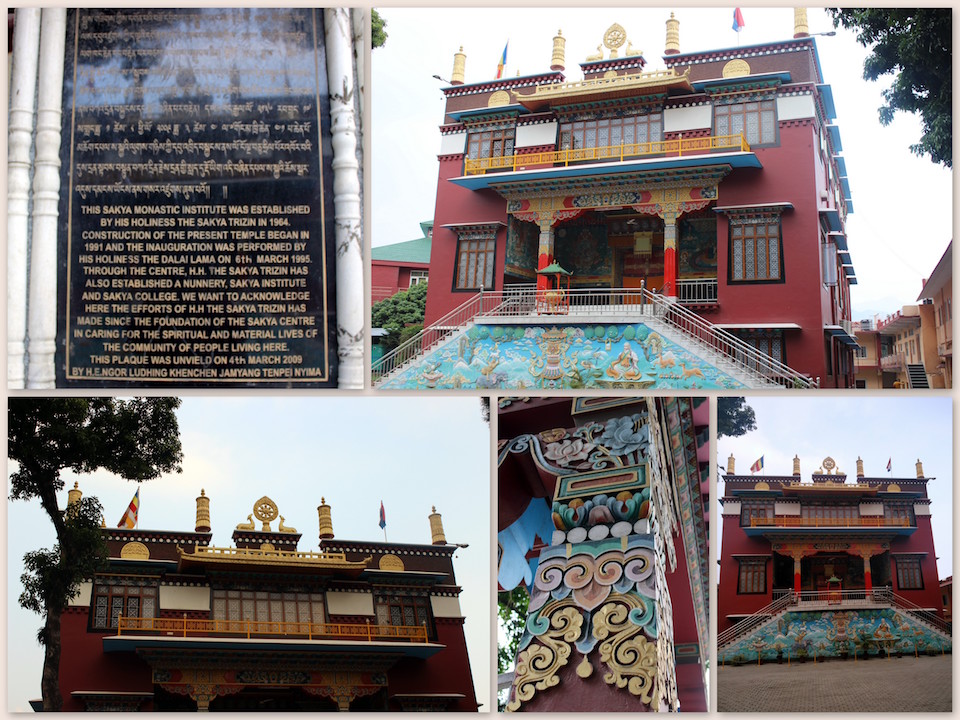 The
others too joined me; we roamed around for a few minutes before heading
back to the auto. The weather by then had gotten chill and the wind was
blowing in our faces as the auto road along. Our auto uncle announced we
were headed to Tapkeshwar.
Along the
way, he stopped at a Government place pointing out to the Helicopters parked
there, saying these were used for people travelling to Badrinath [if I remember
right]..
Tapkeshwar
The vehicle came to a hault near a tree and the auto
man told us we had to go down the flight of steps to get to the temple. Unlike
our South Indian temples there are no flower vendors or bustling market nearby,
it was quite silent.  We went down nearly
150 steps after which we turn left and walk down a slope of sorts to reach the
cave that houses the Lord.
The Tapkeshwar
temple was again a fascinating one! Situated by the forest side, the
main Shivalinga at the temple is located inside a cave. Water drops from the
ceiling of the cave trickle down over the shivalinga which is apparently quite
a sight during rain/monsoon seasons.
Legend
has it that Dronacharya [the teacher of Pandavas and Kauravas in Mahabharata]
once lived here, which is probably why it is called Drona Cave. Story goes that it was here that Guru Dronacharya
and his wife, Kripi, were blessed with a son, Ashwathama, and milk started
dripping from this cave owing to the powers of Lord Shiva for Ashwathama who
needed this milk. This mythical stories revolving around it has endowed the
temple with a hallowed aura. The river
flowing through this temple is the infamous Tons River of Dehradun.
While walking inside the cave, we noticed there were
quite a few shrines, including one of a standing Ganesha [orange in colour]
upon whom people had stuck coins and Rupee notes. There was also a tiny room of
sorts with a huge stone lamp that is said to go on forever..
As you get out of the temple you will notice another
flight of steps leading to a bridge and a temple beyond the same. The one thing
that kept running in my head was “how on earth did people discover these
caves/temples and decide to build a temple, a bridge and connect them all” 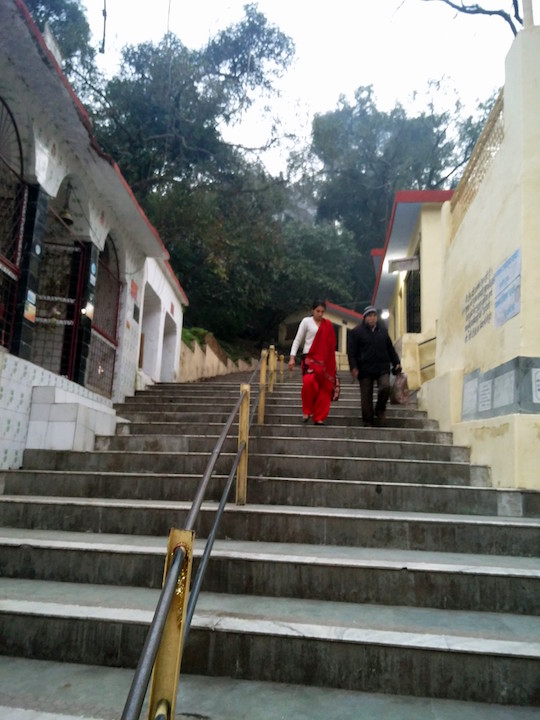 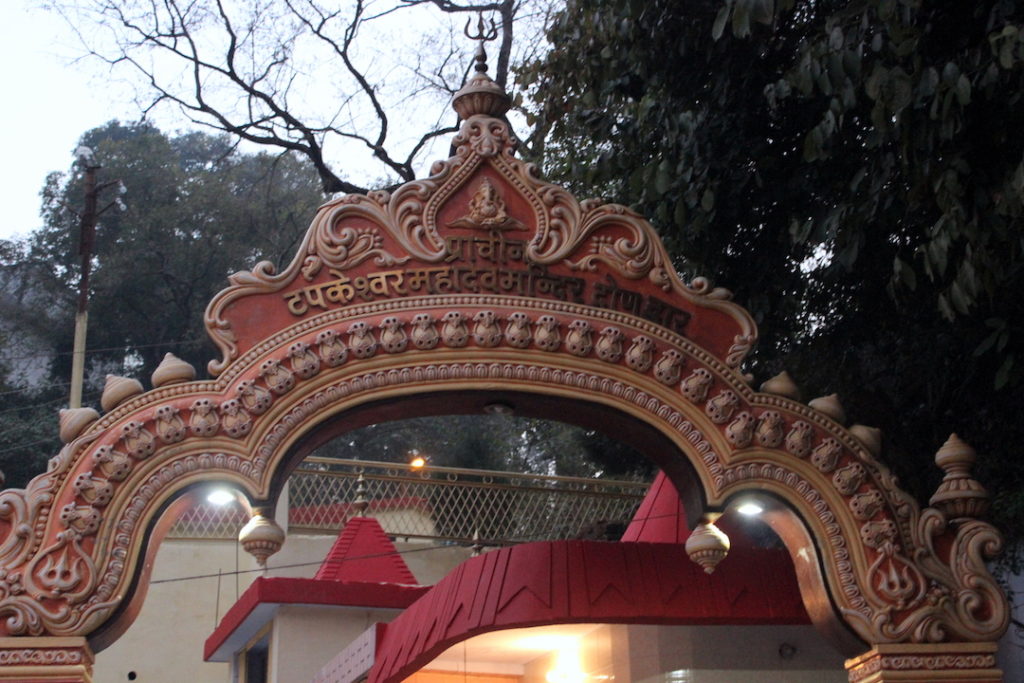 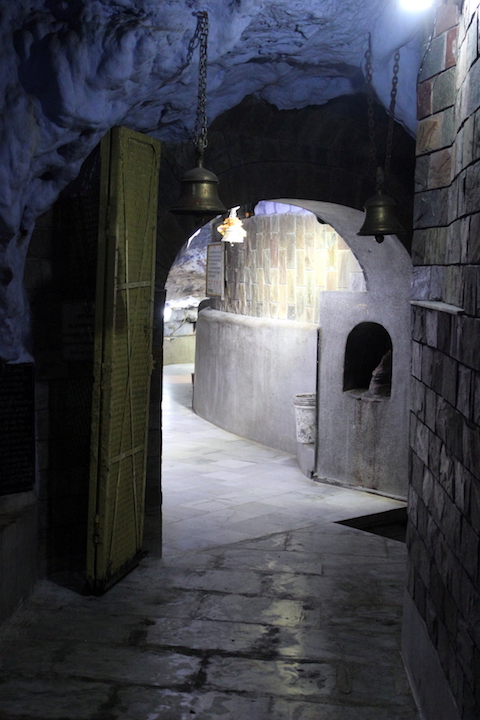 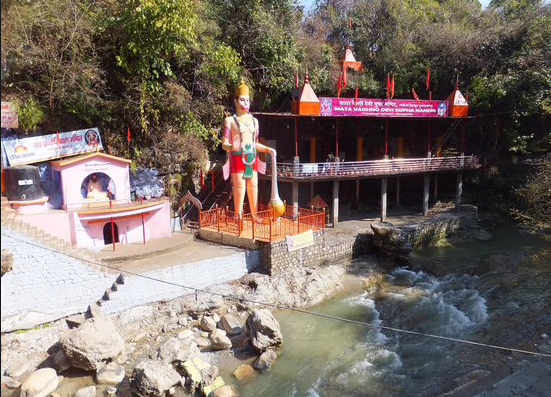 We climbed back up the steps and paused every now and
then to see a Sadhu sleeping on the sidewall, and in one spot we heard Michael
Jackson songs playing from an old tape recorder….
Getting out of the temple, we finally decided we were
done and asked auto man to drop us back at the hotel. But oh no, he wasn’t done.
All through the journey back, he took us through Army cantt areas, showed us
the Survey Of India building which is where all Maps are authenticated, the
Doon School, the largest Blind school, the Braille printing press [which was
unfortunately shut as it was late in the evening] and also told us of many
other places that was scattered across Dehradun. We were mesmerized at how much
the town had and the man knew!
He dropped us off at Paltan bazaar saying it was a
good place to check out and that our hotel was just down the road on the other
side.  When we asked him about
considering becoming a tour guide, he smiled and said “No, but if I find people
who are interested, I will definitely share what I know..”
We walked towards the market that seemed to be bustling with activity, there were shops on the  pavement and bigger ones as well, tucked between them were food outlets. Well, it was one packed market and we were all set to get lost with the crowd…
I was already dreaming of what lay ahead the next day when suddenly I spotted a few guys sitting on stools applying mehndi on eager hands..