Once we were done with the morning dip in the Ganga, my friend A had a list of temples that had been shared by another friend’s sister. She rattled out the messages and my mind voice was screaming “Oh no, oh no, please let us not get dragged to all these temple.. one or two I can deal with.. not that many”.. lol..

Friend went on to enquire about two temples at the hotel reception and the girl said they can be accessed by Ropeway[“Udan Khatola” as the locals call it], which was down the road on Har Ki Pauri.. We said ok, and hailed an auto to get to the 1st temple- Mansa Devi Temple. The earlier trips had all been short and we paid the auto guy Rs10 each,this time we thought it would be slightly more.. We were in for a pleasant shock, to say the least.

The auto guy dropped us off about 6kms down the road, and said we had to walk the rest of the way as roads were blocked. He then went on to demand Rs150 for the ride.. We were zapped.. Went and asked the cops how much it would cost and they agreed with the rate he quoted. Beaten, we paid him and began walking uphill. It was a narrow road with small houses and shops on either side. Since it was Vasant Panchami, there were kids all through the road flying kites.

We walked and we walked and kept walking… after a point came upon a store where the guy asked if we were headed to the Mansa Devi temple. We said yes and he then asked us to go down the narrowest flight of steps to the ropeway. We went through the store, down the narrowest staircase and discovered there was a mini town down there. More shops, homes and a railway track right alongside these was what we saw…  Walked down for a km or so and we finally spotted the ropeway ticket counter.. Phew!! Bought tickets for ropeway ride to both temples [ Mansa Devi & Chandi Devi] at Rs228 per person.

While there, a lady cop called my friend aside and asked her to fill out a survey form. For what you ask? Well, there was plans of opening a South Indian hotel there and they wanted to know what dishes would work.. I joined in and we filled out the form. Also chit chatted with the lady cop, and she commented “your hindi is good, how is it that you speak it so well?” 😀

Anyways, we walked into the Ropeway centre, and the excitement within me was building up… One empty box came by, we hopped in- my friends on one side and me on the other .. And we were off, this ride was about 3mins.. The total length of the rope-way is 540 metres (1,770 ft) and the height it covers is 178 metres (584 ft). [sample video] 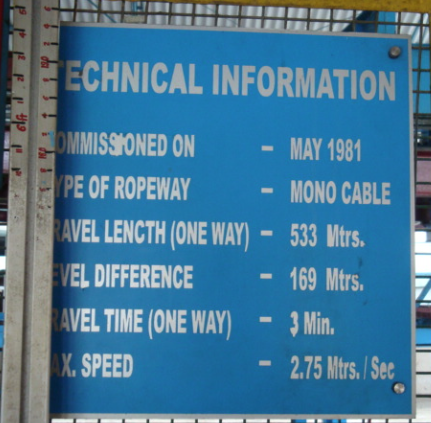 You get off the ropeway and walk along a path, a series of steps before reading the temple complex  Leave your footwear and walk further down to reach the main temple. Mansa Devi Temple is dedicated to goddess Mansa Devi and is located atop the Bilwa Parvat on the Sivalik Hills, the southernmost mountain chain of the Himalayas. The temple therefore is also known as Bilwa Tirth [ is one of the Panch Tirth -Five Pilgrimage sites]. The Goddess is an avatar of  Shakti and is said to have emerged from the mind of the sage (Rishi) Kashyapa. 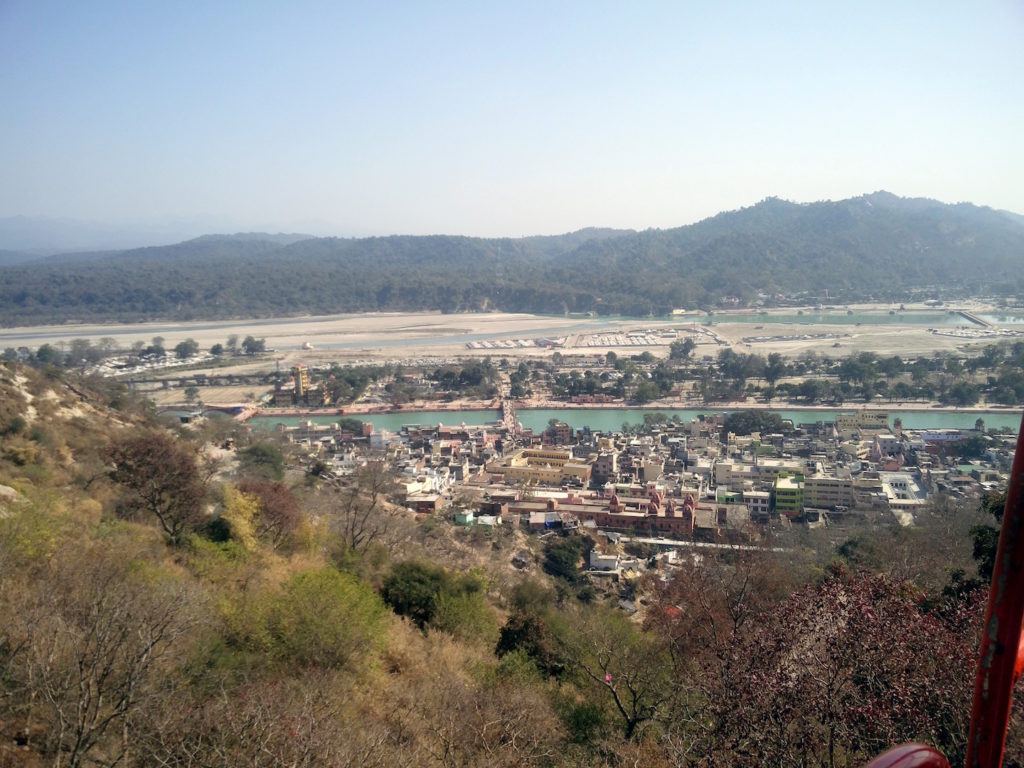 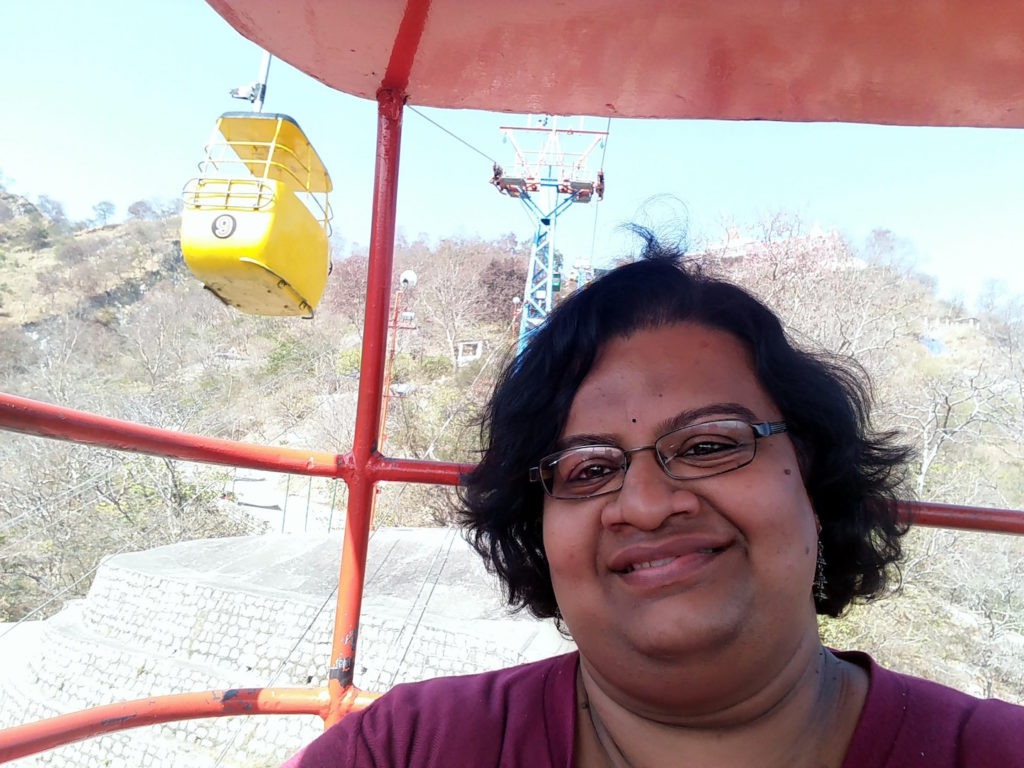 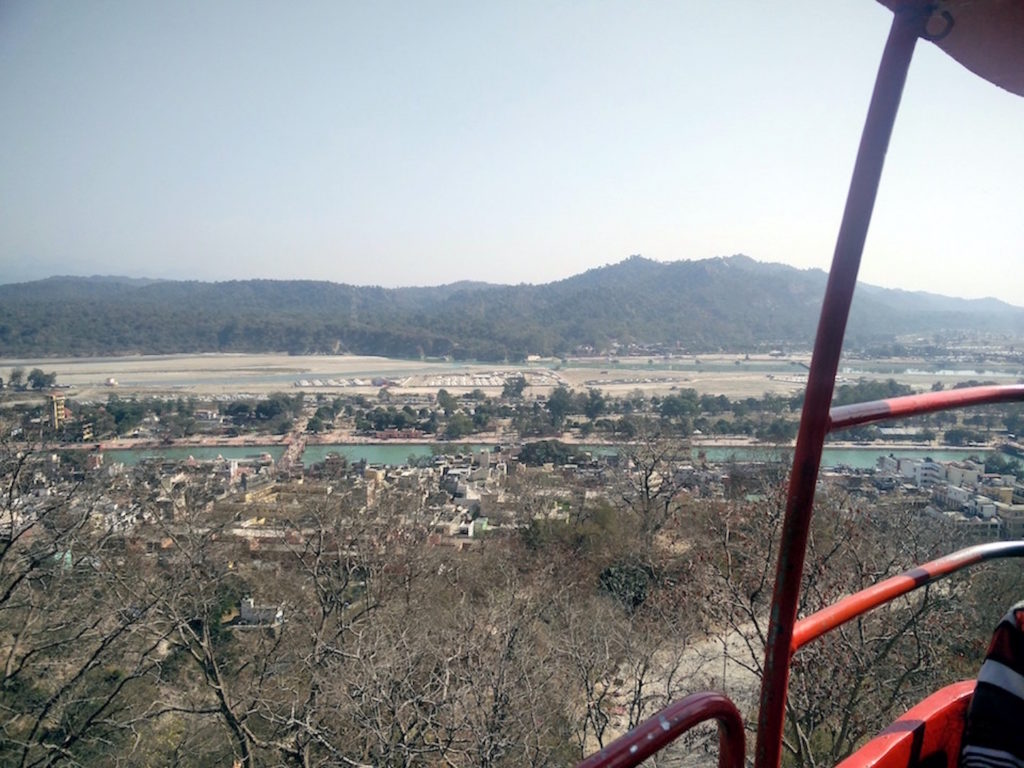 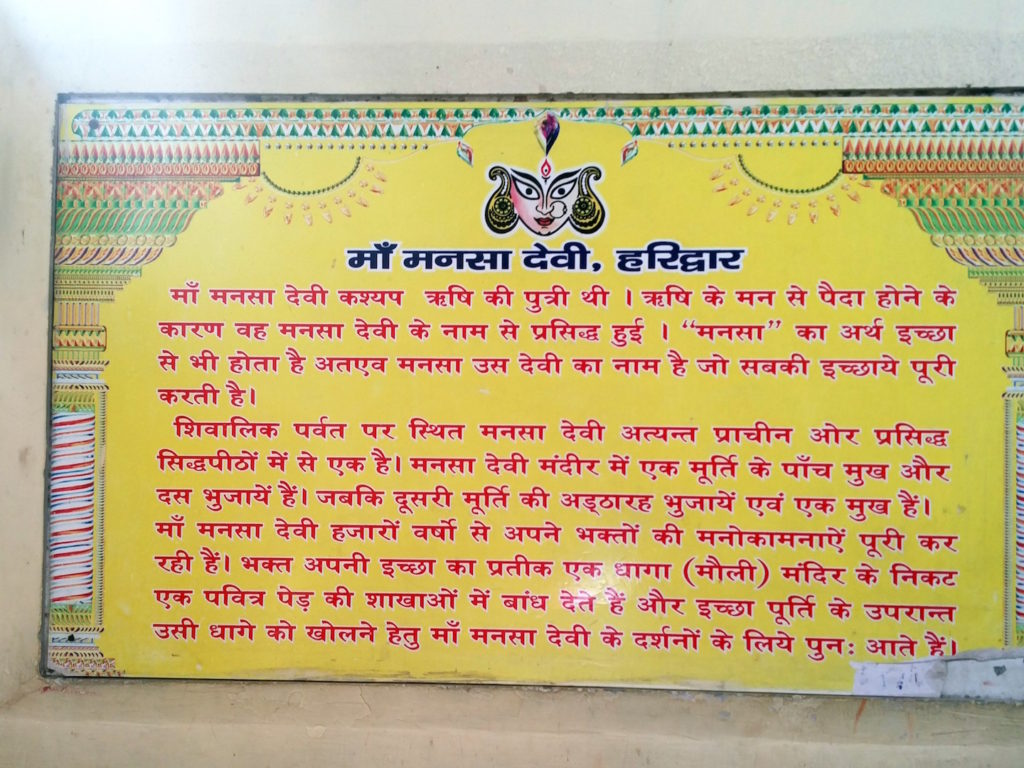 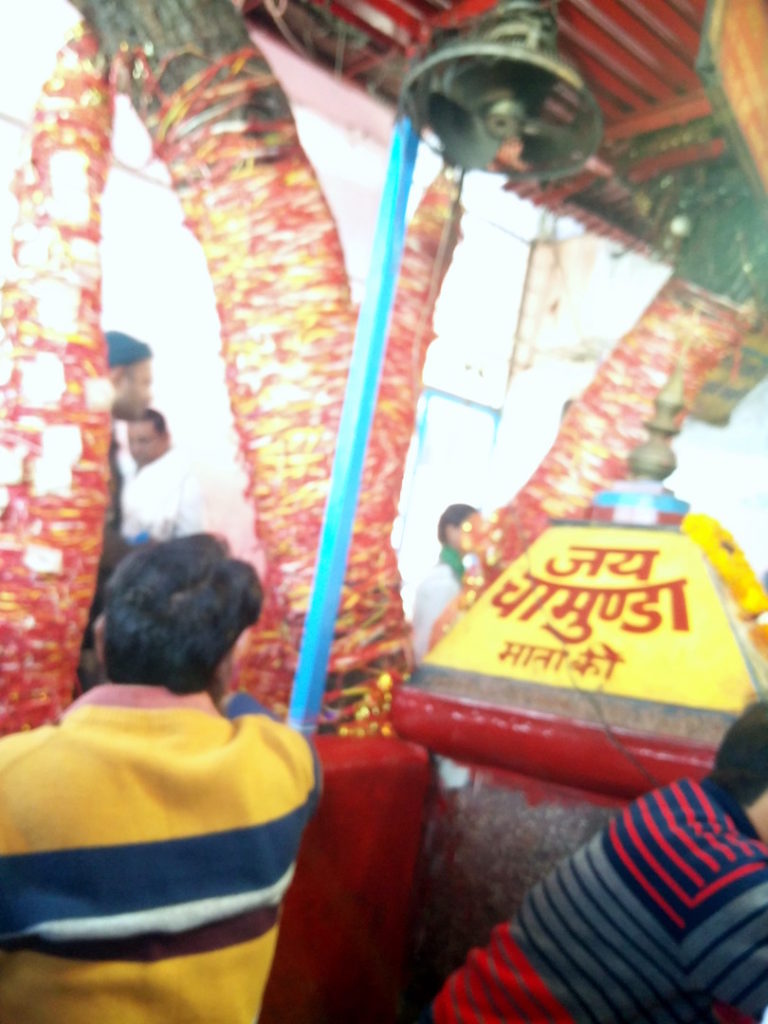 The term Mansa means wish and it is believed that the goddess fulfils all the wishes of a sincere devotee. People who visit the temple, make a wish and tie a red thread around the tree within the premises.  It is said that once your wish is fulfilled  you should come back and untie a thread.I also noticed many putting sticker bindis or leaving a pad of bindi around the temple. Luckily it wasn’t too crowded… Oh and one thing I found weird was there were all these smaller shrines around the main shrine, with a priest in each of them. If you are interested, you prostrate before God and offer prayers, and then the priest thwacks you on our bag with his hand, and in the Hanuman shrine he had a Gaddha of sorts made from cloth that he used to thwack the devotees with… Friend got thwacked in almost all the shrines and I passed it up, happy with my Hello.. 😀

Oh, must tell you how amazing the view from the top was.. It was quite breathtaking, and the ride back down to the ropeway centre was beautiful.. There are lush green forests all the way around,  trees in different shades of green and brown. The Ganga river flows like a snake down below and you just feel so free and liberated… I loved the ride and it was quite an experience.

As we got off the ropeway and walked back to the store from where we had reached here, I was already looking forward to the 2nd ropeway ride to Chandi Devi Temple.. Had forgotten that i was being dragged from one temple to the other and looked forward to the ride, the view and the excitement.   🙂