In life we come across people of all kinds, shapes, sizes and personalities. While I couldn’t care about their appearances, it is their personality that leaves an impact. Sometimes its positive, sometimes its inspiring, and sometimes it just irks me to no end.

Not sure if it is random timing or a phase in life but am coming across folks who are sitting on a High horse, looking down at the rest of us, smirking, sneering, and passing comments/judgements.
I have one question to ask them – Who died and made you King/Queen of the world?

Definition for “high horse” acc to http://www.dictionary.com/browse/high-horse is [noun] –
“a haughty attitude or temper; a contemptuous manner.” 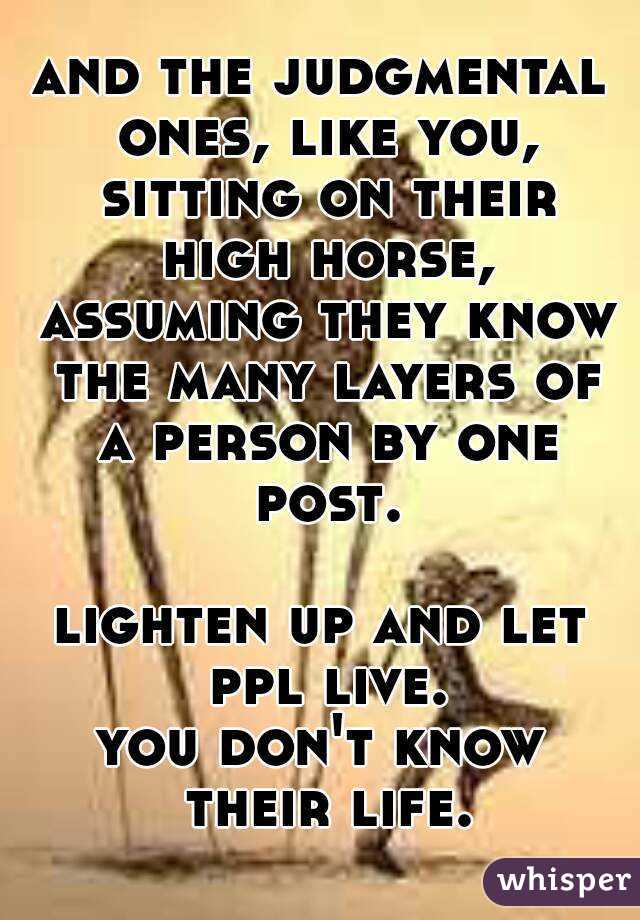 Let me explain further, get you to understand what am ranting about. There are these folks, good at heart and all that, but they are so judgemental of those around them.  It is at a point where they are constantly correcting them, trying to get them to do what these “king/queen[s]” think is right, rule the world with their expert comments [however half baked they are] and basically try and prove some kind of point.
In reality, all they are doing is not looking into their own self, making the changes needed or simply living their life better.  The one common thread I notice among all these folks is that they don’t really have a life.. NO, again I am not telling them to go out party nonstop or travel, but they don’t seem to be doing anything outside of x y or z.
No, I am not judging them or telling them what to do, but I know for a fact they have a long way to go before they can point fingers at others. Maybe this is their defence mechanism, to stop the world from looking at their flaws. I know about this whole defence mechanism thing because till about a few years ago Anger was my shield. Even before someone could say something, I would pounce and they would walk away. But then I worked on it, and have managed to stop doing that [to a certain extent, there are times I fly off the handle, and regret it instantly… I now apologise and move on]
You know how there are people who will talk nonstop…it is not because they have tonnes to share, but more to stop others from asking them questions and putting them in the spot ?? [ah, I have given you something to think about eh…yep!]
I feel sad for them, but then every time I meet/talk to one of them I am left pissed off and wanna do noting more than to just tell em to shut up. There are a few who I have stopped and told to chill [I am my biggest critic and I beat the shit out of myself enough, don’t need someone else nitpick], but they don’t get it. If not me, it is someone else, and this goes on esp if they have found a crowd that is submissive or does not talk back …
Do they get a kick from putting people down?
Do they find some pleasure pointing out flaws in others?
Do they not realise they are not any better?
Do they think they know everything under the sun and those around them are stupid/duds??
What would it take to get them to pause and reflect on their own lives?
I have seen parents, friends , partners do this to those around them and they do it all the time. They are happy as long as you are eating off their palm and nodding your head to their statements, but the minute you disagree, oh no, you have ruffled some feathers and out come the nasty words and smirks…they wont let go till you finally give in or give up!!

Is there some kind of insecurity they are fighting that pushes them to just keep taunting others? Do they not see that they are actually pushing those who care away? Or are they so happy/comfortable being on their own, that it blinds them ????  It wouldn’t take me 2 seconds to give a sharp retort and walk away, but I choose not to stoop down to their level.. Also, what this would do is anger them, they still wouldn’t see what they are doing is wrong/hurting others over & over & over…

I admit I make oodles of mistakes, be it in my actions or words… I know I am nowhere near perfect, I dont even know what perfect is, but then I don’t go around with my nose up in air, behaving all hoity toity with an air of arrogance [yes, that is the aura these folks give out].. Sigh..
You might have money
You might have looks
heck, you might have gazillion talent/skills
but it is just sad if you look down on others, just because they are different…
So, these folks sitting on these so called High horses are one day gonna fall, with such a loud thud, they just might not be able to get up at all.  Next time you wanna correct someone or show them you know more than they do, just pause for a second and think “what is the point of it… or is it cool to just let it slide and have a fun conversation?” 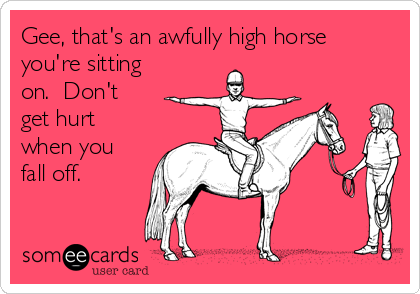