Friend and another lady who were part of the road trip had been subscribing to milk from Sarda Farms for a few months now. And so one of the things we were curious to do while in Nasik was to visit the Sarda Farms.Having grown up seeing cows in my grandparents house, watching them being milked, heck we have even played with the calves, I was curious to see what was different at the farm, I was also curious to see what system they followed- with the calves, the way cows were treated etc….


My friend had written to them earlier, asking for permission and fixed an appointment as well, Sunday evening 4pm. When we looked up Sarda Farms on Google Map, it showed it the place an hour away- in Shenith[Taluka Igatpuri, (off Mumbai – Shirdi highway)]. We planned accordingly, heralded the kids into the two cars and hit the road. 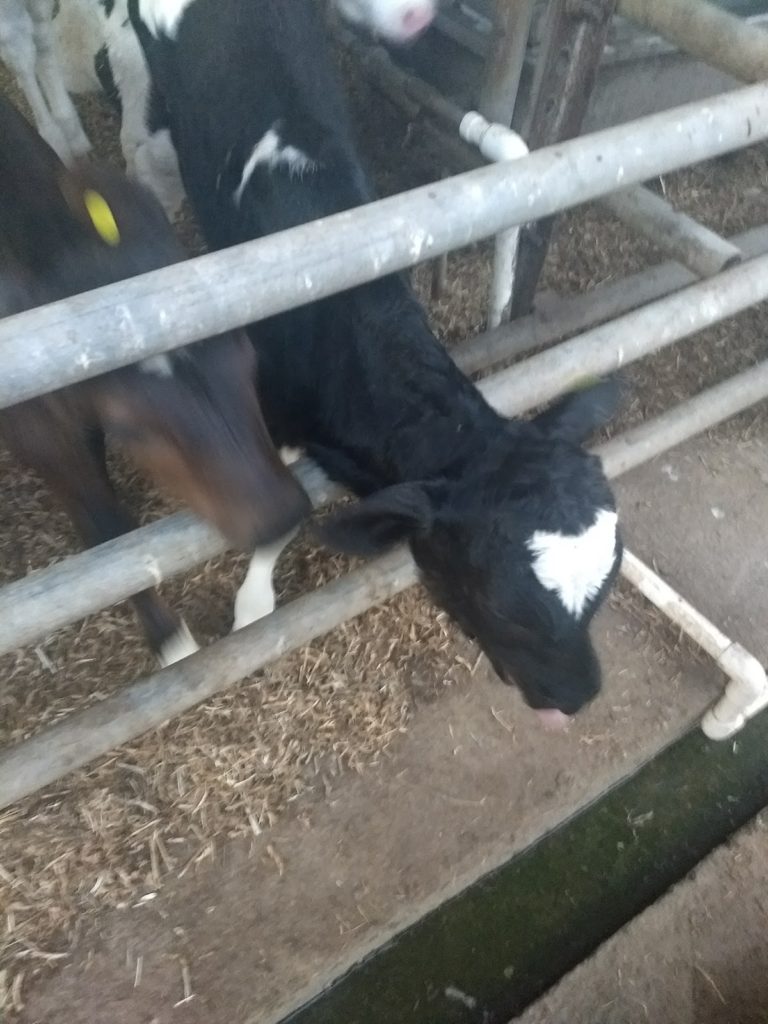 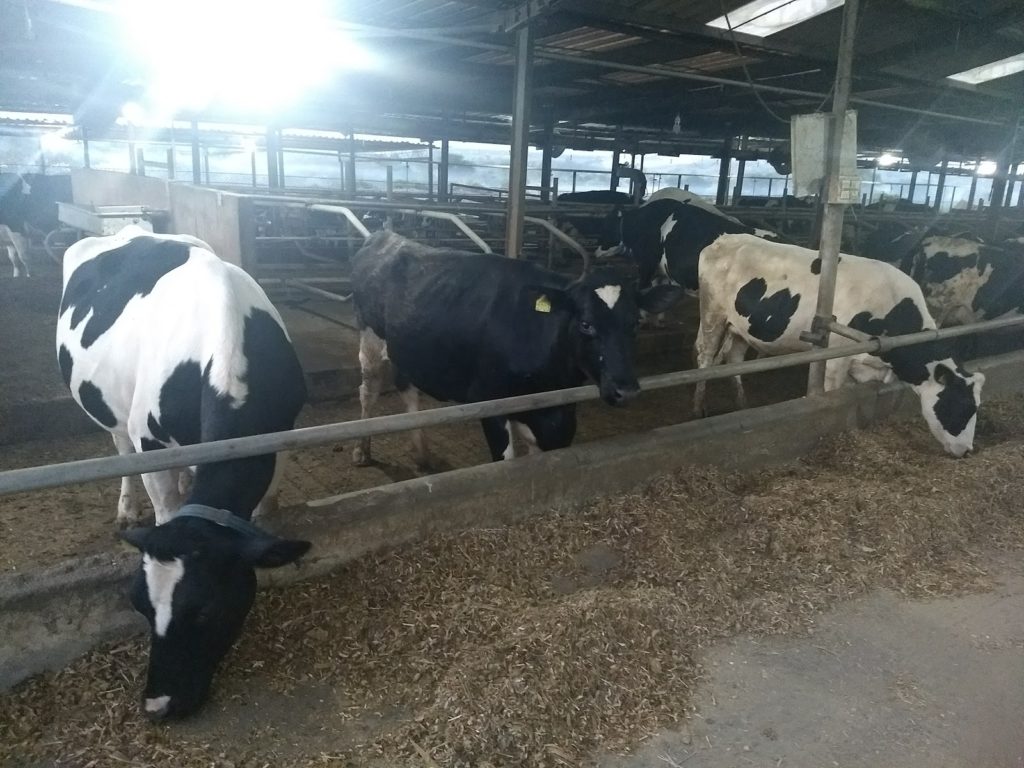 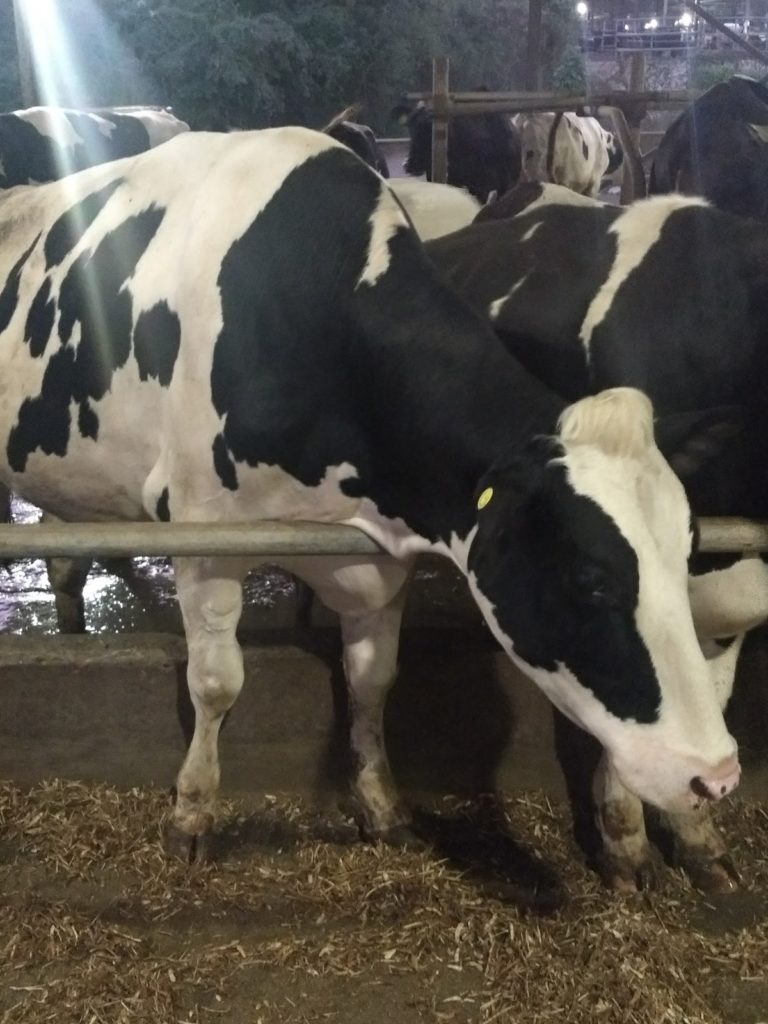 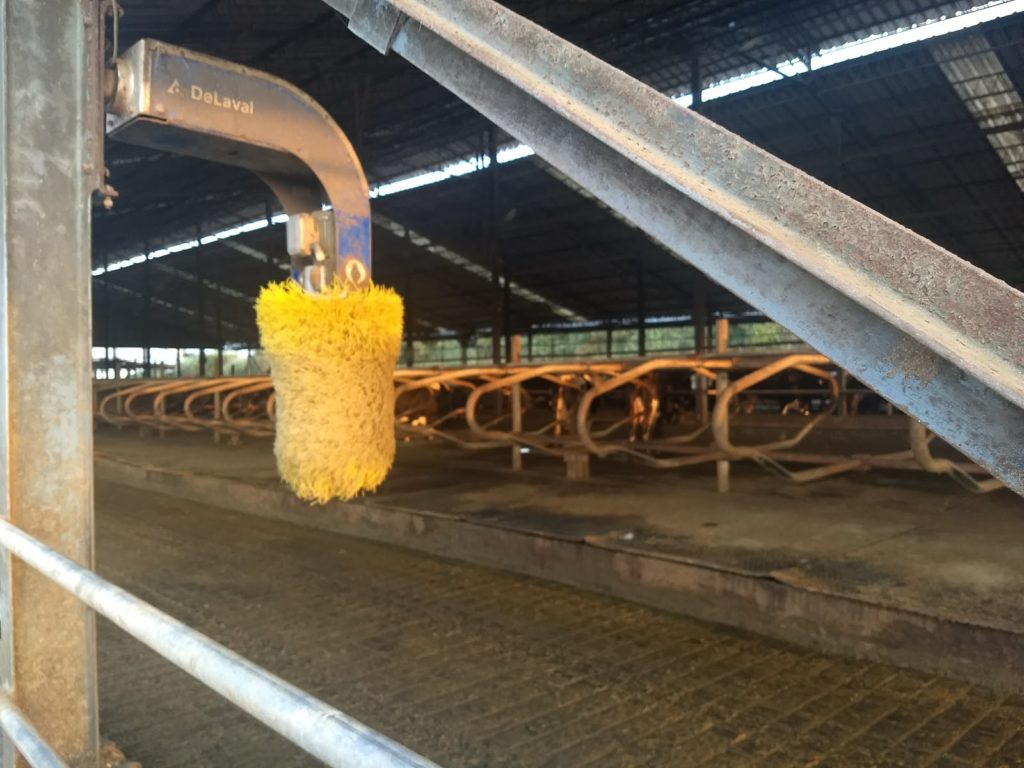 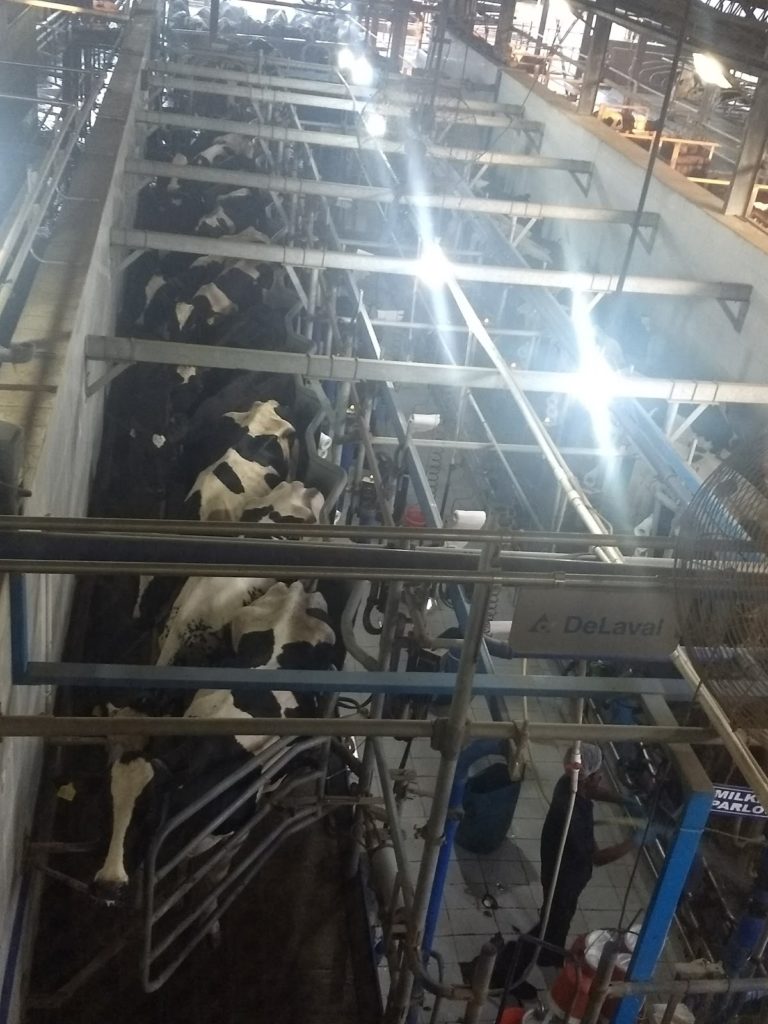 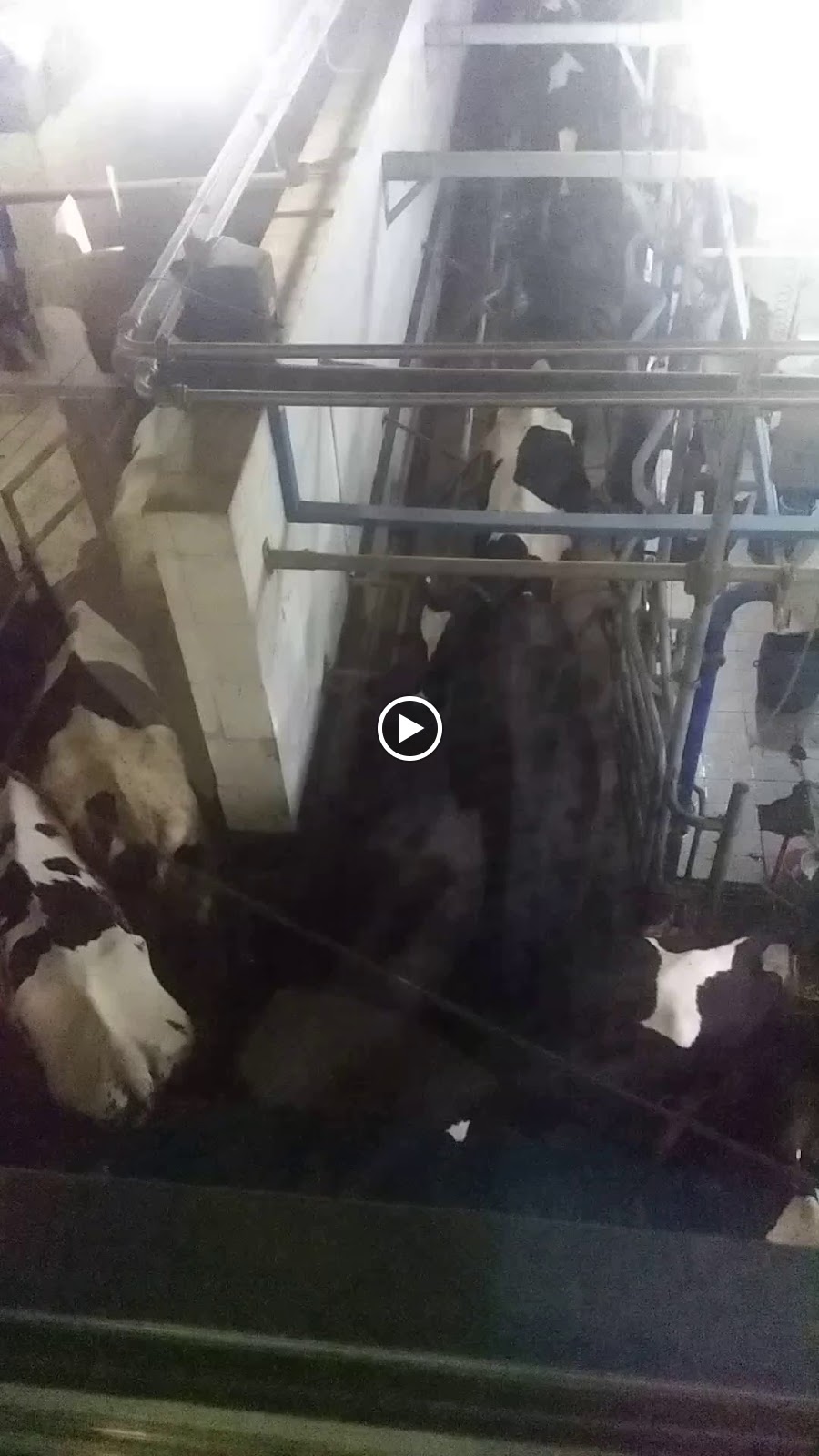 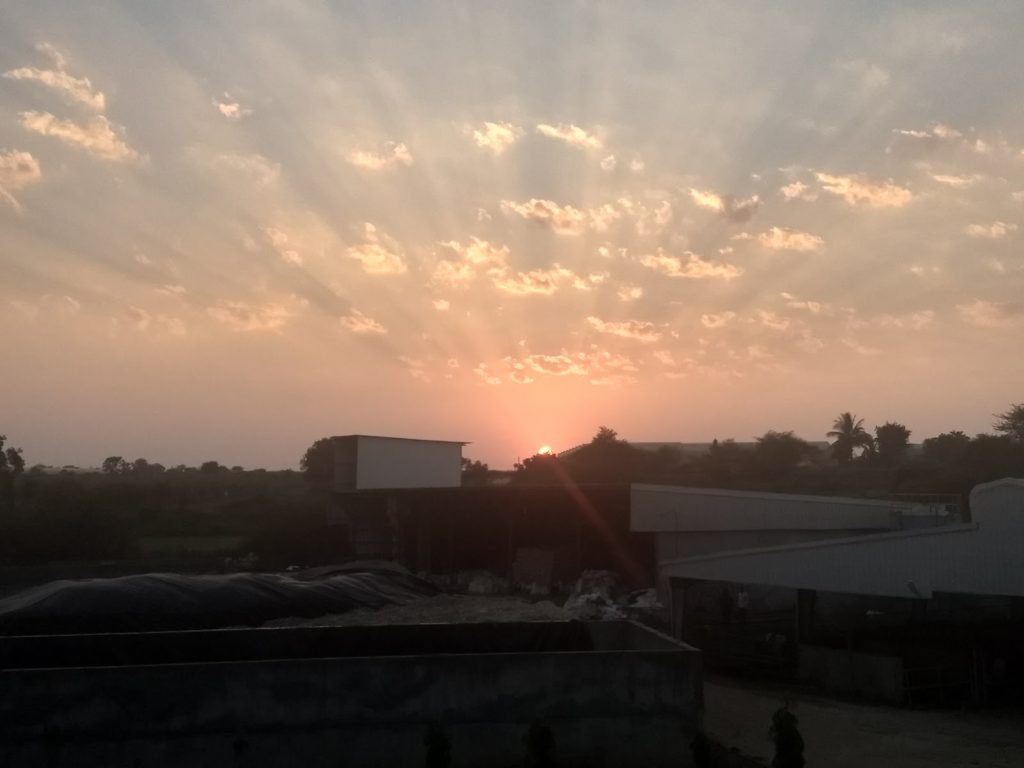 Asked for directions every now and then, had guys on bikes literally taking over the route, showing us the way. And then what happens, we reach the office of Sarda Farms only to discover it is their Corporate office and not the farm. Bummer!! A few frantic calls, some semi-heated discussions – Should we go ahead, cos the actual farm was about an hour away [ acc to Google Map] but wait, the guy at the other end gave us a route that would take half the time [woot woot.. what sort of sorcery was this… ]. Finally, we caved in and decided to stick to the original plan and armed with the directions he had given and our trusted Google map, we were off. Well, what do you know, we actually reached the Farm gates in half an hour. Lo Behold~

Met the guy who was to show us around, the first he made us do was step into a small tray filled with lime powder. This is so that we dont spread any bacteria that was in our shoes into the farm.

Founded by Shrirang Sarda, his sole objective was making sure people got to enjoy fresh milk delivered at their doorsteps – a luxury in today’s times. The milk is packaged in glass bottles much like it used to be in the good old days and delivered promptly in the morning [between 5 am & 7 am], which ensures the quality is as high as it can get. The 4+year old brand now delivers to over 7000 homes across Mumbai and Nashik.The farm generates around 10,000 litres of milk per day .
The cows were segregated based on their health, first time pregnant, some that were pregnant and milking, others that were new, and then there were the sheds for calves – ranging from 0-10day old going all the way to 1 year olds. We got to walk through the property, spread across 11 acres , petting some of the calves and watching how the milking process was done as well. They got periodical medical check ups done to assess their health, wellbeing, ailments [if any] and how/why they were giving as much milk as they did.. And then there was a huge shed that contained the cow feed- roasted corn, hay, and a whole lot of other food items that were mixed and fed. They have a property right next door where they grow a variety of plants that are part of the cow feed as well, and when there is a shortage they purchase from other farms nearby. The place also had fans, water sprinklers, and a scratch post for the cows to play with…

The milking process is completely automated, the cows are herded into the zone in single file and they seem to know where to go, what to do. The suction gadgets are placed on their udders once cleaned and the milking happens, once done they are sent out back into their holding area. The milk is then brought down to 4degrees, and sent to container trucks which take them to the other unit for further processing, packaging and shipping out.. Think the milk is priced at Rs90/ litre,which is fairly high when compared to other milk,but then small price to pay for good quality.

We got to taste the milk – in its purest form or as coffee/tea.. After spending about an hour and a half, or more, we got back in our vehicle to head back to the property.. I had just one thought in my mind, “why do we need to put the cows and calves through so much to get milk…. hurts to think what the calf goes through when separated its mom, hurts to think of what the mom goes through to not be able to feed her calf, hurts to think about the way calves are isolated, and then there is the different treatment for cows vs bulls….” Knew i wont be able to sleep easy thereon… seeing what I had… sigh~

An article on Sarda farms