Architecture, history and more at Orchha 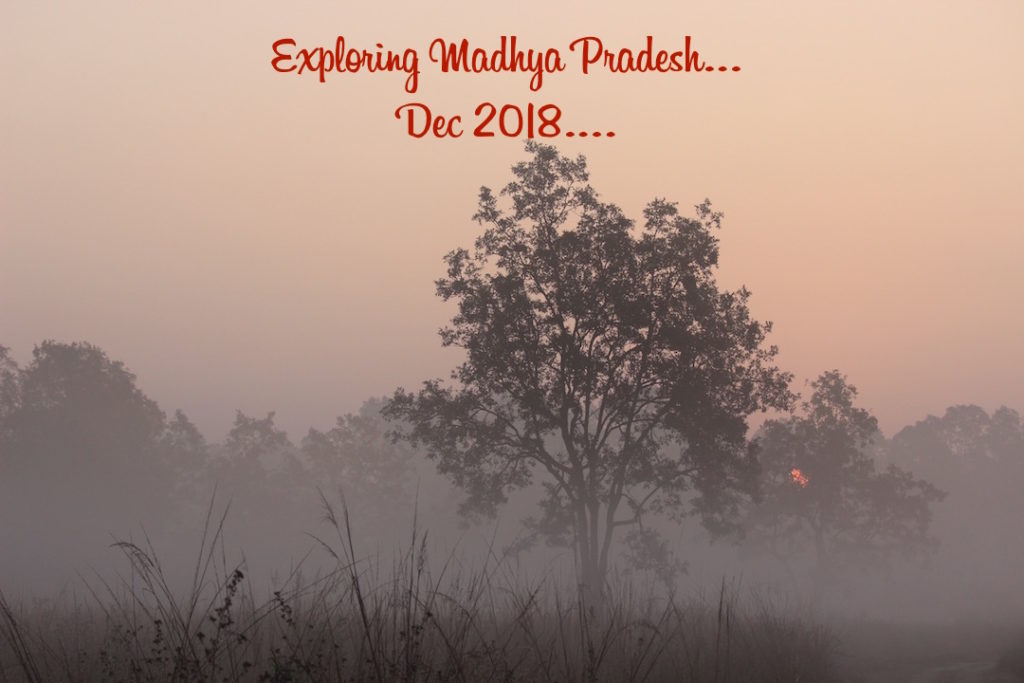 The historic town of Orchha, [the capital of the Bundela Rajput Kings] situated right along the banks of River Betwa, was founded back in the 16th century by Rudra Pratap, the Bundela Rajput Chief. We had booked a tent at Betwa Retreat [it is a Madhya Pradesh Tourism hotel, the place is very good and I highly recommend it], near the river. Since it a small town, most of the sight seeing worthy places are within a kilometers, with the Cenotaphs [ Chatris] just around the corner from the property. 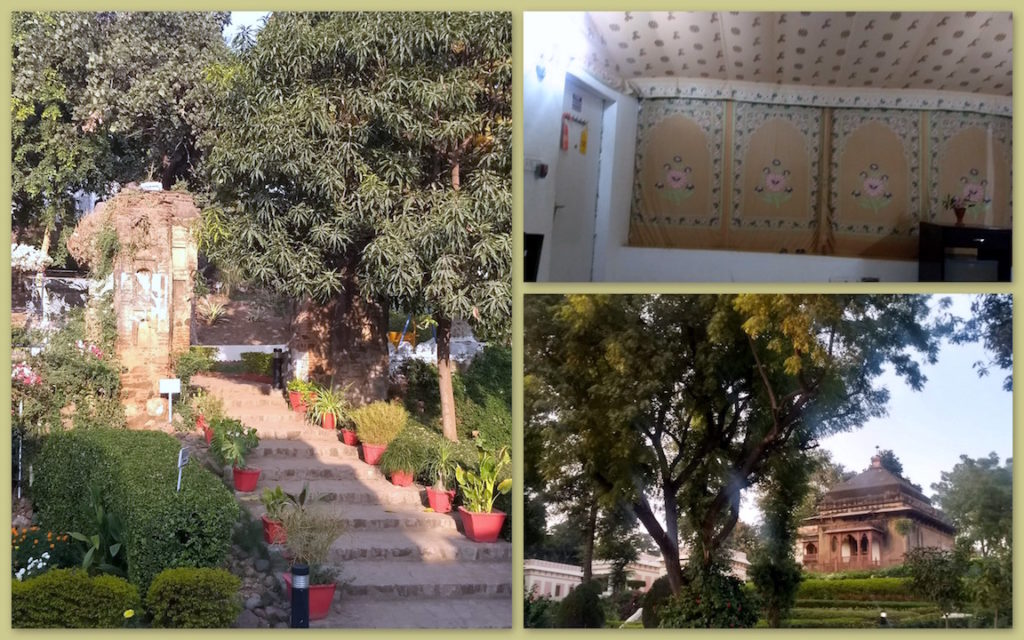 We decided to spend the evening exploring the property and area around, and next morning was set aside to explore the town… Some of the interesting places to visit while in Orchha are,

The Raja Mahal is a fine example of Mughal architecture with typical stone jali (lattice) work and multifaced arches at the entrance. The palace is in the shape of a perfect square that is further divided into two courtyards. The main courtyard is flanked by the palace which has a four-storeyed building at one end of it.

The other three sides have five-storeyed apartments. The Raja Mahal’s facade is simplicity personified with hardly any ornamental detailing, but the interiors house some splendid paintings. The outer courtyard has some beautiful arches arranged in floral patterns and carved out in lime mortar.
Inside the Mahal, the two places worth a look are the Durbar-e-Khas and the Diwan-i-Am. The Durbar-e-Khas, or the Durbar Hall sits on the 1st floor of the palace

The Diwan-i-Am is an assembly hall where the king often held meetings with his council of ministers.

The hall has three platforms, and from the highest one, the king held forth on affairs of the state. The Diwan-i-Am has massive columns and the ceiling has been decorated with paintings belonging to the Mughal and the Bundela schools of art. The exterior of the palace is decorated with elephant and lotus-shaped brackets. The entire architecture of the Raja Mahal is exquisite and speaks loftily of the stone carvers who sculpted it.


Also inside the same complex is the Jahangir Mahal..This property was built to honor Jahanghir on his first visit to Orchha. Similar to the Raja Mahal, the fort consists of some breath taking sculptures, hanging balconies, delicate trellis and chhatris, topped domes, etc. Built in 17th century by Bundela ruler, Bir Singh Deo, this palace is the symbol of friendship between the Bir Singh Deo and Jahangir. During the first visit of Jahangir in Orchha, this palace was built in his honor. Right next to it is a smaller building which has a room that used to be the Maharaja’s bedroom. Today it is Hotel Sheesh Mahal, a hotel that also belongs to the same group that owns Betwa Retreat with Sound & light shows in the evening.. 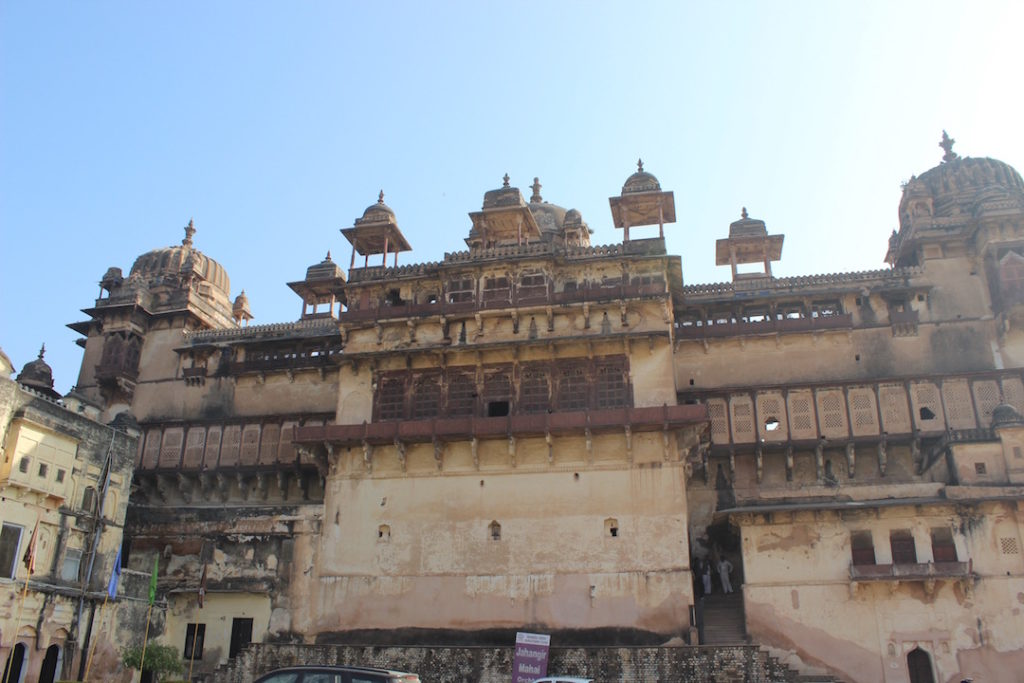 Located atop a hill, near the Raja Mahal, the Lakshmi temple is very different from any other temple you would have visited. There was a guard at the entrance who told us that the main idol had been stolen few years back and some renovation was going on, so we had to be careful walking around the place. The place is a mix of Hindu & Islamic style of architecture, with long rooms on all 4 sides that are filled with interesting paintings on the walls and ceilings [these are called “Sgraffito”,a kind of art work]. Apart from the vibrant canvas, there are these scratch paintings, which form a different section of art in the temple…the walls are painted brown with the design scratched off the walls.. There is also a tall tower of sorts along with a small tomb. 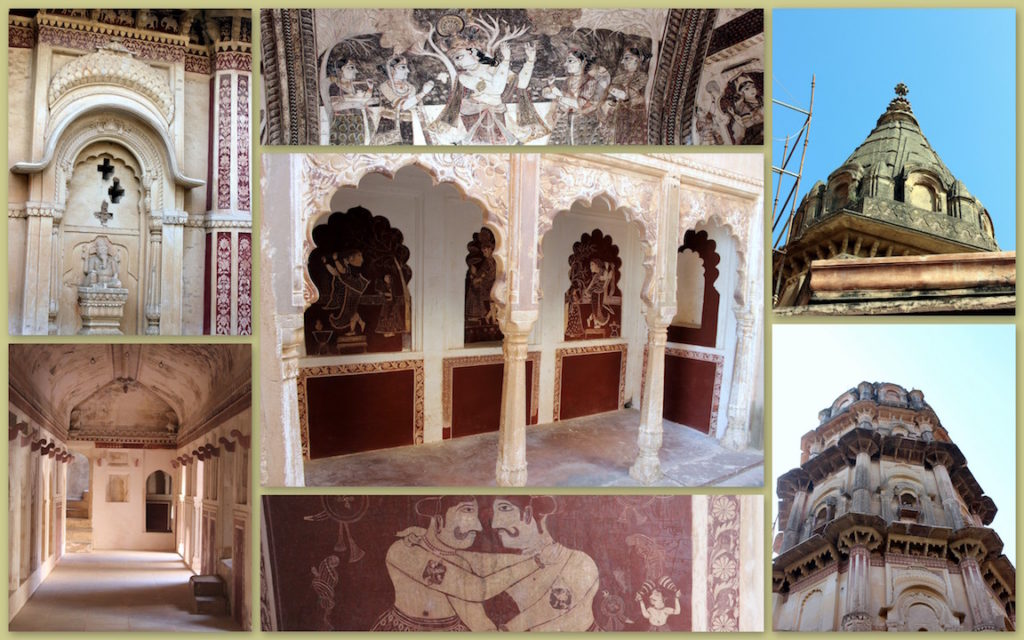 The Chaturbhuj temple at Orchha is a beauty.. We spotted it from the Fort and knew we had to visit. It is located right next to the Ram Raja Temple… The temple is built on a massive rock platform, and you need to climb a flight of steep steps to reach the main sanctum. The story is that the temple was built by Raja Madhukar in the 16th century for Lord Vishnu, who has four arms which is why the name. Legend has it that it was originally meant for Lord Rama, but that the King got overthrown and the idol now sits in Rani Niwas, the private residence of Raja Madhukar’s wife- Maharani Gansh Kunwar… 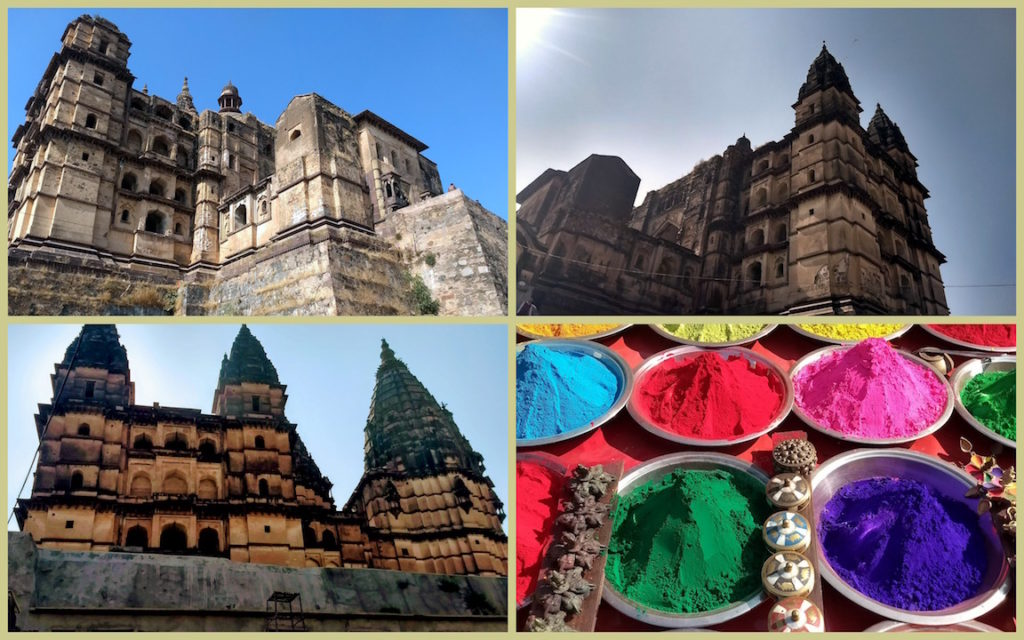 Chhatris [Cenotaphs]:
These were my first glimpse into Orchha, featured in a Maaza ad. Instead of being captivated by Katrina kaif, I couldnt stop looking at these that were the backdrop. The cluster of the Chhatris along the Kanchana Ghat of the Betwa River are structures that will have you curious and excited. They are memorials of the rulers of Orchha [going back to the 17th and 18th century]…There are about 14 cenotaphs inside one complex with structures similar to each other, some bigger and others with far more detailed intricate work on them. The one that stood out was Bir Singh’s Cenotaph – it features Islamic style of architecture as well.. Today these cenotaphs are also home to the endangered Indian Vulture specie… We spotted quite a few, some sitting inside the mini structures and others on the spires and the walls around the place. 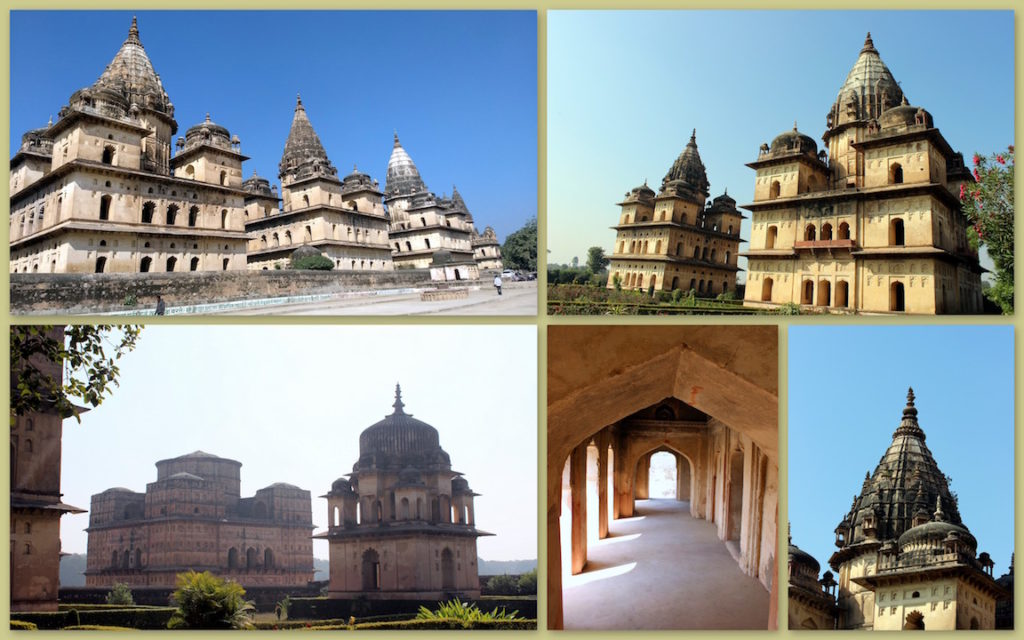 What is interesting is that we bought an entrance ticket of Rs10 per person of Indian origin [Rs250 for foreign visitors] at Raja Mahal and this ticket was valid across Raja mahal, Jahangir Mahal and Lakshmi temple as well.

We we walked back to our hotel, the only thought on my mind was “damn, the past was packed with all kinds of adventures, wonder what it must have been like to live in that era….” well, it was time to pack our bags and head over to the next destination… Any guesses where?