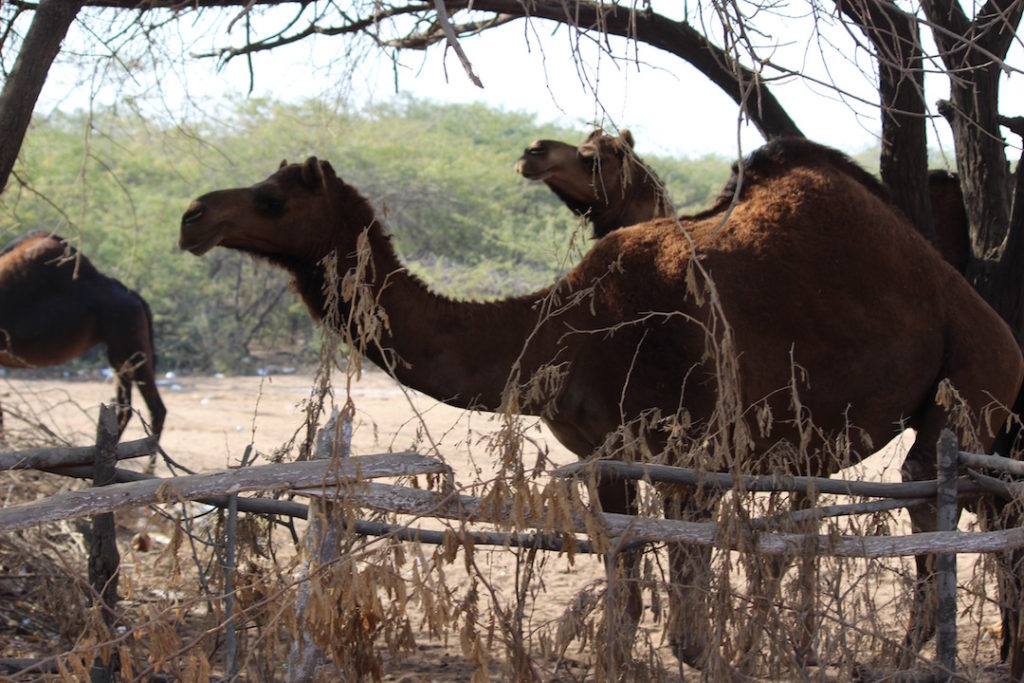 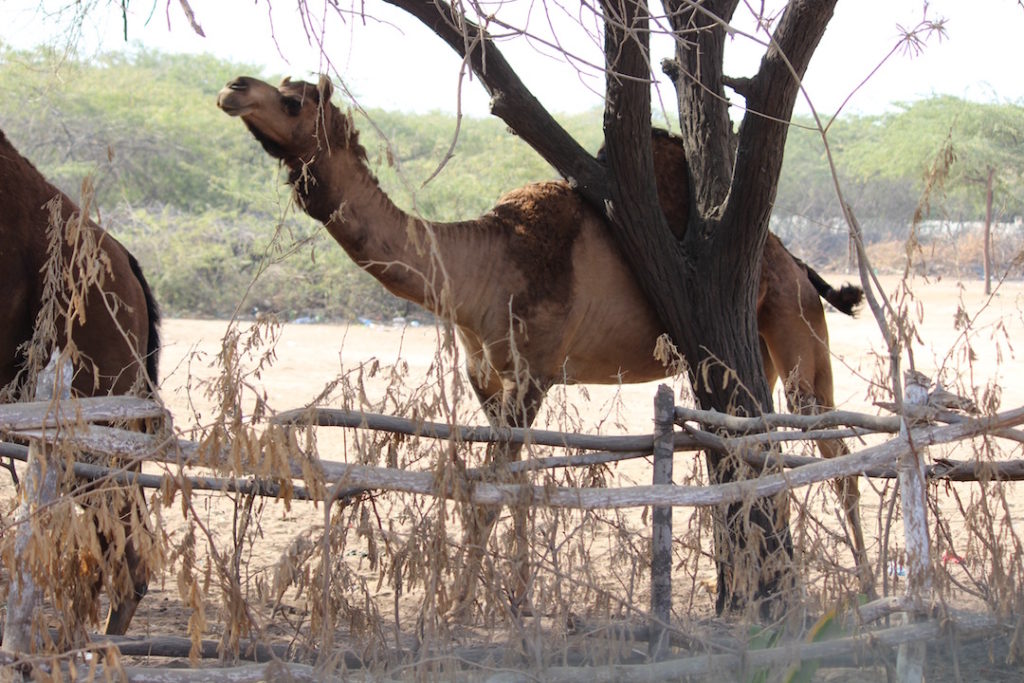 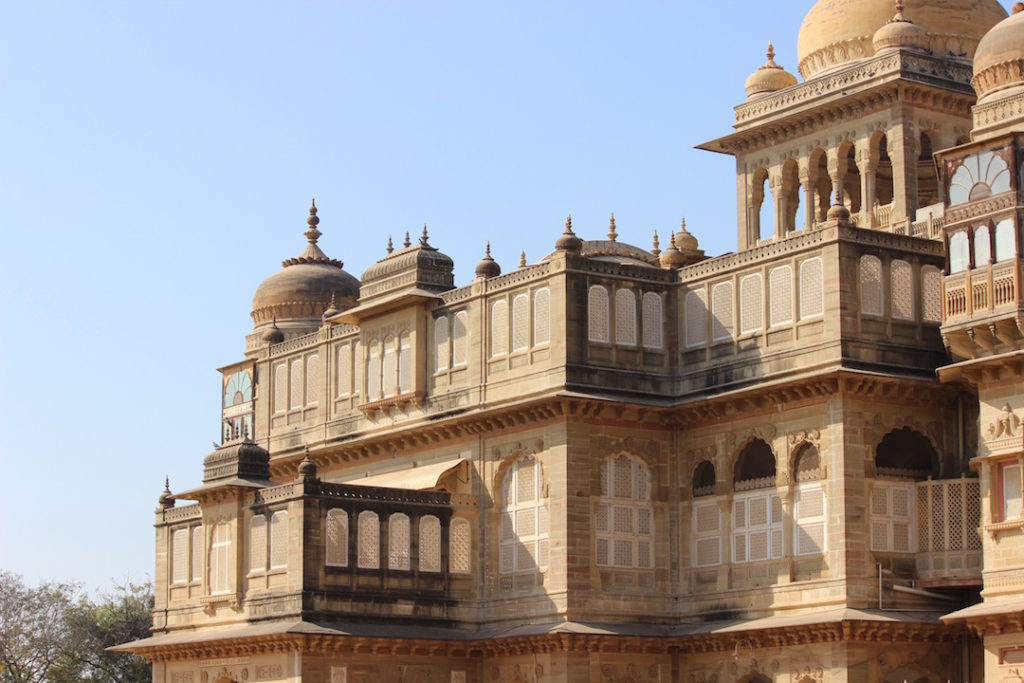 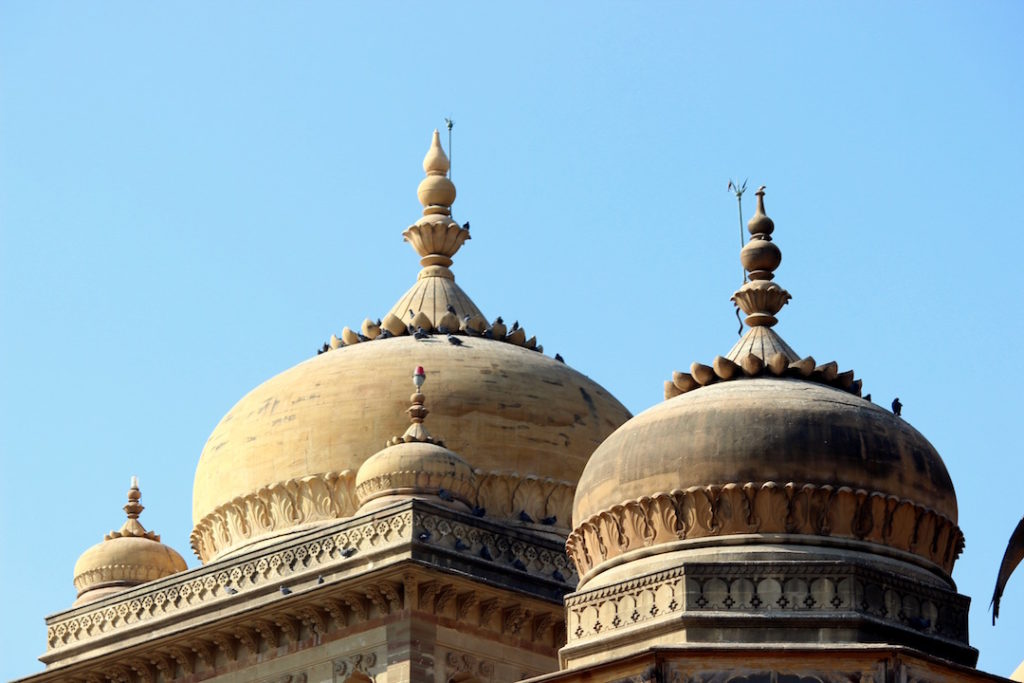 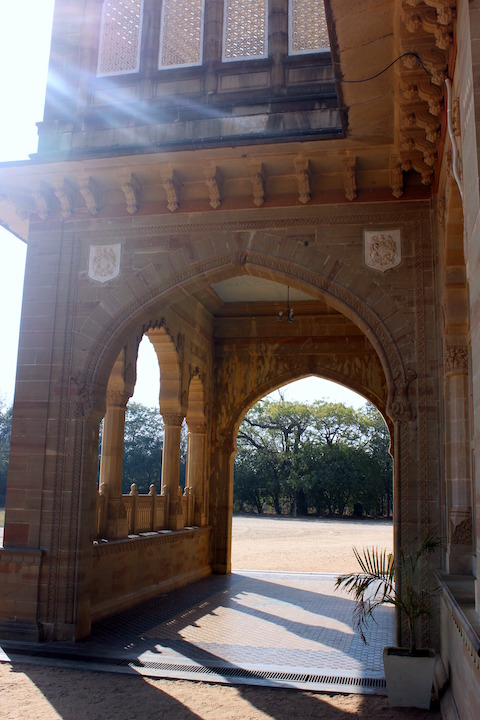 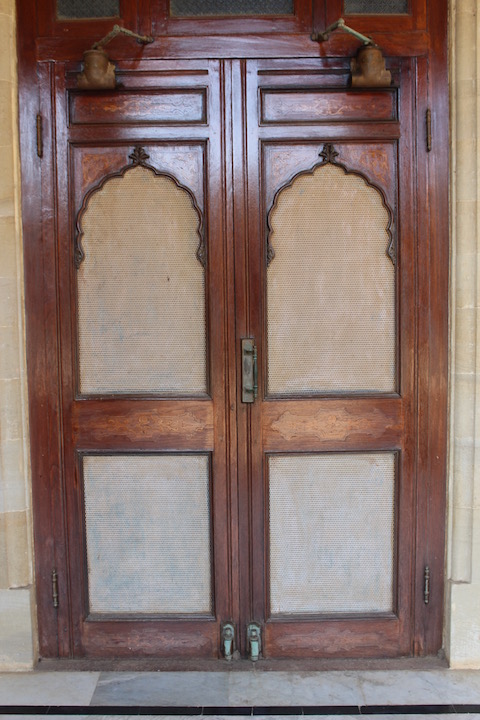 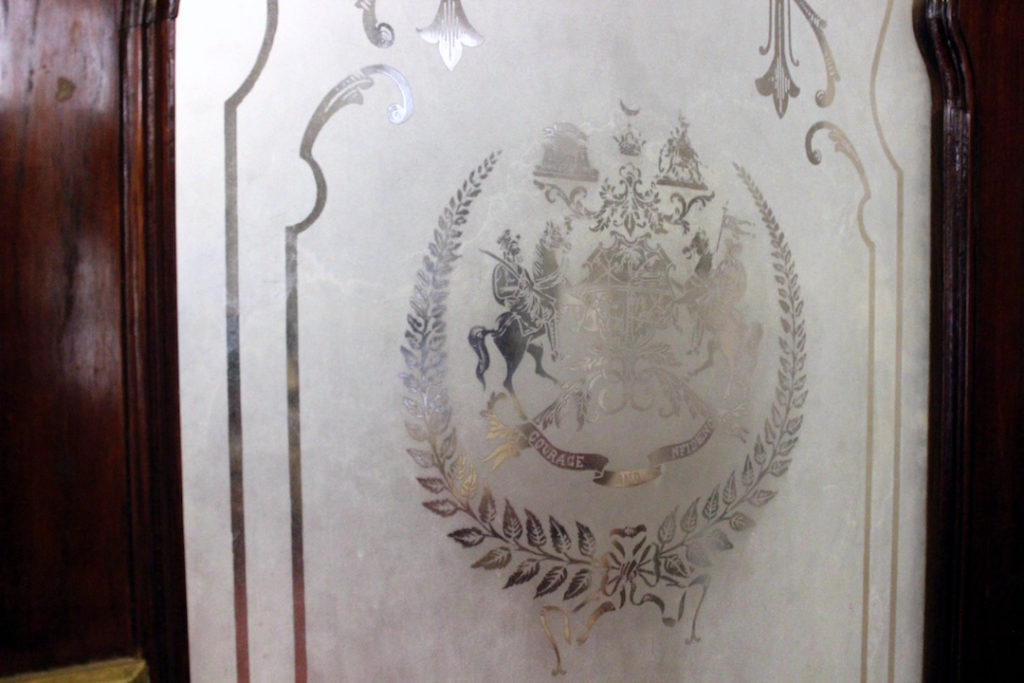 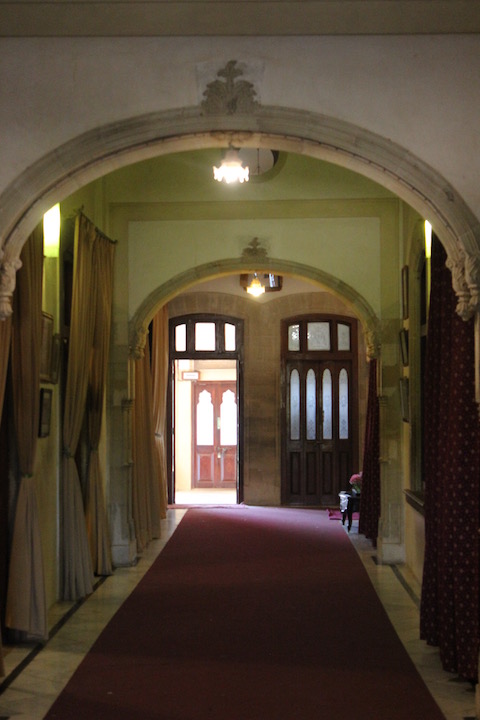 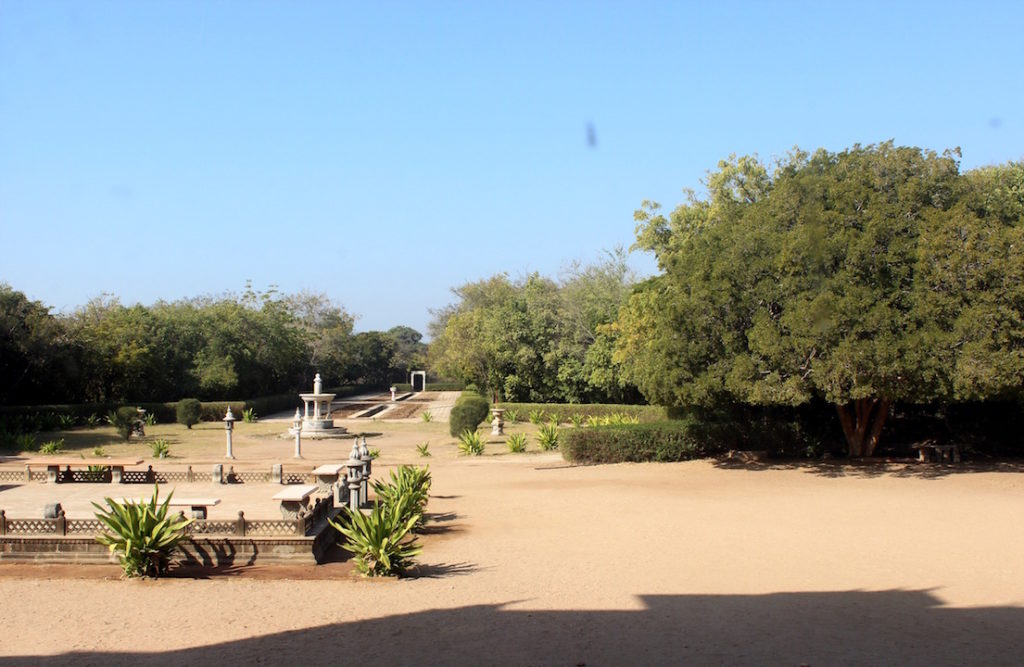 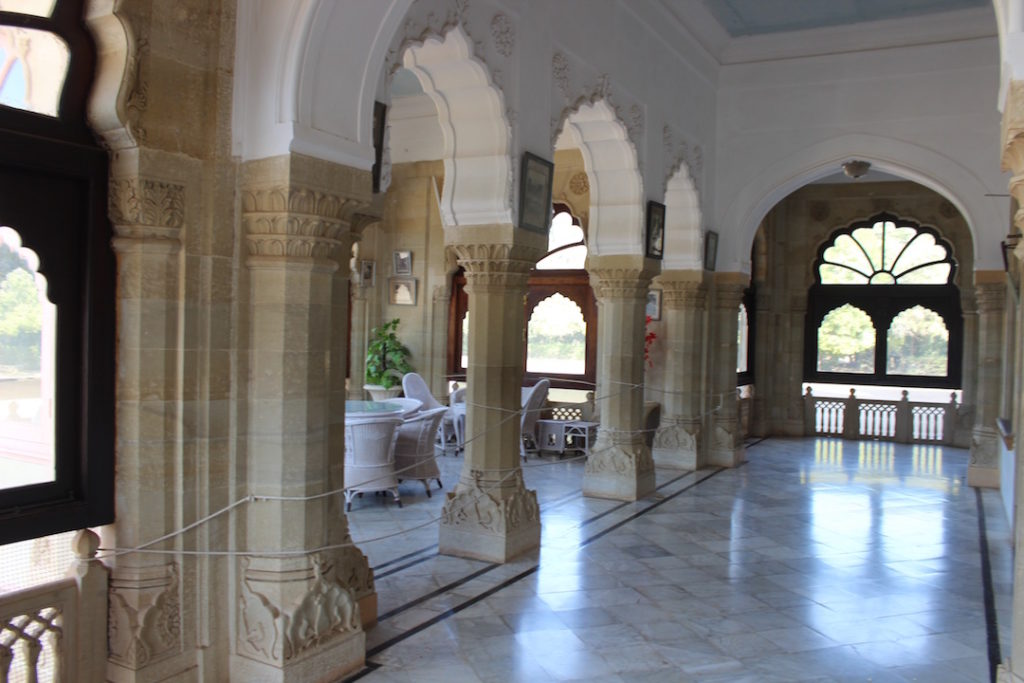 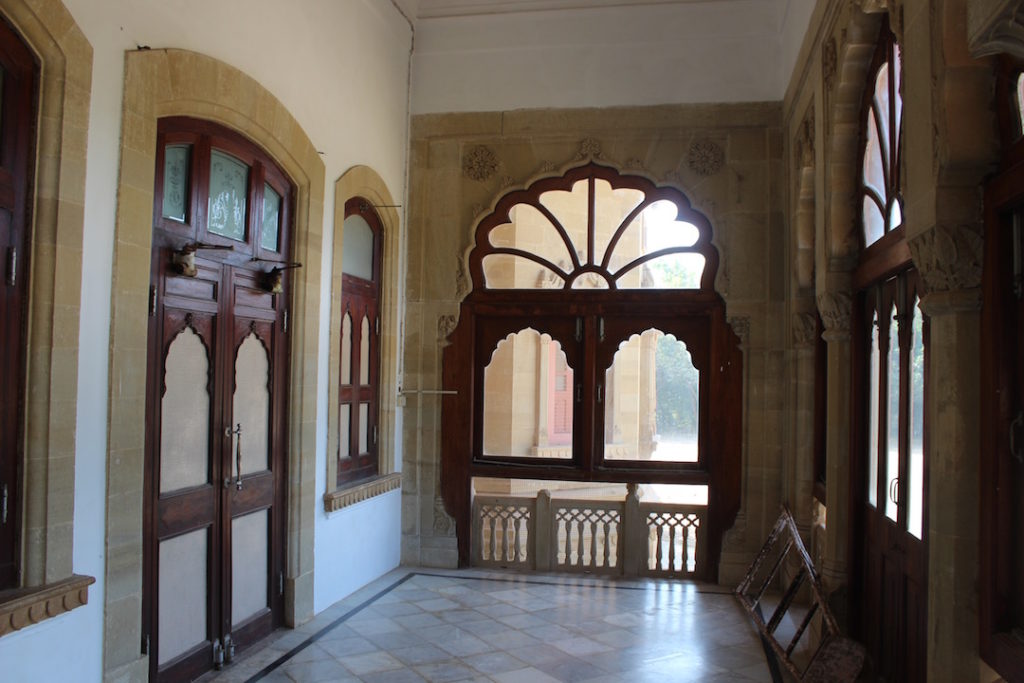 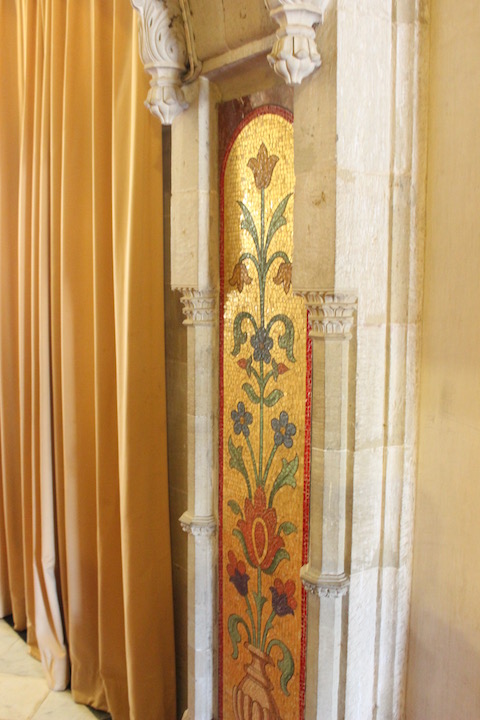 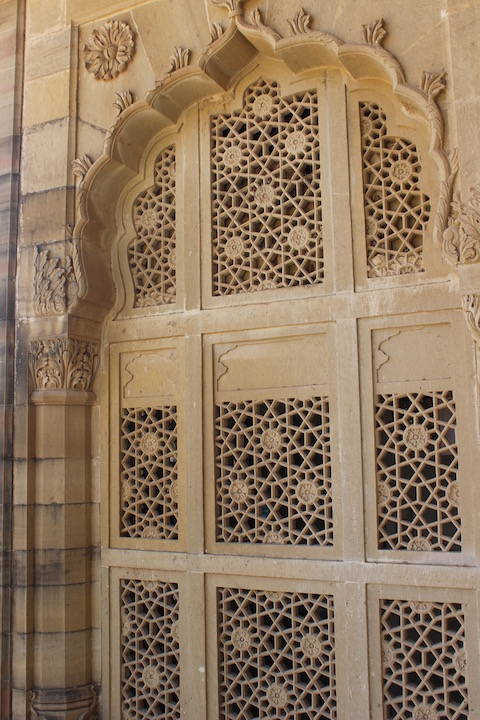 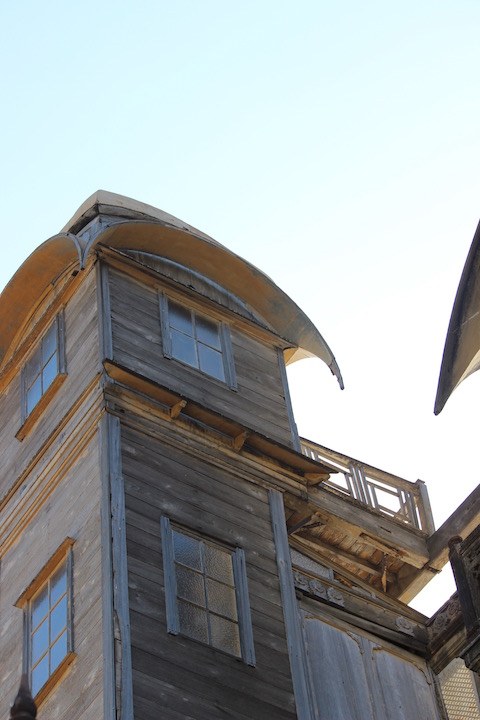 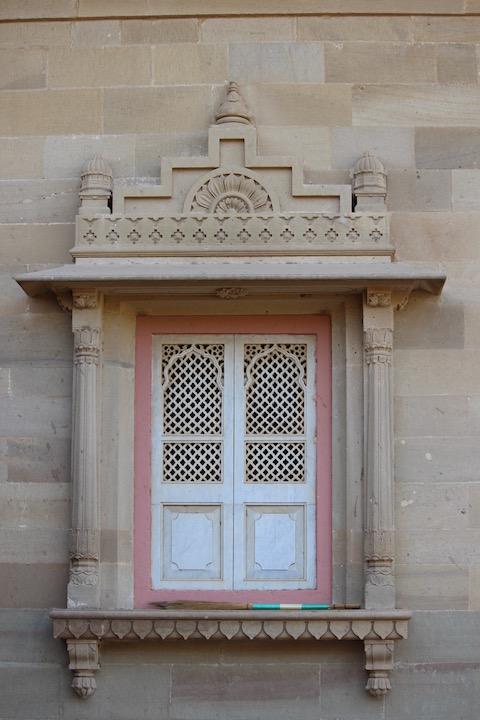 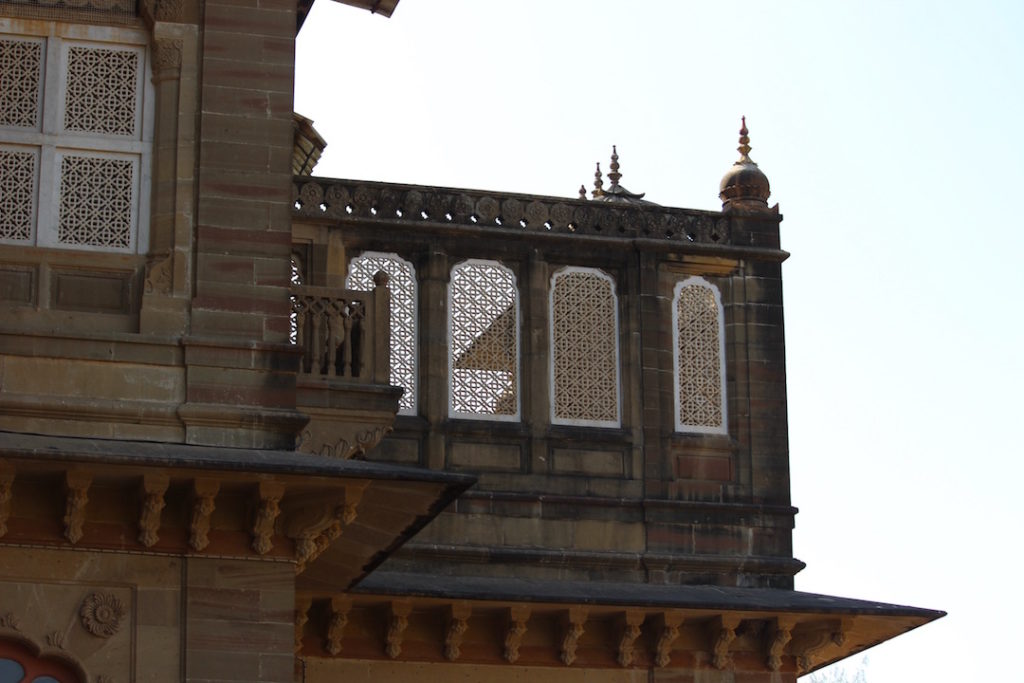 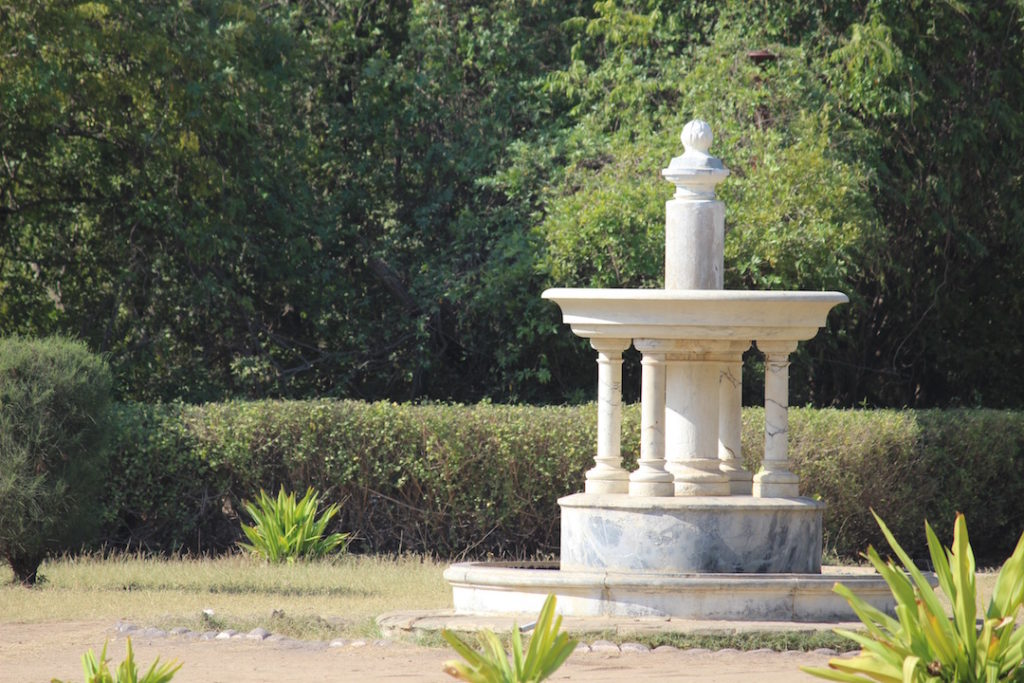 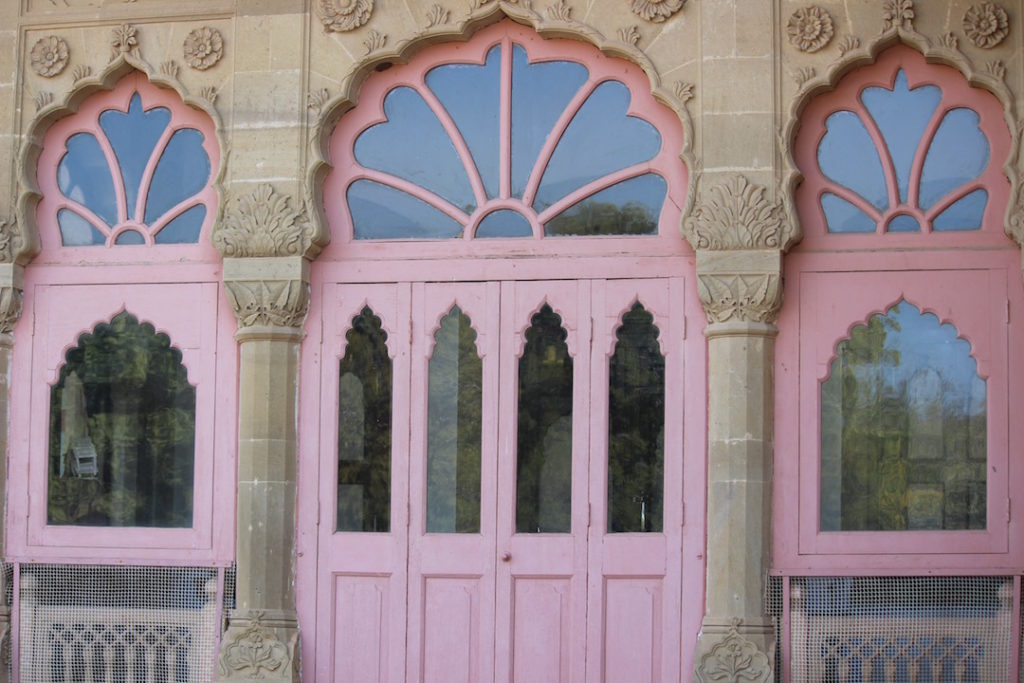 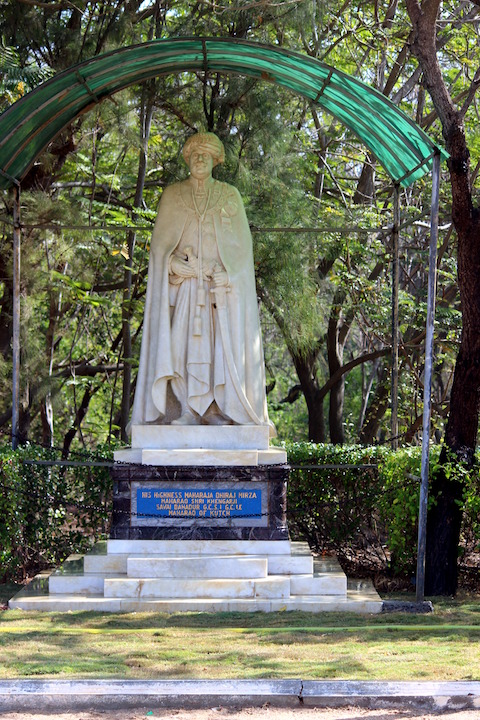 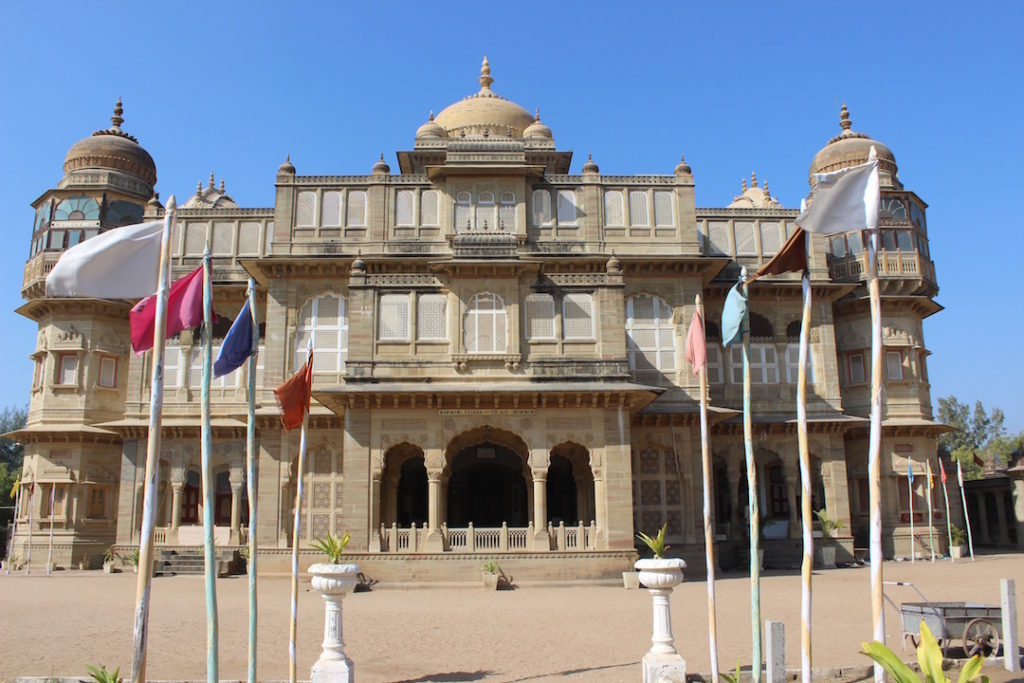 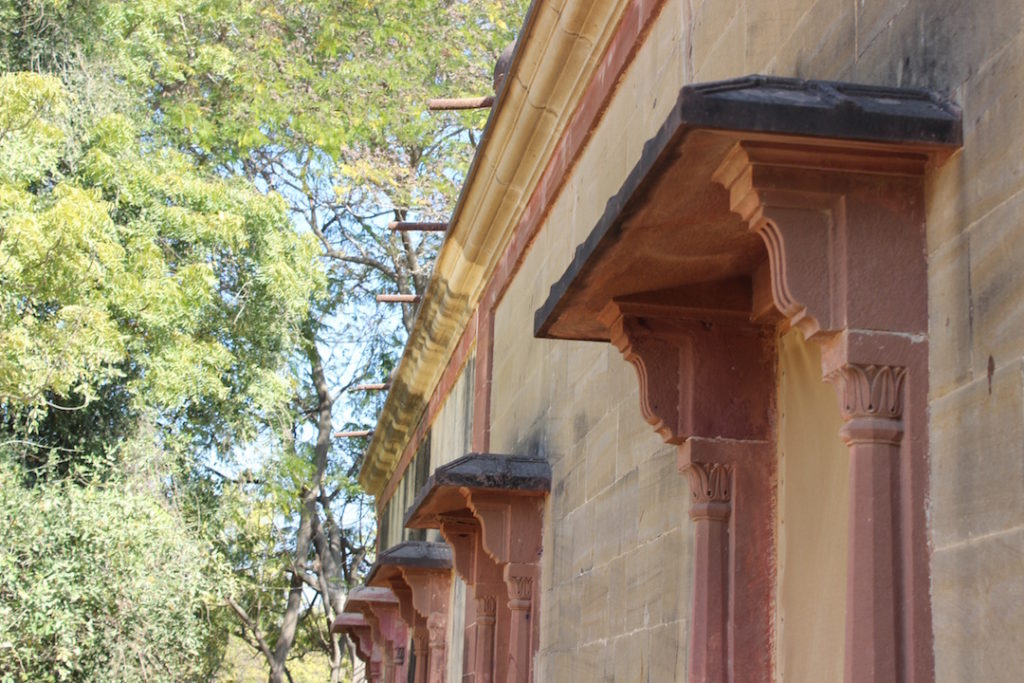 We were done with Bhuj and Kutch and before winding up the trip, one last stop was required. That was going to be Mandvi.. Had read about the historic significance of the place and so was quite curious to see them all.
The first place we headed to was the Vijay Vilas Palace. As we drove into the gates, we spotted a few  camels making their way towards the trees. After picking up tickets [@Rs10 each and Rs50 for the camera] we made our way into the campus. A short walk and you see the majestic Palace in front of you.
Built way back in 1929 by Rao Vijayraj, this palace is small but has some amazing architecture across the rooms and floors. We started on the ground floor, exploring the space, the corridors and getting a sneak glimpse into what life must have been like back in the day.  Built using red sandstone with one central dome, it also has Bengal domes at the sides, a bastions at the corner, and coloured glass windows all across. The palace resembles a English country home from certain angles, esp the plush garden and the way it is laid out.
Artisans from Rajasthan, Saurashtra and Bengal were commissioned to work on the Palace, including Mestris and Suthars from Kutch, all of which reflects in the aesthetics of the palace.
What was meant to originally be a summer abode for the Kutch rulers, the palace thereafter became the Royal family’s residence as well. A portion of the palace has been converted to a Resort [but we dint get to visit that property]. And many Bollywood movies have been shot here [ *eye roll*]
As we made our way up the spiral stair case to the terrace, I noticed how some portions were wood but others were concrete, which made me wonder how much repair work had gone on over the years.  From the terrace, you get a view of the entire area around the palace. The sprawling space some of it remains a forest, other is used by the Resort. All through the palace, the tile work, the flooring, the art work on the pillars, the intricate stone carving & jali work and murals are the highlights of the palace.
While we were walking around the space, a guide kept telling us snippets from the years gone by about the King, his fondness for hunting, the many many photographs of tiger hunting sessions, the stuffed tigers and then showed us the long dining table that could fit more than 20 people. He soon got dramatic and stated this is where the entire team from Lagaan has a meal in the movie in that scene.. and then in this room is where the scene from Lagaan & Hum dil de chuke sanam movie was shot. While I understand that most of the heritage buildings in our country have become renowned for the movies shot in them, I feel sad that history is forgotten. People today relate to places based on which movie was shot there, or which dance sequence they remember… Another aspect that irks me is when the guide tells us “come here and click a photograph, you will be able to get a good selfie here.. and so on”… Sometimes people who travel are so focussed on getting a good shot, that they fail to soak in the place for what it is….  Sigh … am just venting and this isnt gonna change anything I know! But still..
As we left the place, walking back towards our car, I wondered how happy the Royal family were living in this palace.. What was their life like during the earthquake, and since then…
The palace is 7 km from the center of town,
Timings- 9am-1pm and 3pm-6pm.
Entry is Rs.20 per person & Rs50 for camera..