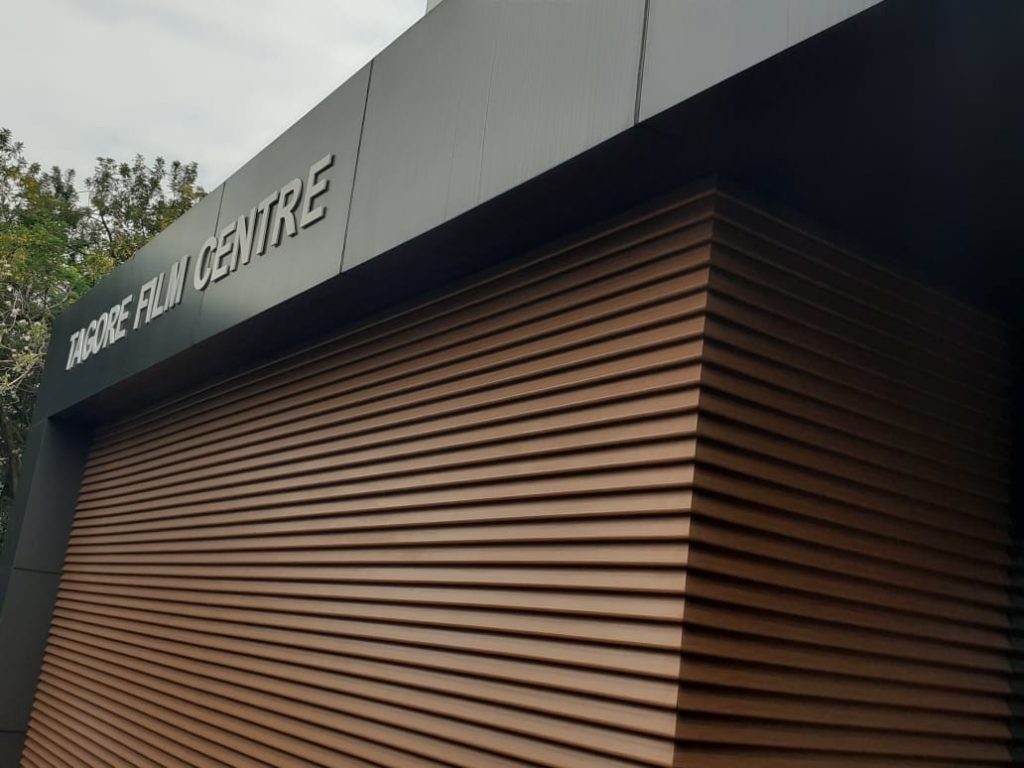 The Tagore NDFC Hall inside the Music College, MRC Nagar

It was one of those days that just happened. I did not make any plans, rather plans fell into place… Athimber who was visiting called me Friday night asking if I would like to join him for a special screening of Shyama Ragam, a movie where his friend Y Gee Mahendran has acted in. I said Yes ofcourse [ for those who dont know me – I love Malayalam movies, to a point where I wouldnt mind them taking over our country’s movie industries] .. He then went on to share details of the venue, timing and we made plans on what time to leave..The movie name was Shyama Ragam, directed by Sethu Eyal and had Y Gee Mahendran & actress/dancer Shanthi Krishna in lead roles.

I picked him up from my parent’s apartment around 9.45, and we reached the venue- Tagore NDFC screening hall by 10.10am. This venue is located inside the Music College in MRC Nagar, and the space is beautiful. The theater can seat about 120-140 people, and there is a small stage as well near the screen. The seats are plush, comfortable and the restrooms were swanky & clean. This was my 1st time here, and I was quite impressed, to put it mildly. We got seated, and waited for the show to begin, which happened around 11am, once Jesudas arrived. Some of the others I could recognise among the audience were Ganesh [ of Ganesh- Kumaresh duo], Sikkil Gurucharan and Maadhu Balaji [acted in several Crazy Mohan shows] …

The movie is about Carnatic Music, actually it is about music and how it transcends religion…Infact the entire movie is a flashback of sorts. It is about 2 people who meet face to face after nearly 20years, and how the past unravels, giving the audience a glimpse to what had actually happened and a fitting end to it all.

Y Gee Mahendran plays a pivotal role as a Guru, who encourages a boy [a non hindu. born to a hindu father and muslim mother] to pursue singing as an art. The 1st half of the movie is all about the boy finding his ground, discovering he is truly talented and the reaction from the town people when they discover their kids are learning music along with a non hindu… It is quite heart warming to watch the scene where the Guru turns down a concert at a temple because they wouldn’t allow the boy inside. Instead, they perform at a small temple nearby to a handful of folks from the area. There is love, affection, drama, side track of humour, the elderly Swami in their house who takes to Krishna cos of the way he cares for the old man and so much more..

And then comes the twist in the 2nd half, when the boy Krishnamurthy and a classmate of his Divya give into temptation and what follows next is what keeps us glued to our seats. I waited to see if the boy & girl run away together, what happens of him eventually, but well, the director had other plans. It is quite an emotional roller coaster from there, my uncle shared that he shed a few tears during some scenes, and I did see quite a few wet eyes as we walked out of the hall after the screening. The joy of Malayalam movie is that they make no nonsense movies that always have a point to tell, and somehow almost all have a character or some bits in tamil…The movies feel very real..

A song from the movie…

I understand that a movie goes through so much before it hits the screens, and some dont get a chance!!

Update from someone in this movie- The censor board clearance was received only recently and for a movie with no major stars, it might be a battle to get it released in theaters.. Hopefully it makes it to the theaters or atleast film festivals.. the movie needs to be showcased, it deserved the limelight.. The plot, the story, the acting, and the music/performances are all amazing.

Some parts of the movie reminded me of Unnal Mudiyum Thambi starring Gemini Ganesan and Kamal Hasan with their difference in thoughts and how things take a turn along the way. But then, those were just a few scenes [the point being music has no religion]

Ok, now onto the 2nd part of the day… By the time we exited the hall, it was around 2pm, and hunger pangs were starting to strike. Uncle said he would like to have lunch somewhere and then head home.. We decided on Thaligai, but then once again plans changed and new plans fell into place. He asked a friend of his if they could give us a ride, and discovered they were headed to Palmgrove for lunch.

Well, that is where we went as well.. Was actually a fun ride, chit chatting along the way and yumm food – Thali. I chose the Andhra meals  [ for the paruppu podi, aavakkai and ghongura, this meal was priced at @Rs205/-] while the other 3 chose the Madras meals [Priced @Rs185/-], but uncle’s friend & wife did dig into the podi and pickle.. Finger licking good food, piping hot side dishes and fresh curd.. Oh not to forget the scoop of vanilla ice cream to close the meal… Am still dreaming about how amazing the beetroot kari, and hot sambar was… not to forget fragrant packed paruppu podi.. Sigh.. 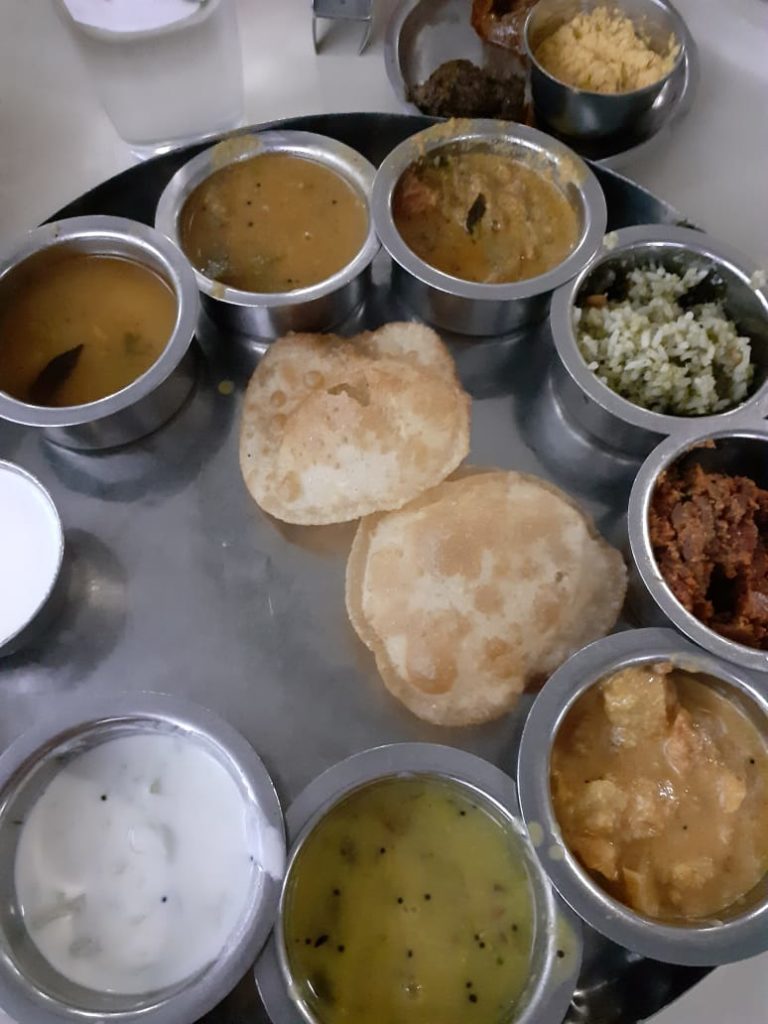 The Andhra Meals , all dishes same as the Madras Meals with add on- paruppu podi, ghongura and aavakkai..

Here’s to many more such fun unplanned days ahead…