After a good night’s rest, I woke up to a new kinda sound, which I heard within a few minutes again…Putting it out of my mind, I got ready for some breakfast before stepping out to explore the city of Kolkata. Since I was staying off Park street, I knew most of the popular landmark places were within walking distance. As long as the weather is good, I enjoy walking and it was fairly chill then. Quickly I polished off the 2 so called Uttappams that were served, a few spoons of the upma[which was good] washed it down with terrible watery instant coffee and grabbed a bottle of water along with my camera and stepped out. 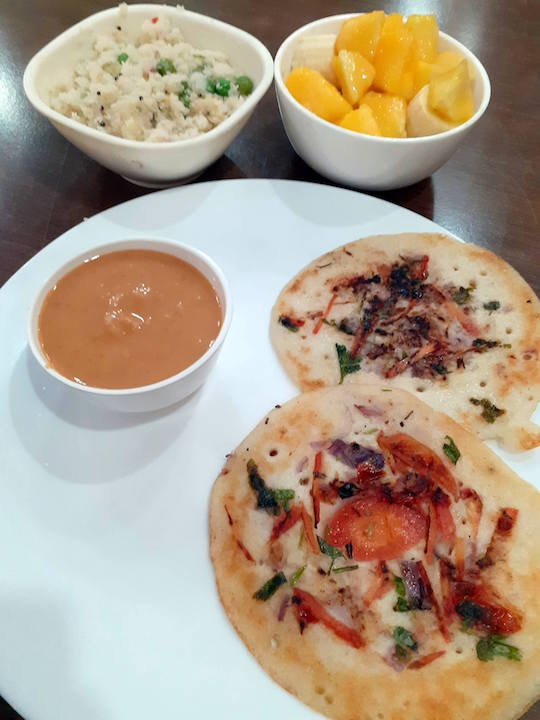 Ahaa, there was the sound as I was walking to the gate. It was the tram, chugging down the road… *made a mental note to ride the tram*..

On my 1st official day in Kolkata, I decided to start with a visit to St Paul’s Cathedral. Turned on Google maps, got a sense of the direction I needed to head in and off I went.

St Paul’s Cathedral –
As you turn to enter the gates of the Cathedral, you cant help but notice the Indo-Gothic style of architecture. The sharp edges, the towering walls and then the stained glass windows.. Oh and I also spotted a cute doggy chilling outside, wearing a jacket.. Once you enter the Cathedral and turn left, be ready to be blown away. The main hall is just WOW, I was stumped for a few seconds, had to sit down to catch my breath. All around me were rows of seats each section with titles on them , ranging from “Tirunelveli to Pune to beyond….” I wonder what they are. This church was completed  back in 1847 & is known as the first Episcopal Church of the eastern world.

Some interesting facts about this Cathedral –
-> It is 247 feet in length, 81 feet in width and 114 feet at transept
-> The tower is modelled after the “Bell Harry” tower of Canterbury Cathedral.
-> It is also said that the overall look of this Cathedral bore close resemblance to England’s Norwich Cathedral with three Gothic stained glass windows and two frescoes in Florentine Renaissance style.

After spending a few minutes inside, I walked around the premises, taking it all in, amzed at the architecture… As I walked out of the gates, I was left wondering if the walls had any hidden history, were there any Bishops buried in this place.. Turning the corner, I noticed the Birla Planetarium was right next door. Walked in to check if they had a museum or a show, and was told there was one going on as I enquired, in Hindi. The English show was an hour away, and the pass also gave me access to the museum inside. I did not want to wait that long, so instead walked around the place and decided to head out to The Victoria Memorial.
Note: Photography is prohibited inside the Cathedral. 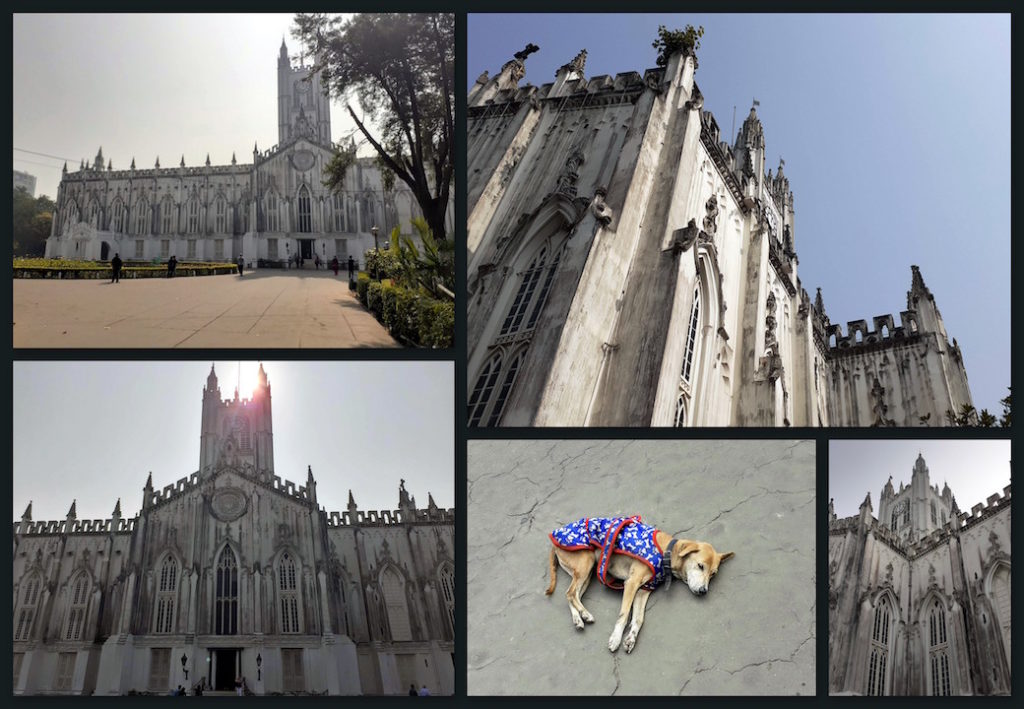 The Victoria Memorial-
Google Maps told me the Memorial was literally across the road, the entrance a short walk away. Crossed the road, and was walking on the sidewalk when two transgenders got up, came over. I shook hands, wished them good day and went on my way. One of them asked for money, but the other just smiled and waved me along…

On my left was the Victoria Memorial Gardens, huge open space that had a water body in the center and benches full of people [some couples making out], others looked like people resting their feet in the shade. Found the ticket counter, paid Rs20 for the ticket and this also gave me access to the gardens..

The place is beautiful, grand even… As you walk along well manicured garden, the building looms large, growing bigger with every step. This Memorial was built somewhere between 1906 and 1921 to commemorate Queen Victoria’s 25-year reign in India [her reign ended in 1901 when she died].

This huge white-marble museum is the main attraction in this place. It is made entirely from Makhrana marbles from Rajasthan,and contains quite a collection from when the British empire ruled India. The beautiful steps that lead up to the museum, the giant pillars, the towering ceiling are all well maintained and needs to be in person. As you cross the front rooms [the Durbar hall, the verandah and the space near the entrance] filled with war memorabilia, paintings and more into the central room, the Tall statue of Queen Victoria, and the great dome that is decorated with stained glass windows and sculptures will leave you speechless. The walls adorn sculptures, words, and collectibles from various parts of the world. The richness of the architecture is what sets this place apart from any other you have been to, even the Taj mahal. You can take the staircase to  the higher floor and walk around the space, enjoying the art work on the walls.

I wandered around the place for a good few hours before heading out to explore the garden. The Memorial is situated on 64 acres of land with the building covering 338 ft by 228 ft.

Note: Photography is allowed inside, just don’t use Flash and beware of the selfie lovers who will hog every space possible… :/
The place is shut on Mondays & National Holidays

I had reached the other side of the Memorial, a different entry/exit point and was heading out to the road, when I spotted an artist, a living statue of sorts, who was covered in gold paint, and looked like Michael jackson. He would do a few moves and stood still for a few seconds.  It was so cool, and then there were stalls selling water, chat, juices and snacks on either side. 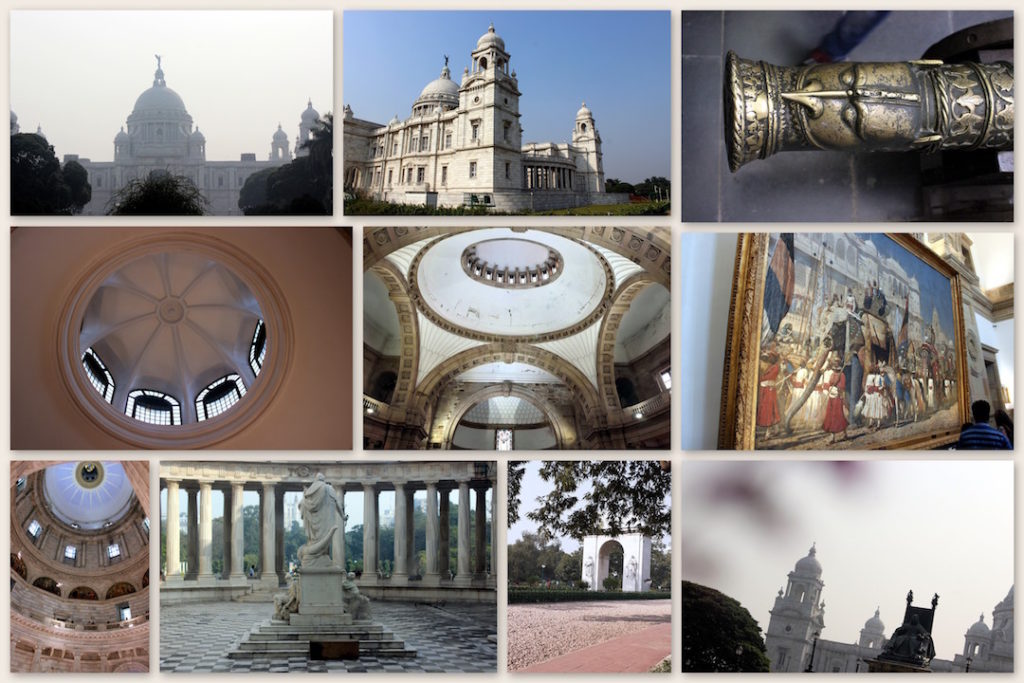 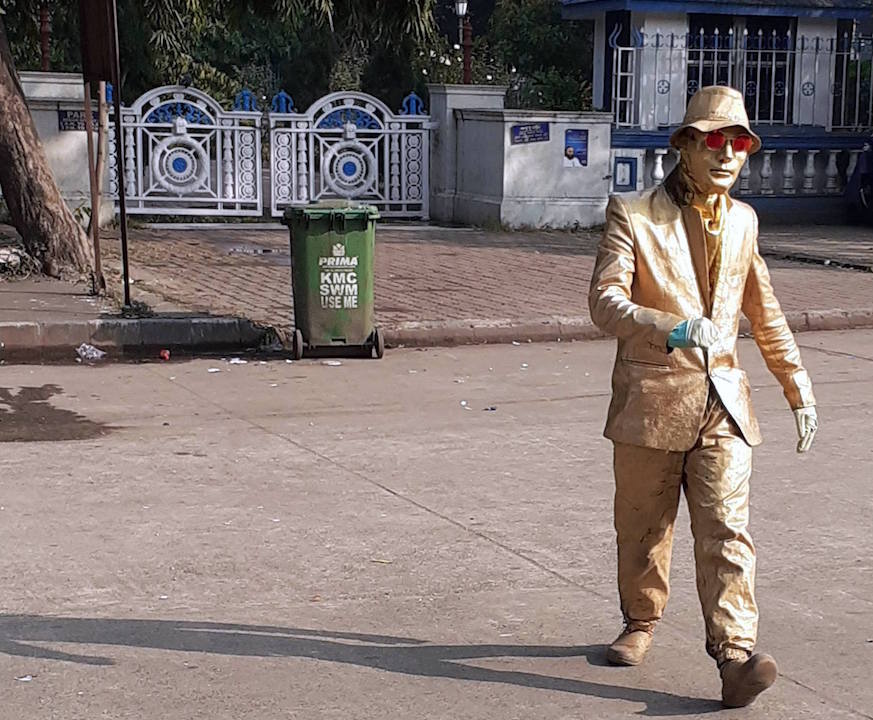 Kaligat Kali Temple
Every single person I spoke to about Kolkata had something to say about this temple and most of it was not pleasant. They all spoke about how crazy it was, the pandas [priests] demanding money, short of putting their hand into your bag grabbing what they can and so on. Throwing caution to the wind, I decided to visit the temple, which is quite popular and among the 52 Shaktipeeths of the Hindus.. Apparently the temple is over 200yrs old and has grown in size over the years.

Legend has it that when Shiva was carrying Sati/Parvathi’s burnt body , various parts fell along the way on Earth. The right toe is said to have fallen here, which is where the temple was built. Another name for the Goddess is Kalika, which could be the source for the city’s name Kolkata.. It was surprisingly not very crowded and nobody bothered me as I walked around the premises towards the main sanctum. Got a good darshan, was surprised to see the main Goddess here was made of Black Stone and she had a long protruding tongue,  which I was told was made of pure gold..

Headed out of the temple premises, hailed a cab and was ready to go grab a bite to eat. Was quite hungry…

Bachan’s Dhaba-
I wanted to dig into a plate of good Bengali Food. Hopped into a yellow taxi, and all I told the driver when he asked where I wanted to go was “Jahan pe acchcha sa Bengali khaana milega, wahan lekhe jaayiye please” [wherever I will get good bengali food, take me there pls] and he did… Dropped me off at  Bachan’s Dhaba in Rash Behari saying ” yeh pancy nahin hain, par khaana mast hain madam”  [no fancy ambiance, but amazing food]. I thanked him, and hopped out for lunch.

A very basic hotel that was buzzing, infact as I entered I noticed the seats were all taken. A guy from behind the counter told me there was space upstairs. Gingerly made my way upstairs, past the kitchen, around staff carrying plates of food upstairs and found a table for 2. When looking around, I noticed almost all tables had plates of rice and meat based side dishes.. A waiter came, asked what I wanted, put a menu on the table and disappeared, giving me a few minutes to decide. I ordered a plate of rice[ I asked for Plain rice, but was told only Steamed rice was available.. apparently Plain rice is regular rice, while steamed is Basmati which is more in demand] and Egg tarka/tadka along with a fresh lime soda [salt].. Now my drink order stumps the staff, everywhere. They repeat “salt? or salt and sugar?”.. I have to stress on the salt and mention no sugar couple of times but still I end up with a glass of fresh lime soda sweet.. Sigh…

Anyways, within minutes, the food arrived and I dug in happily. The Egg Tarka was kickass , it was basically moong dal cooked down with spices and eggs scrambled in it. Since I love eggs, I loved this…  Paid the bill, which was under 200bucks, and got out of the place, wondering where to go next. Oh and I packed up the remaining Egg Tarka and had it as it is later that evening..

Note:
*Order rice with any side dish and it will come fast… Other items take longer..
*Oh and must tell you that this hotel is highly recommended and so is the Egg Tarka here.. Don’t forget to try it when in Kolkata 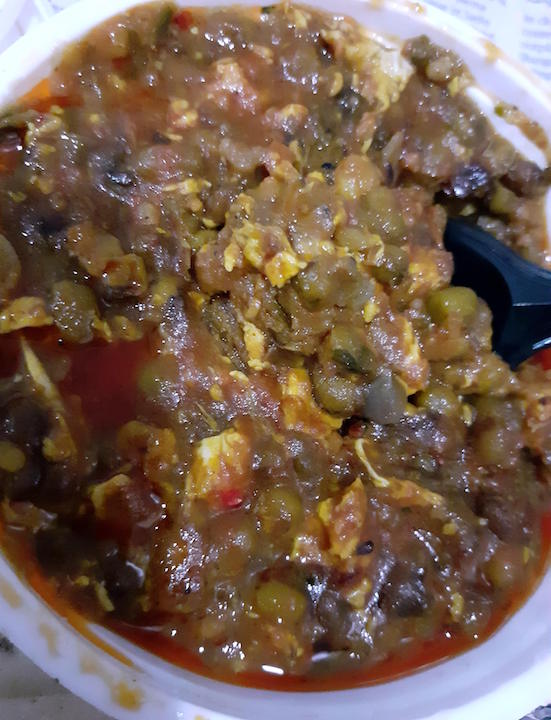 Tram Ride & Cha Bar, Oxford Book store–
It was around 4.45pm, decided to head back to the hotel, and rest a bit before exploring the markets around there later in the evening. Just as I got off the cab near the hotel, I spotted the tram pulling in from around the corner. Waited there, wanting to ask about ticket when the driver just waved me along asking me to hop on.. I did, paid Rs10, got a ticket and took a ride to Chandni Chawk bazaar, which was about 2kms or so.

From there, as I was walking back to the hotel, got a call from the food/travel blogger friend asking if we could catch up since he was in this part of town. We decided to meet at Cha Bar inside Oxford Book store on Park Street. This was about 10-15 mins from where I was and so I quickly got into my room, freshened up and hit the road again.

Park street is where you will find all the hotels, coffee shops, high end brand outlets and more, including The Park Hotel. The Oxford Bookstore is few yards from The Park hotel, and I noticed it was close to Kusum Rolls [ famous for their Kati Rolls].

By the time I reached Cha Bar, he was already there.. Anindya & his wife Madhushree are Pikturenama [on Fb & Instagram]. Have been following them for a while and had pinged saying I was going to be in town and if possible we could catch up. We spent a few hours talking about our work, travel blogging, food space, and shared a cup of Assam tea. After the meet, I went around the store, picking out a few postcards, browsing through books before getting out to walk back to the room.

He had suggested I try rolls from Kusum, Biryani from Arsalan Restaurant or Royal india restaurant. Apparently, the biryani from these places were the only ones that had potatoes in them [ in Calcutta, almost every dish will have potato in it, be it veg or non veg] 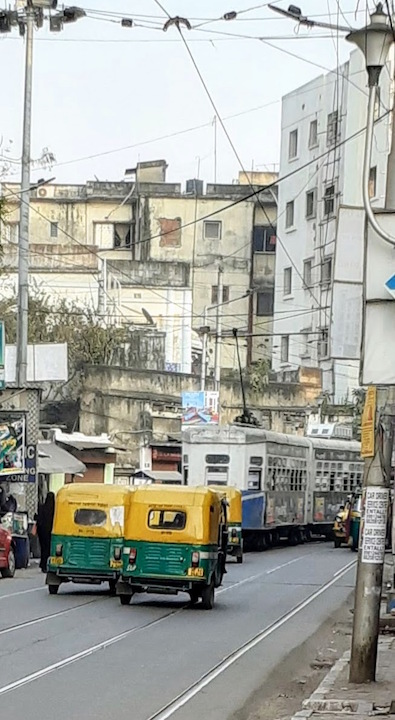 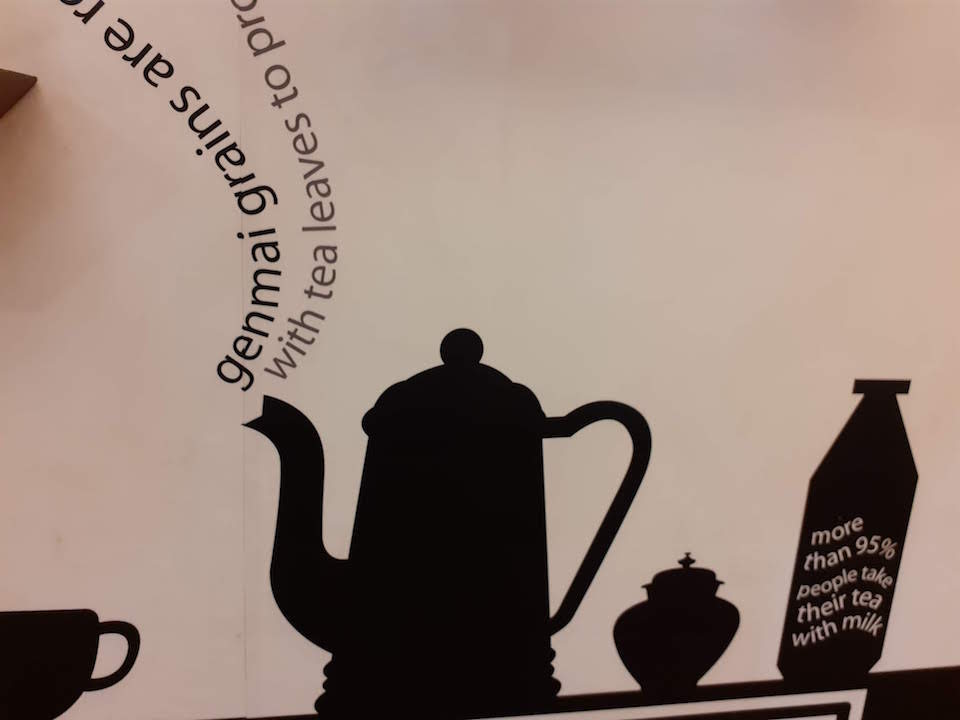 I walked around Park Street for a while, grabbed a cup of chai from the roadside stalls and got back to the room. And that was the end of my 1st day in Kolkata. I slept dreaming of all that lay ahead for me to explore.