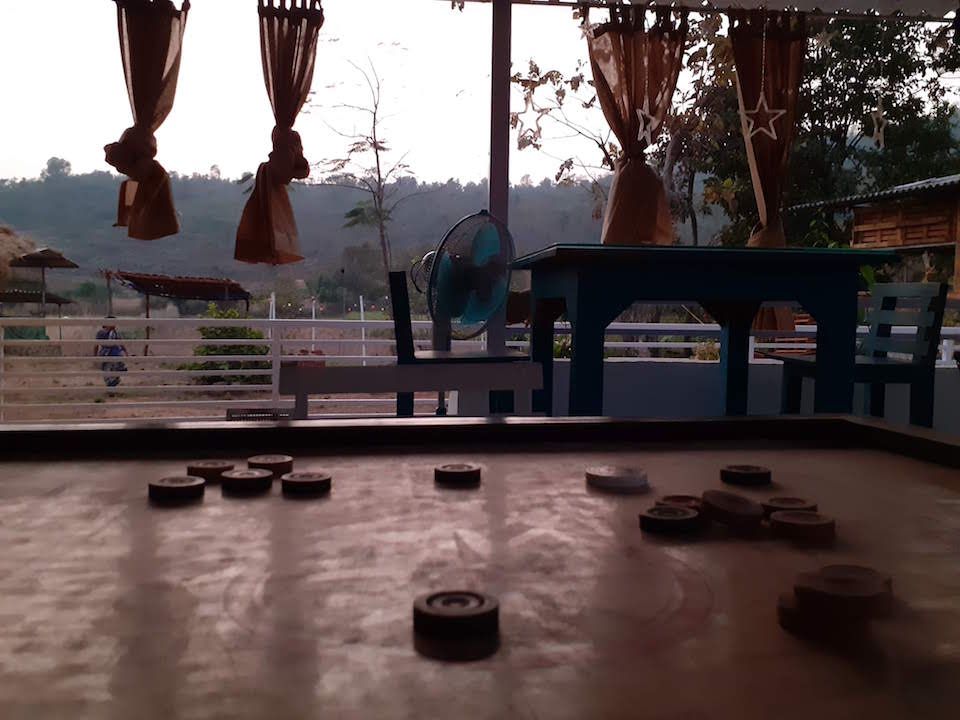 A game of carrom… look at the view ahead… Phew.. 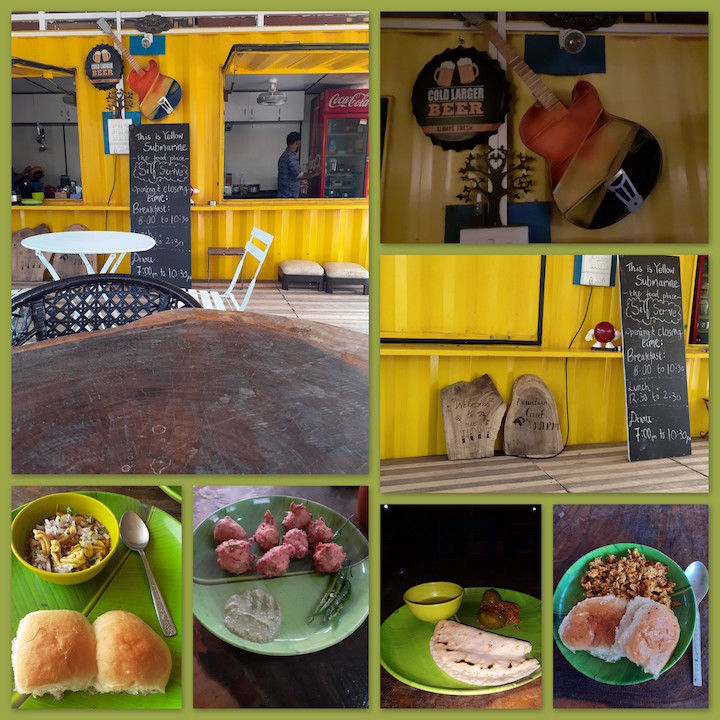 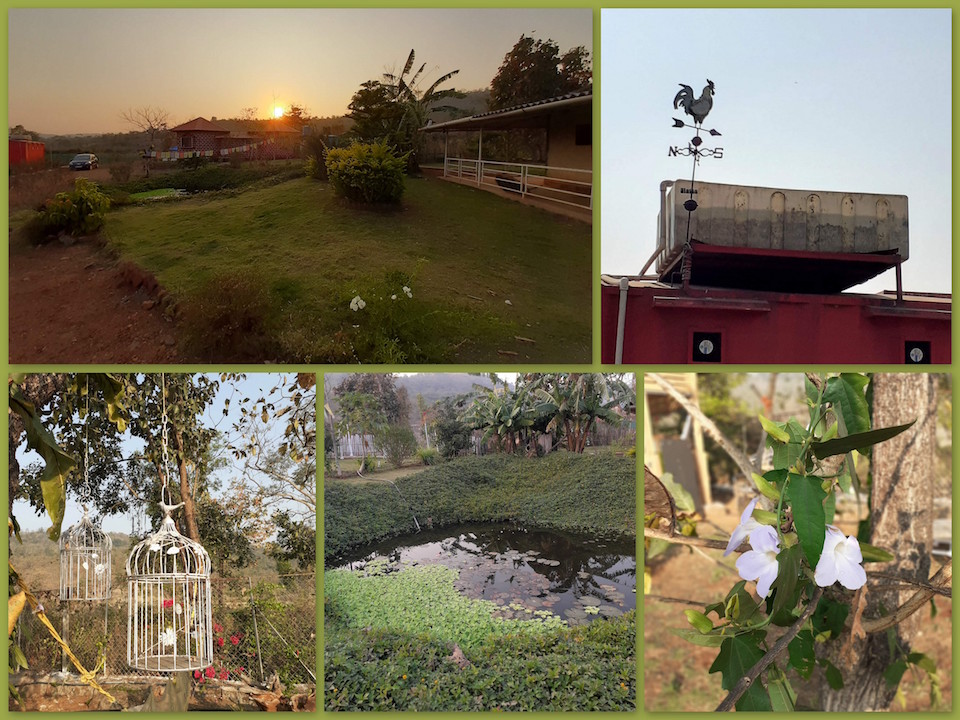 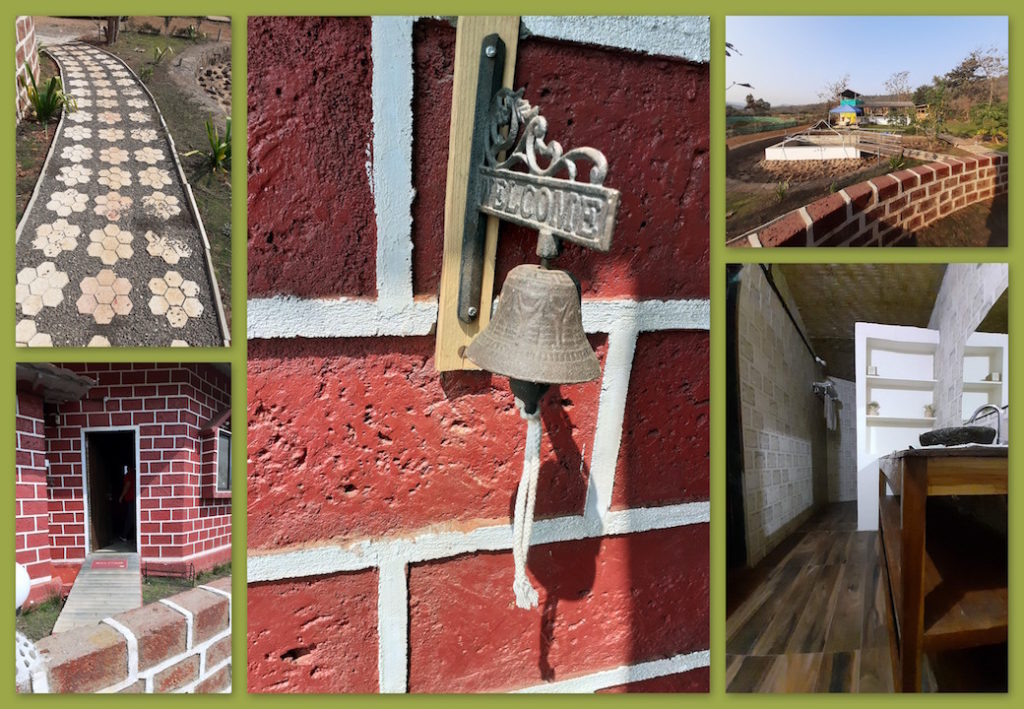 We had 3 days, and therefore wanted to make the most of it and so started were looking for places that we could getaway to.. The only things we knew was that it would be a road trip, and the place should be offbeat and secluded, apart from being inexpensive.. Since both of us are into budget travel, we started looking at Airbnb properties in and around Bombay- Nasik, Pune, Lonavala ….

And that is how we discovered Mountain Goat Farm, Mangaon..

Few messages to & fro, discussing how the property looked, the location, checking availability for the dates we wanted to travel and that was it. I landed in Bombay around 7.45, and after a quick breakfast, we were on the highway towards Mangaon. The 100 odd kms took us 2hours and by 12pm we were at the property. It took us a few minutes to find the place, since Google maps was insisting we go via a road that was meant for walking and not a car. We retraced our steps by a few kms, and decided to try again, which is when we spotted the board around the bend and voila, there we were..

There was not a soul when we pulled into the property, but within minutes a lady came running, apologising and said she couldn’t hear our horn from the gate to where she was. She showed us the room, and brought 2 bottles of water [they use glass booze bottles for water and as light holders.. ]

The first thing you see is the open space, and farm like atmosphere. There is a vegetable patch, a small pond of sorts, and even a small pool [ that was empty & can be filled on request along with a small canopy like area where you can lounge after a swim]

Right next to it is the Yellow Submarine [a big yellow container], the dining area, kitchen and chilling space. The couple Ganesh and Nikita are the ones who take care of the guests and the property. Between them, they handle everything from check-in to cooking, to working the generator and more.  During meals, food would be laid out near one open window and it is self service. They were so sweet and obliging, we had a blast and loved the food they whipped up. The bbq on the 1st night was fun, a small makeshift grill was set up and an assortment of veggies & meat was cooked and served up. The tea carried strong lemongrass flavour [ freshly plucked lemongrass eaves from the bush near the fence]

Actually everything you have is from the property- eggs, vegetables & spices… Eggs are from the chicken that run around through the day, clucking away, and as the sun sets, like school kids they run back to their home.. Oh, we were surprised to see them run towards the gate in the morning [all ran together, again like school kids], apparently grains are laid out for their feed there.

There were 2 dogs on the property- Caramel & Sunshine, locked up in a kennel cos they had killed few chicken. So when the rooster/hen/chicks were out, dogs are locked up and in the evenings you will see the dogs running about & they came to play with us as well. Such a fun sweet pair.. They would find ways of entering the dining/game area, hop over the fence, or jump on the flower bed- the chair and inside..

Activities- You will find plenty of games- Carrom board, Uno among others and a giant boombox of sorts that is a bluetooth speaker [you can play music from your phone/device]. The space is very casual, with plenty of lights all around.

In the evening, you can play around and turn on whatever lights you liked- we had the star ones on, and added one more when it was dinner time. There are colourful fairy lights all through the place, and some of them are turned on in the evening. It was truly romantic and cozy.

There is a separate shed of sorts for children to play in. It was completely created with wood from crates and had colourful furniture and enough options to keep the little ones occupied.

All through the open space there are hammocks for one to lounge in with a book or just laze in.

I also spotted a red container near the parking area – it was additional restrooms and shower, for the campers.

When we met the owner of the property Mukul, he mentioned pitching a tent and sleeping whenever he visited  [if both the rooms were occupied]. Oh and I asked him about the name of the place for which his response was “most members in my family are Capricorns, and hence the goat, plus we are from the Hills- Uttarakand] 🙂

All around the property you will see nothing but mountains. Mukul told us one can trek upto a certain point on the one beyond the rooms, but then it was dense forest and tough to walk through.. he also told us Lonavala was beyond the mountain.. On the other side was Aamby valley [at night we would see lights atop the mountain, which were villas or private properties].

Food- You have option of a la carte style or package- a la carte as the name states, you pay for each of the meals, and package is slightly cheaper and includes all meals [ breakfast, lunch, tea and dinner]. The food is reasonably priced and you get to enjoy local fresh produce. Do give them a heads-up about food [veg/non veg- what meat you prefer] allergies etc so they can plan your meals with ease. We got them to make Usal one morning with Matki [mot bean/moth bean/turkish gram] that was harvested from the farm, and it was heavenly. The rice served is also from the farm and the harvest is good enough for a year is what we were told [it is the large granule variety]

Power- There was plenty of power failures when we were, but there is a generator that is switched on immediately..

There are only 2 rooms, but they are quite spacious with an attached bathroom. They can add an extra bed if you need one..
There is fan, ample plug points, a kettle with some teabags in case you feel like making some tea.
Apart from this, the usual towel, toiletries etc were provided.
No Air-conditioning.. [when we went it was cool in mornings and later in the evenings, but afternoon [12pm to 4pm] was fairly warm. The fan and breeze helped stay cool. I bet the property even more fabulous when you come in Winters.
No TV or Internet
Rooms are priced at Rs2500 per night..+ airbnb charges a small fee for their services…

Since it was just us for the duration of our stay, it was amazing. We just lazed and chilled, ate and slept plenty. My phone was completely dead [ Airtel], while Vodafone/Jio worked in certain spots, apparently BSNL works best [not that it mattered]. We watched some shows on the iPad [that had been downloaded], grooved to music that we played on the speaker, read a book and generally enjoyed just unwinding.

The first evening we spent a few hours playing Carrom, trying out different games we knew and then switched over to watching one episode of Witcher on the iPad[ had been downloaded before the trip] & an episode of Archer as well- with audio playing from the bluetooth speaker -it was something alright! Surround sound effect…  The 2nd day, we discovered UNO, which then had me thinking about card games, and I mentioned Rummy which we decided to try with UNO cards, and thus RUNO was invented.. so much fun and craziness, new rules were formed as we went along [ it was so much fun that we played with few other friends upon returning to Bombay as well]  and watched the 2nd episode of Witcher as well. And then before we knew it, time had come to pack our bags and bid adieu, but not before a scrumptious breakfast of egg burji and pav.

It is the perfect place to go if you are ok with some digital detox, and absolutely nothing to do. You can walk around the property, relax in one of the seats, have many cups of tea and bite into hot pakodas and enjoy the silence all around. The place is suited for couples and families, or a group of friends as well, it has something for everyone~!

Just make sure to have your own mode of transport, although am guessing an auto/cab from Imagica Theme Park might be possible [do check, distance I think is about 20 odd kms].

Mukul is super chill guy,he was in touch and is a call/msg away. He also mentioned he visits most weekends unless busy, with his family & dogs… That weekend he was replacing some of the light fittings that were lost due to the wind storm and had started project “build a table” and was at it when we checked out of there.