I began cooking at the age of 3, well it started with making dosais and till date gramma talks about how I would patiently work at it on the tawa and flip it.. I wasn’t one of those impatient kids or naughty ones who spilt things and ran around hyper~ Well, it is heartening to know that my love for cooking & food began at an early age.. But then I don’t think I cooked anything till I got to 11th standard, which is when I began whipping up something interesting for lunch – Noodles, different kinds of rice, bread upma, aval etc..

I have had friends and others asking me  “Where did you learn cooking from? Which book or channel did you watch?”. The answer to this is “none of those, my gramma.. she taught me the basics and some of the dishes from the Traditional cuisine” The very 1st dish I made was Morkozhambu. It was sometime in 2000, I was living with my grandparents then, gramma was unwell and so I decided to make lunch. Gramma told me how to make morkozhambu and must say it turned out yummm. From there, no looking back till date. She has taught me vethakuzhambu, avial, porichakuzhambu, koottu, pitla, and everything else in between. Whenever I have a doubt, she is the one i turn to for clarification.

She has all these rules –
~ if you are making a dish with radish or onion, no Asafoetida,
~ for dishes with coconut, you temper using coconut oil
~ No jeera in most tempering except certain dishes
~ when making sambar or rasam, you always start with the tempering before adding tamarind paste or the veggie
~ for pulao, always gently saute the veggies in butter/ghee
~ add a dollop of ghee to Upma, Pongal and even Avial just before serving it.
~ add a tiny pinch of sugar to coffee filter before pouring hot water on the coffee powder. It is said to enrich taste and increase quantity of decoction yielded
~ certain days call for certain dishes to be made [ Amavasai means one dish with raw banana has to be there]
~ on the day after karthigai, adai should be made for dinner… and more…

She too loves watching cookery shows on TV/internet with me and we love experimenting new recipes. She & Granpa have always encouraged trying new things and will always be willing to taste whatever I whipped up, giving me insightful feedback. Infact, when they got back from their US trip [1999], they found new love in Pesto, pasta, subway sandwiches and many other things. It was such a treat serving them dishes from newfound recipes…

This reminds me of a food show that used to air on TLC where the kid spoke fondly of his Nona, who had taught him most of what he cooked. He travelled and featured elderly women from various parts of Europe [mainly Italy] cooking traditional dishes. This trend continued on Masterchef as well, so many contestants would speak fondly of their grandmothers & how they learnt cooking from them. This is what got me thinking- a lot of us have our gramma’s to thank for the food we put on the table.

I started talking to friends, and also did a poll on twitter. There were quite a few, including a close friend who said they learnt from their grandmothers 1st and then from their mothers. We learnt a lot by merely watching them in the kitchen – be it chopping, or grinding and cooking up dishes that seem complicated, but are quite simple. 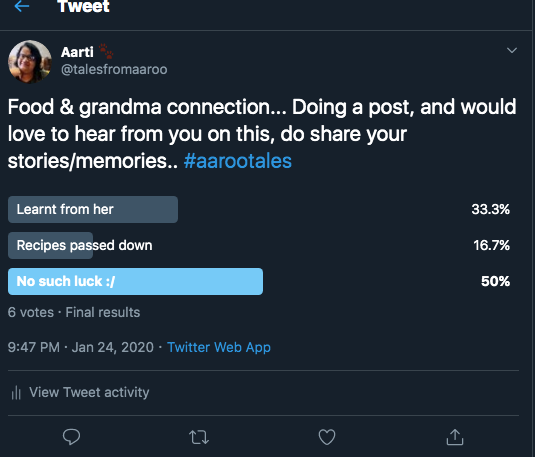 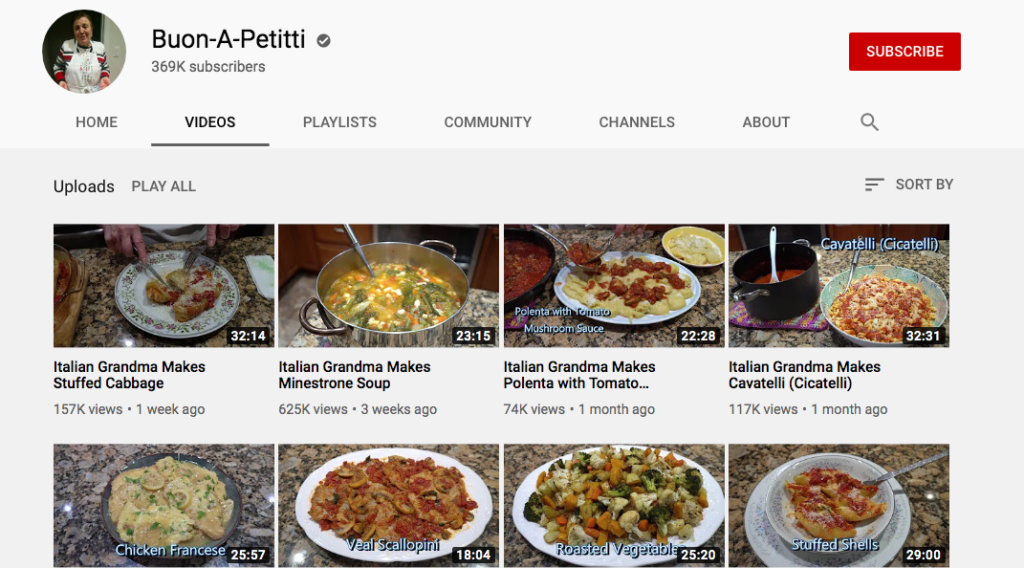 Things I have learnt from gramma….

Cook by judgment rather than measurements  – I always cook based on my judgements.. When making a dish, I would add a spoon of oil [straight from the oil can], add mustard seeds, fenugreek seeds, red chillies all based on my eye and never based on spoonfuls or numbers… And this works for all dishes [except sweets & baking where measurements are key].. It was always about “using your intuition”.. Another thing I learnt is never go overboard with spices or masala, the dish needs to sing well on its own.

Make everything from scratch – I don’t recall a day when the sambar powder, Idli molagai podi or dosa/idli batter was store bought. It was always made from scratch at home.. Infact, gramma makes enough to give my uncles and whoever else comes asking for some. [I dont know how to make these, but I do make fresh coriander seed/ jeera/pepper powder whenever am cooking]

Never taste while cooking – Oh yes, it is a cardinal rule in the house. We never taste till we sit to eat. Gramma says there is no need to taste if you eyeball whatever you add to the dish and know the flavours. She would say too much tamarind or chilli powder based on the aroma wafting from the kitchen and would be spot on. I cook this way, but do taste when am trying a new recipe where I feel there needs to be some tweaking..

Take your time, never rush- Yep! Always let things cook slowly, and never rush. When we made south indian style veggies- most are sauteed in a pan, and so they need to be cooked at the right heat level.. if you keep it on high, the veggies will burn and stick to the pain, too low, it would become mushy. When making upma, you need to roast the rava or semolina enough so that the final upma tastes good and doesnt stick to your mouth. Same applies for upma, sambar, other gravies..

Get creative, go off the charts – Remember I mentioned we try new recipes? Sometimes I will cook up pasta or some other dish just using the ingredients in the kitchen. At such times, I take liberty to mix and match spices or veggies even. Well, must say so far it has always come out tasting yumm and no casualties.  I love adding random spices, a bit of curd or milk and blitzing some of the gravy to give it extra volume if needed.

Never hesitate to use butter or ghee wherever needed – Gramma believes butter/ghee makes everything better. But she doesnt go overboard, so even when I make a dish she will add a tiny spoonful into it, mix well and then serve. It does enhance the taste and if the dish is spicy, tones the spice levels down.

Always cook plenty extra- This was something I took a while to wrap my head around. I am the kind who believes in cooking just enough. But gramma says there should always be enough food for 2 people [ what if someone lands home suddenly..?] Having married into a big family, she has always had extra mouths to feed or someone dropping in randomly. So, anyone who comes home [even today] will have a meal available.

Use the right kind of oil to accentuate flavours – Like I mentioned above, dishes with coconut needed coconut oil tempering, avial & olan- no tempering. All other dishes we use Gingely oil for tempering [ and for dosa as well], and to make appalam it is refined oil. Gramma says the oil makes a world of difference to the taste of the dish- we have all grown up eating this way and so we know instantly if a different oil has been used [ esp in traditional dishes]

Psst- did I mention most of the cooking  at home is NO onion NO garlic? Yep! Am quite comfortable cooking this way and don’t really miss those two ingredients much. Once in a while, I do make something for myself with garlic or onion raita… It is easy and fun to cook without these, not rocket science…

Well, what are some of the things you have learnt from your gramma? do share, would love to hear from you…