Experiment with foods – Noodles with veggies

Over the years, have learnt to play around with food- textures, flavours, build layers.. I know all this sounds like something you hear on a TV cookery show, but that’s how it is. Take any of the dishes made at home- be it the regular Dal, sambar, kari, or any kootu/sabzi.. It is always been about adding spices/condiments/veggies/meat, building flavours and finally bringing it all together as one cohesive dish.

The traditional combos at home

Similarly, many families [ including mine] have these certain set combinations they love –
Mixed rice/Pulao+raita/appalam,
Aappam+ coconut milk,
Adai+vennai+vellam,
Sevai+morkozhambu+appalam and so on…

Growing up I ate what mom cooked till I got to 10th/11th standard, subsequent to which my taste started changing. I no longer wanted regular tambrahm food, I wanted to experiment- I wanted bread upma or noodles or funky sandwiches. Though we were never a household that had bottles of sauces, or jams in the fridge, we always had enough veggies, and so I started cooking with them, mixing them up with sauces/spices and figure out what worked and what did not. This interest of mine has continued & over the years, I have begun experimenting a lot more.

I did not know of Pasta, pesto, sun-dried tomatoes or Subway[the brand and sandwich] till 2000. My grandparents came back from their USA trip and started sharing all the food-related stories- which included these and more. This added to the kitchen experiments… Initially, I worked with recipes shared by aunts and cousins, and then started doing my own based on intuition and a sense of what will work with what, plus there are now hoards of Food bloggers/ Instagrammers, YouTubers who are sharing recipes – some of which are lip-smacking, and others that leave me gobsmacked [ I love it, I want to try, but feel intimidated]

What has made this journey amazing is that gramma too loves trying new dishes, using ingredients we haven’t used or tried in variations. Over the last few years, I have tried numerous dishes, and during the lockdown too, that has continued.

Dinner in a jiffy

Last night for dinner, while the rest of the family had Idli, I knew I wanted something else, was bogged down with work, but knew what I had in the kitchen –
a packet of noodles [plain]
5-6 mushrooms
A cup of corn
1 Capsicum
1 Tomato
1 tsp Soya sauce,
2 Cheese slices
1tsp Chilli flakes,
1 tbsp olives
1 tbsp Thai green curry paste
Salt to taste
Milk ( I like to add milk to balance out the sharpness of the thai curry paste)

It took me about 10mins to get the prep done, and get cooking…

Here is what I did – The process
I cooked for 1 adult & 1 dog [who loves plain steamed noodles], adjust quantities depending on how many people you are feeding…

In a pan add some oil, chopped up garlic, and let it cook till garlic is taken to the edge, nearly burnt. I love that flavour. I also added half an onion that I had chopped up earlier for raita, then a tomato chopped up, and the 2 baby corn pieces left in the fridge.
To this, I added salt, chilli flakes and some dark soya sauce-err, the only kind I had [careful of salt cos soya sauce tends to be salty].
Chopped up the mushrooms, keeping it ready.
I also added 2 sachets of tomato ketchup [ saved up from some takeaway]

In another pot, to water & salt I added the packet of noodles letting it cook.
Once the noodles were cooked, I strained the water, adding 1/4 cup to the veggies along with the last of the Thai green curry paste..
Letting the veggies cook well in the broth, I then tossed in the noodles and let it soak up all the flavours..

ZOMG, it was yummilicious…. What is the last dish you cooked? Do share a pic or link… 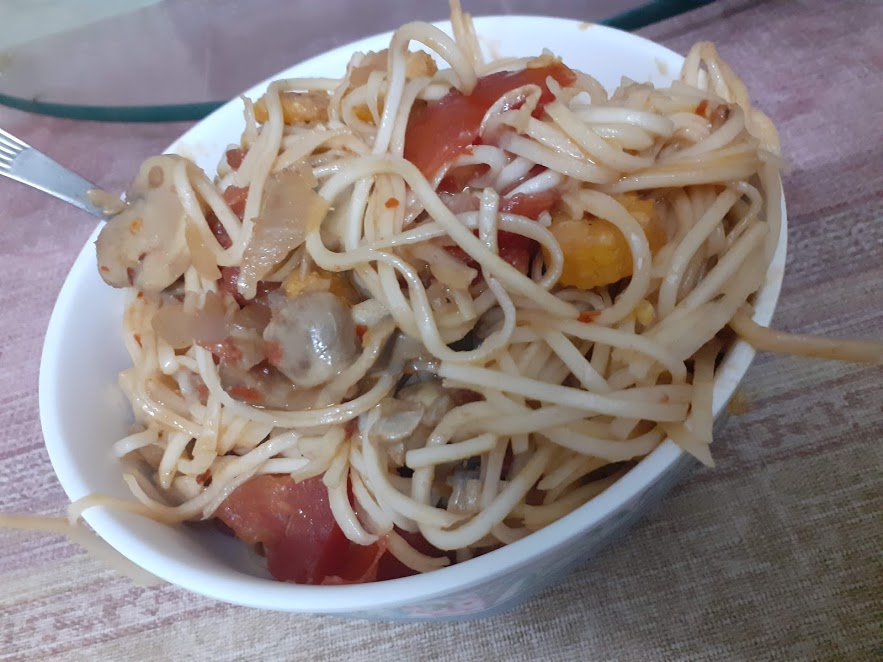