Dhamaal.. a barrel of laughs :)

Are you having a tiring day? stressed out? wanna scream or just shove it all?? well, here is the perfect medicine.. go watch Dhamaal.. i am not kidding you, no way sireeey… this a movie that will make you forget you had worries… you wil be laughing your brains out.. yep,literallly…. i havent laughed this much in a Longggggggggg longggggggg time…. absolute wacko no brainer movie….. 🙂 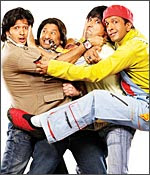 Dhamaal, as the name suggests, is a fun filled caper about four friends – Detective Roy as he calls himself (Riteish Deshmukh), who believes that he was born to be the best detective in the world; Manav (Javed Jafferey), who is adorable as an idiot , but is blissfully unaware about it and his older bro, Adi(Arshad Warsi), whose half baked knowledge about everything only adds to more fun ;and finally Mr. Scared of everything,esp his dad Boman (Aashish Chowdhury), who’s dad is Nari Contractor (Asrani)…….super duper troooop they are… 😀

These four lovable idiots live work together . Their idea of work?nma, they dont have corporate jobs… they are only into con jobs!;o) The thought of earning an honest living has never even crossed their minds. So one day while they get mistaken for being murderers and then are discovered to being innocent.. they come across a dying man, a man who talks n talks n talks some more making you wonder if he is ever gonna DIE… hehehe .. that is Bose (Prem Chopra), who gives them what they want… the route map to zilllion $$$$$$$ . He tells them about hidden millions as he takes his last breath.

Here begins their misfortunes! Police Inspector, Kabir Nayak (Sanjay Dutt) has been chasing Bose for the last ten years. He finally finds him. but, alas he is dead! Desperate for his promotion and seeing the 4 stooges he takes them in and tries to get them to spit out watever Boss might have told em…. more drama.. natak.. lying..hehehe.. cute stuff…

One misadventure follows after another. All five are thrown into hilarious life threatening situations that has us going crazy with laughter and guessing – Is there really any hidden money? Who will get it first? where is that BIG W????? loads of laughter,.. chaos…. mess ups.. goof ups… and finally we reached the end of the movie….

well,this was a bit of a damper, they could have ended it better… it got all serious, mushy mushy and ended in a good samaritan kinda note…. 🙂

But the movie sure is worth a watch… been talking abt it with all i see and recollecting some of the scenes and laughing over n over…. sometimes to myself ;o)