My Sassy Girl, A movie i had no clues of, and had bought couple of weeks back only because the cover looked interesting.. Little did i know that Bollywood was going to come out with their version of this, titled Ugly Aur pagli ….
Its one of those movies that has you smiling, laughing and gasping every now and then. A light romantic comedy where the lead actors are Gyeon-woo( cute simple looking (Korean pop singer Cha Tae-hyun, in his feature film debut) and ofcourse the vivacious, brash,sweet, genteel girl (who doesnt reallly have a name, but is ref to as Ji-hyun Jun, played by Gianna Jun)..
The movie has three parts… 1st one being the First Half… Second Half and then the Overtime!!
The story kicks off with college student Gyeon-woo crossing paths with a drunk girl in the train station. He then hoists her into the train, where she promptly pukes on a fellow passenger, and before passing out, the girl looks at Gyeon-woo and calls him ‘honey’. The other passengers assuming him to be the hapless girl’s boyfriend, demand that Gyeon-woo look after her and he takes off his shirt to clean up the passenger’s(on whom she threw up)shirt. After carrying her on his back for what seems to be miles, Gyeon-woo takes the girl where he meets destiny… he gets arrested and thrown into jail, where he gets a chance to rub shoulders wit a gang….  Here is where the movie begins, and all the fun unravels… 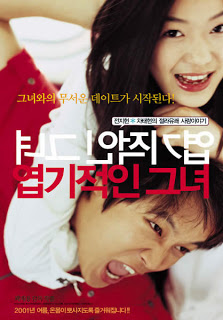 They meet quite often, coincidence at times, and others is when she calls him and orders him to get somewhere to meet her… She is brash, and a bully at it.. 🙂  When they dine out and Gyeon-woo orders anything but coffee, she barks her mantra “Do you wanna die?” and then promptly changes his order to coffee. When her feet begin aching from walking wearing heels her mom got her, she talks him to a point where he is forced to switch his comfortable running shoes into her high heels.
Since she likes to write, she subjects him to reading her scripts.. Each one with a twist, but one commonn thread being the girl is from the future..[ In one of the funniest scenes, Gyeon-woo gives her screenplays to a film producer, who winds up getting ill, throwing up minutes after reading it… ] 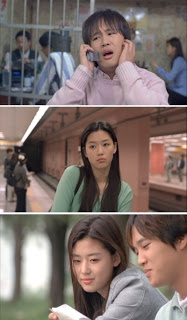 .. Inspite of her constant whacks and thwacks, Gyeon-woo finds himself hopelessly hooked on this ‘sassy girl’. And though the girl seems to relish in humiliating and belittling those around her, it becomes clear that underneath the brash exterior is a wounded soul who holds a genuine affection for Gyeon-woo. She is going through a heart break so deep, she finds herself confused unable to decide….
Their relationship continues in this manner for quite some time, and they are more like friends, except they arent really just friends…. The meetings with her family where her dad drinks a few shot and then Thud, falls on the table… Gyeon woo’s mom beating him with whatever she has in her hands, are some of the wacko scenes in the movie….
Towards the last part of the movie, it takes a U turn, adding a bit of twist to the plot… What happens to their relationship… how far do they go or not.. and what is her story are told beautifully… the scenes touch us so deep, that we become one with the characters…
The final scene takes the cake!!!! [noway, i aint given it out…]
Watch it to enjoy it!! the movie runs for nearly 2hrs, which is a rare thing for any movie apart from our Indian ones!!!
Oh and watch this clip… one of the beautiful scenes in the movie… couldnt resist…. 🙂
http://www.youtube.com/watch?v=nRNgGWpzmp4