Calm and serene all around.. nothing but silence greets you as walk along the stone path..
Not a word uttered, only thing on our minds was “what’s in store for us ?”

This is how mesmerising – Dhyanalingam,about 30kms from Coimbatore.. Set amidst the wilderness, this is a Isha Yoga centre at the foothills of the Velliangiri mountains.
Dhyana, in Sanskrit, essentially means meditation, and Linga means, the form!!
Call it a religious place of worship, or just a place where one finds peace,  Dhyanalingam, and the palatial Spanda hall [spanning 64,000 square feet] has magical powers!! During our trip to Coimbatore nearly a decade ago, we had the pleasure of making this journey!! The entire family i remember piled into two cars and we drove down in search of this elusive spot.. The sight that greeted us from the car park looked nothing spectacular, all we could see was a huge stone building with a gigantic dome fitted with a small shiv linga on top.
As we walked towards the main building, we came across this large beam- “Sarva Dharma Sthamba”- bearing the signs of “Aum”, the ” Crescent” and the “Cross” and others belonging to Zoroastrianism, Judaism, Buddhism, and Shinto signifying that the meditation center is beyond all religions, faiths & beliefs! On the other side are representations of the 7 chakras in our body.. 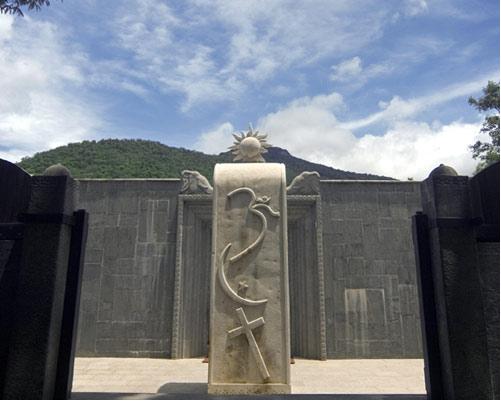 Walking along the stone path, we had to go up a small flight of stairs to encounter a corridor with stone scultpures on either side- each one depicting different stages in a Sage/sadhu’s life.. The last one is that of the great Yoga teacher — Pathanjali, the renowned author of Yoga Sutras. We were told that the snake covering his head represents the raising of energies through the seven chakras, which is the main objective of meditation and yoga.

If one was to look at the architecture across ancient temples, importance is given to the house of the main Deity only, with a bit of importance to the walkway around the shrine. Whereas, here, the energies of the Dhyanalinga have been consecrated to last for more than 5000 years without any dissipation, which is why one can feel the energy rush as they step into the campus.!! The elliptical dome housing the Dhyanalinga is 76 feet in diameter and 33 feet high. It was built without the use of any cement, concrete or steel but with brick and mud mortar stabilized with lime, sand, alum and herbal additives. It’s the only structure of its kind in the world!! 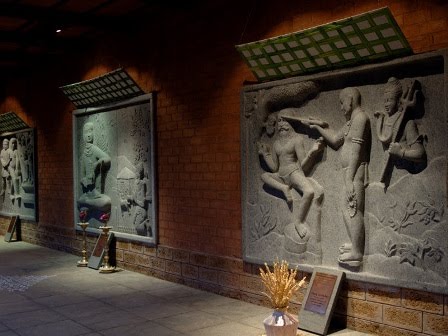 The temple has a cave like structure, the mouth being a seven-headed snake made out of a single stone. The garbhagriha/walkway is circular in its shape. In the center sits the Dhyanalinga , at 13′ 9″, said to be the largest mercury based live linga in the world. Upon looking intently you see the seven copper rings denoting the seven chakras of a human being.

The linga rests on a coiled snake with seven layers called Avudaiyar..Surrounding the magestic lingam are twenty-eight energy cubicles called ‘aura cells’ made of brick, looking like little cubicles. They are meant for meditation 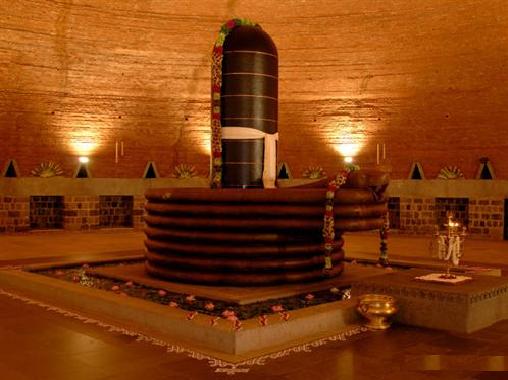 After a bit of hesitation, i remember each of us climbed into one, and sat in absolute silence for a few minutes. The kind of power, energy you feel cannot be put in words, but has to be experienced..

Hmmm, i think i wanna go visit here once more!!!

All pics are from postcards we had picked up at the center and google!! Photography is prohibited around the venue!!
Contact:
Isha Yoga Center Contact Details
Isha Yoga Center,
Velliangiri Foothills,
Semmedu (P.O.),
Coimbatore 641 114, India
Telephone 091-422-2515345
Email: info@ishafoundation.org
Furthur information can be got on www.ishafoundatio.org and www.dhyanalinga.org