While looking for a new restaurant to try, we remembered Kirky’s and made our way to the restaurant. There is a small boutique of sorts on the ground floor and the restaurant is tucked away in the 1st Floor. As you walk in through the Black glass door, the interiors immediately draw your attention. The black light fittings, white and black patterned wallpaper, and the funky tables and chairs are quite appealing. We were shown to a table near the entrance. Black table with 2 black chairs and 2 yellow chairs was the setting! 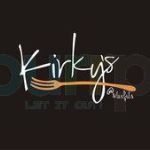 There was a huge Burrp certifcate on the wall stating that Kirky’s was renowned for their Desserts!

The menu was also quite extensive and quite tempting. Between the 2 of us we ordered Onion Rings and Chicken Wings.. The onion rings were ok, not as crisp as elsewhere, and friend said the Chicken was avg tasting. She said she could taste a bit of chinese sauce in it. Since it was a hot day, we ordered 2 watermelon juices, and what we were served were 2 watermelon+mint+lemon juices, which did not go down well with us. The waiter said that is the watermelon juice they served! oh well..

Moving on, we ordered Mulgitwany soup, which took over 20mins to arrive, and when it did, we were wondering what we had ordered. The soup was diluted Tomato sauce, with oodles of chinese flavours, pepper and almost raw veggies..

Braced ourselves for the main course and decided to play it safe by ordering Vegetable Augratin and Pasta arabiatta, thinking they cant go wrong in these.. Phew, the dishes looked good,, but thats it… The pasta had roughly ground sauce[that tasted very indian, almost like biryani masala had been ground with tomatoes and Italian herbs] sitting limp on top of the penne pasta.

Dint want to venture any further and decided to end our meal there.

I have seen this in many restuarants- the waiters have no clues about the dishes, or what the specialties of the resto are. Wish the restaurants took time to educate their staff..