After reading the “Maximum City” by Suketu Mehta, “Love and Longing in Bombay” by Vikram Chandra and ofcourse  “Shantaram” by Gregory David Roberts, I was now onto reading yet another book on the Buzzing city of Mumbai- “Saraswati Park” by Anjali Joseph.

This book has been nominated for the Vodafone-Crossword Award for 2011 under Fiction category! 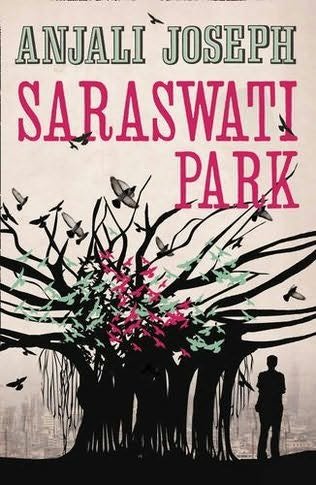 Saraswati Park is a fascinating story about a simple family who call Bombay their home. The book is a vivid   description of the city and how many lives are entwined within it..
Saraswati Park is the colony where the protagonists- Mohan &amp; his wife Lakshmi reside. It is where Mohan wakes up every morning and makes tea for himself and his wife without making too much noise, though no matter what lakshmi wakes up and complains of all the clanging 🙂
Saraswati Park is where Ashish goes through a transformation.

Saraswati Park is the place that is the hub of emotions, personalities and a reflection of the city that is alive through the day.
Saraswati Park is like the train journey to Churchgate….the moments where one fights to find a seat.. while other times the train offers solace …
Saraswati Park is a book that is Mohan’s story. Mohan Karekar is a letter writer who helps translate others thoughts into words day in and out, sitting outside the post office. He loves to read, aspires to write a book one day and is very concerned about the changes happening around him.


Lakshmi got up when he opened the cupboard to take out a clean shirt. ‘Every day,’ she observed. She picked up the covered cup of tea and regarded it at arm’s length. She sighed. Mohan began to do up his buttons. The shirt was crisp; it hung at a polite distance from his body. He started to roll up his sleeves, and followed her to the kitchen to point out, ‘But I didn’t wake you.’ She poured the tea into the saucepan and lit the gas. Her eyes were still heavy. ‘That’s what you think,’ she said. ‘You think I don’t hear you, clanging about in the kitchen.’

Mohan and Lakshmi lead a very simple and almost staid life, what with their children being away from home and his job being a monotonous one.  Though everything looks happy and dandy, there is a lot brewing underneath, that causes quite a bit of tension between the couple, and it is visible their marriage is crumbling like the words that are stuck in Mohan’s mind.

A group of pigeons flew out of the old tree and into the sky, their wings making the sound of wind on the sea; they criss-crossed each other and made for the west. He tucked the new book under his arm and returned to the station, where a Harbour Line train was pulling into platform two.

Things do change a bit when Ashish, Mohan’s nephew comes to live with them and hopefully turn his life around, especially studies. Ashish is a 19year old teenager majoring in English literature and going through a confused phase, primarily related to his sexual preferences.
Saraswati Park, the book takes us along the journey that these three different characters go through, giving us a glimpse of what each of their lives are like and what is it that holds them together, or not.
The crux of the book is when Lakshmi’s brother Satish passes away, and Mohan is left to take care of organising the last rites, to being there when the will is executed. Satish leaves all his posessions to Ashish, who is not a blood relative but someone he cares about.  With each passing day Mohan immerses himself in the books and writing, almost ignoring Lakshmi and her desiers. Using this as an excuse, Lakshmi goes away to her hometown, leaving Mohan wondering if she is alright and if he has done something to upset her.
After a brief spell of seperation, Mohan finally gives in and goes to bring Lakshmi back where she belongs. All the while Ashish is going through his own set of worries and turmoils, not to forget Professor Narayan who is tutoring him not just in English Literature but on life as well. He is torn between feelings for the Professor, which ends up in heart break when his professor ends all ties with him.  Thanks to his friend, Ashish matures and moves on, going to USA for further studies, trying to put the professor episode behind him, albeit with one final phone call while waiting for his flight to board.

Anjali has managed to keep the flow going beautifully, giving us readers something to ponder on with every page.  Though the pace of the book is slow and some parts seem lame, it is overall a good read.  For people who have been to or lived in Mumbai, the spirit of the city will definitely have them smiling and reminiscing.

Good luck on the award, Anjali!!