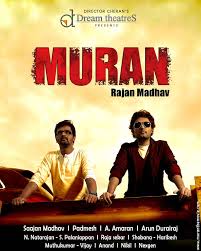 Genre: Thriller
Directed by:  Rajan Madhav
Cast:  Cheran, Prasanna, Jayaprakash, Nikitha, Hari Priya, Suma
The story is fairly simple: it is about these 2 guys, who are poles apart in terms of their personalities and how fate brings them together, leaving one of them no choice but to follow suit… The 2 men are Nandha [Cheran] and Arjun[Prasanna]

The movie opens with Cheran and some others sitting in a table having a
drink while Prasanna is standing on the ledge asking a waiter to count
to 3 so he can jump down and hopefully fall into the Swimming pool.. he
is piss drunk and not in his senses, but hell bent on doing this
feat…

And the following day it so happens that Arjun gives Nandha a ride to Chennai when his car breaks down [no thanks to a bunch of drunk driving rash on the highway].. With time, they start sharing their life stories… As the flashback unfolds, Nandha passionate about music, plays the guitar talks about being married to  Indhu (Nikitha) who hates music, wont give him a divorce till she gets her hands on her father’s possessions and is possibly having an extramarital affair. Nandha is vexed with his marriage, but then he smiles once again when he meets Lavanya (Hari Priya) with whom he develops a strong bond and possibly even love.

On the other hand, there is Arjun, son of a millionaire and, all he wants to do is party and blow money [kinda like Ranbir in Wake up Sid]. He talks about how his father Devarajan (Jayaprakash) has ruined his life, the love he had for Linda [who worked in his dad’s office and who was forced to have sex with his dad during an official trip and thtereon committed suicide].. Arjun talks about how Nandha can move on with Lavanya if his wife was taken out of the equation and how his life would be better when his dad is removed from the picture. 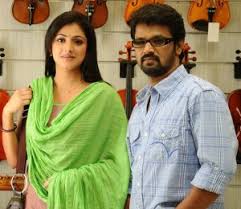 Arjun loves Thrills, while Nandha is a “play it safe” kinda guy. But Nandha realises Arjun is serious about this plan of his… But then, he walks away giving Arjun the number of a leading psychiatrist to seek out!!
This is where the movie takes quite a turn and twist…. One day, as Nandha goes about his routine he receives a call that his wife met with an accident and has died.. He is stumped and shocked.. That evening, he receives a surprise visitor… no prizes for guessing.. it is Arjun who comes to say “no need for Thank you” 🙂
It is then that we feel chills down our spine, wondering what is Arjun really capable of! Arjun has actually put his words into action, proving he was serious and that he now expects Nandha to do the 2nd part of the deal- kill Devaraj…. Nandha does try, but fails and then calls it quits!
And as days go by…. he comes to know what Arjun is capable of , the extreme he goes to which leaves Nandha with no choice but to follow suit and go kill Devaraj based on the plan laid down by Arjun… What happens next is the grand climax and finale… let me not spoil it for you….

A friend mentioned that the movie was inspired by Hitchcock’s film, Strangers on a Train (1951).. Now since i have not seen this, i quite enjoyed it and felt the movie had a very Hollywoodish touch to it, the sleek neat way of execution, with each scene flowing smooth…

Its a movie that will have you glued to your seats, wondering what next.. who will kill whom… if Nandha or Arjun will get caught….
The songs are ok, i dont really remember any of them…
Plot is good, the pace is maintained through the movie…
Cheran and Prasanna have done an amazing job, doing justice to their roles to the dot.. Prasanna as a bad guy is quite a feat, it suits him!!