Vaagai Sooda Vaa- Its all about Learning! 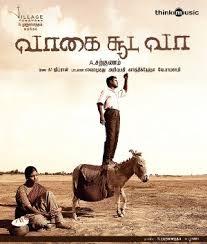 After watching Kalavani and enjoying it, i knew i wanted to watch Vaagai Sooda Vaa… Vimal and Sargunam seems to be a good combo…

As the screen came to life and the movie began, it was obvious this was a movie set in the 1960s or 70s…  Bhagyaraj is seen making a promise to his wife that he will get his son a Job with the Government office, that of a teacher atleast and have the family name held high among his clan….

While waiting for the Government job to fall in place, Veluthambi[Vimal] joins the  Grama seva and aims at spreading the value and importance of education. He is sent on an assignment to the desolate village called Kandeduthankaadu near Tanjore. Though he is reluctant, his father[Bhagyaraj] urges him to take it up atleast to gain experience as they cannot afford the 100Gms of Gold asked as bribe for the Government job.  He lands in this village that is filled with families who are into Brick making.

He is offered the shack that was used to store the goat, much to the chagrin of the man in charge of the goats[ few scenes where the goat is sent to chase him around are so howlarious]…Anyways, back to the story, he then seeks out Madhi[Iniya] to offer him meals daily [she is quite the cheeky one, gives him pot of ragi porridge with green chillies and when he goes complaining to the women of the village, sneaks in and replaces chillies with some meat only to take them away again as soon as the women leave]… Madhi falls in love with him, dreaming of their life together….

With time, he realises the kids in the village would rather play around or go work in the Brick stacking unit than come study.. he tries to lure them by offering to tell stories, but he is unable to come up with an interesting story….

And in between all this, there is one man [Elango], who looks insane , walking around chanting “i hear birds, i hear them all around me” living near the entrance of the village.. One night he comes to visit  Velu telling him “you should not go, i shall leave” and the next morning passes away…

There are powerful enemies lurking about… The local bigwig JP (Ponvannan) who treats the villagers like slaves and demands they repay him if they say a word against him… and the last thing he wants is for them to learn and become educated. It is only when Velu puts out a challenge to the villagers on the number of bricks laid out that the villagers understand how they are being conned and the women instantly agree to send their children to study…

The arrogant owner (Ponvannan) now locks horns with Velu, sending out his goons to kick Velu out of the village. but he is saved by the gang that opposes Ponvannan, the man who redeems the villages of their dues as well.
Meanwhile, Velu gets a letter that the Government job has come through and gets set to leave the village… As he is bidding goodbye, he tells the kids who have by now become attached to him that he will be back soon… One kid, comes upto him shows a slate with his mother’s name written on it [albeit with a tiny error] and then drops some coins into his hand and tells him to bring back a notebook to write in… This tugs at Velu’s heart and he goes to the bus stand and tells his father he cant leave this village now… Not when they are ready to learn…
Alas, he returns to the goat shack only to be told by the village medicine man that a letter came for velu, which he read that said the Grama Seva is unable to pay him what was promised and that he should pack up and leave….
Having given up the Government job and with no pay from Grama Seva, Velu continues to teach the children of the village… The beautiful turn of events is when the villagers come together and payhim from their petty earnings.

The movie has quite a few touching scenes and moments…It has been set in a village that is in the middle of nowhere and is completely barren…. It is a slow movie, but gains momentum in the 2nd half… I enjoyed the movie immensely…  Do watch it!