There is Eddie Murphy… Wait, there is Adam Sandler… Oh, hold it there, there is Alan Alda too.. Now, a movie with such fine actors has to be fun filled right? Well, that is what i thought before sitting down to watch Tower Heist...  What i ended up thinking towards the end.. well, read on…
The movie opens with Arthur Shaw [Alan Alda] who plays chess daily with Josh [Ben Stiller] and who promises to help triple the pension money of all the staff at the Tower apartments faking a kidnapping, which is when his true colours are unveiled. 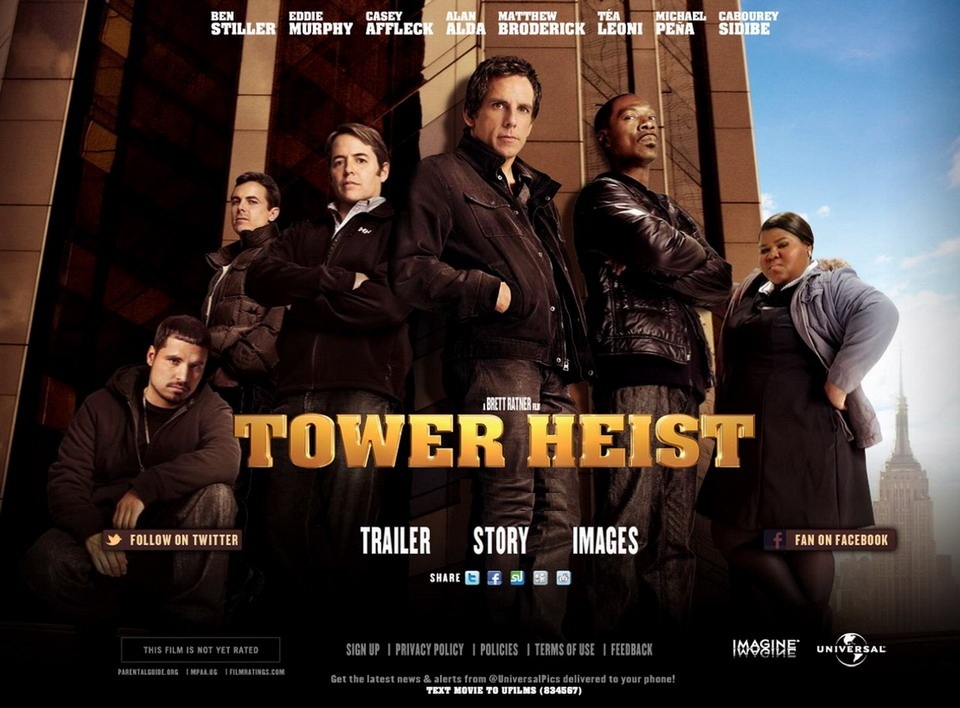 Apparently, he was faking a kidnapping to flee the country to escape from all the frauds and federal charges. Josh and others feel it is a mistake, but soon realise it is indeed True and that Shaw has made all their money vanish into thin air…

Since all the Tower employees are good hard working souls and they trusted Josh with their pension, it is now Josh’s turn under the spotlight where he is made to feel guilty for trusting Shaw with the money… When Shaw is put under house arrest, Josh along with  the new elevator operator Enrique Dev’Reaux  and Charlie, the concierge with a very pregnant wife march into Shaw’s apartment under the pretext of making breakfast enquiries and bash up the Ferrari he has parked in his apartment that he claims belonged to Steve McQueen… The trio are fired and banned…

That night while getting drunk with FBI agent Claire [Tea Leoni] that he gets an idea on how to set up a Heist and get back the money Shaw stole from them… he puts together his Oceans Team, oops heist team – Enrique, Charlie, Mr. Fitzhugh [Mathew Brodrick who seems to have aged and looks
200],ex-wall street guy who has just been evicted from his Tower
apartment,Slide [Eddie murphy], his next door neighbour who is forever getting into trouble and decide to break into Shaw’s apartment and hunt down the Safe where he feels the money is tucked away….
As the movie rolls, we get such strong traces of Oceans 11 that it is hard to focus on Tower heist…. The plan, the tricks, the little twists and turns are all good, and well chalked out which keeps us in the edge of our seats, sometimes rolling with laughter and other times wondering will they pull it off… Pretty soon we discover the other characters who are part of this plan… Lester, the adorable doorman and the spunky lock picking “i want to get married to retain my visa” Odessafrom Jamaica….
The scene where Eddie Murphy orders them each to shoplift an item worth $50 is howlarious….
For some strange reason, i was also reminded of Ben Stiller in Night at the museum while watching this… probably his style of acting or delivering dialogues….
This is a movie you will enjoy while you are watching it,  you just might not remember it too long, or go around recommending your friends watch it… but what the heck.. value for money 🙂