So, i saw this “Cake Buffet at The French Loaf” ad in today’s Hindu.. I wondered how much dessert can one eat? Even though it is unlimited, even though the buffet is only Rs249, how many cakes or muffins or tarts can one plough through? Before i was done wondering, i heard my phone ring.. It was from Burrp and they were asking me if it was possible to go check out a preview of this event? Whoa, did they read my mind? I replied “Yes”.. Within few minutes, the PR person called and informed me that i could visit The French Loaf in Harrington Road between 2-4pm…. That was it! I remember how few years ago, this was a new cafe in our area and today, there are over a dozen outlets across the city.. wow! I walked into French loaf around 3pm, met with the PR team who spoke about the event, and how the whole concept was the 1st in South India and it sure was creating quite the buzz among foodies in the city… French Loaf had recently created a record by creating the longest cake as a “tribute to 75years of Tamil Cinema”. It was displayed at Express Avenue.. Infact, if you were to ask me, it was French Loaf who revolutionized the whole Cakes should look much more appealing,”lets bring on the excitement and drool factor on 1st look concept!”
There i was at a place so familiar and yet i dint know what to expect when a man in white and white hopped over, introducing himself as the Chef- Bhupesh .. He shared with us the birth of this Dessert Buffet and the different treats that were in store for those who landed at French Loaf on 10th December between 4 and 10pm.. It was an Unlimited Dessert Buffet where we hope to introduce people to different kinds of desserts, beyond cakes, show them tarts, cheese cakes, pies, profiteroles, truffles, mousse, rum balls and some more
There were more than a handful Eggless desserts i noted [ the silent voice within my head jumped in joy thinking of my family, some of whom were particular about eggless]…
The 1st cake that was brought out of the kitchen was a beautiful turqoise coloured Fish, with blue scales & brown fins.. it looked divine!! It was a Black forest cake but all i kept thinking was “i could never cut such a beautiful creation, leave alone devour it..  “ And then came this burst of red on a bed of white cloud, it was Strawberry Cheese cake, covered with fresh Strawberries… Ooh, yummm… 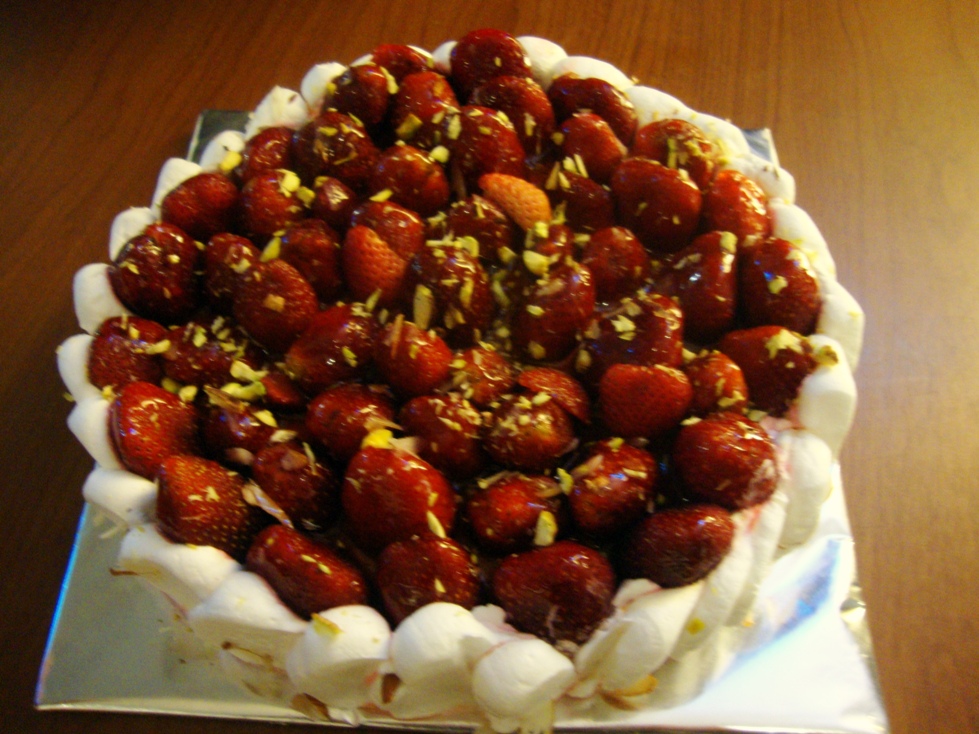 The grand finale was a cake that looked like it belonged in the garden, a simple cake with a beautiful decoration on the top, made completely with white chocolate. It was fascinated to see the wrinkles, folds that made the chocolate look like a sheet of fabric… 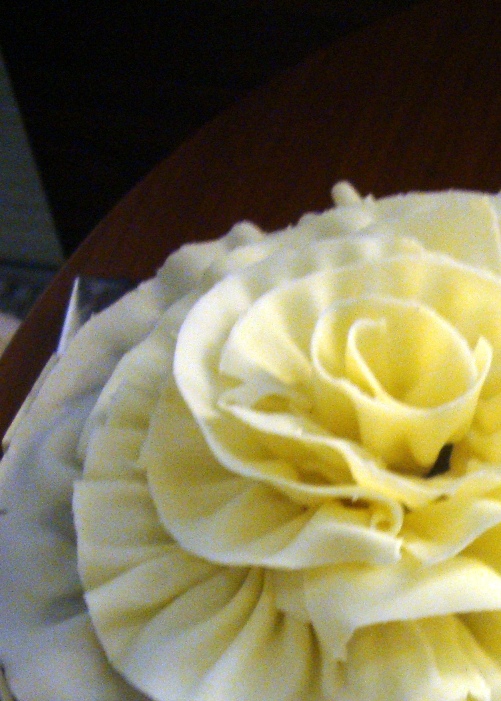 There was also a Chess board cake on display, which will make its way to the buffet, but i couldnt take a shot of it, maybe when i go on Saturday i will share how the complete spread was, provided i can contain the excitment and flavours!! 🙂
Oh, forgot to mention the wide array of  delicious cakes that made it to our table for us to relish… There was a Blueberry cake with barbie photo on it that tasted divine, a strawberry cream cake, Black forest, Chocolate Truffle and the fresh pineapple cake…  What a treat for the eyes and soul they were!!
So, if you are in Chennai and have a Sweet tooth, head over to The French Loaf on 10th December… The buffet will be sitting waiting for you in Le Chocolatier lounge [1st floor, above French loaf, which also belongs to the same Oriental Cuisines Group]...

Update:
A collage of cakes and treats that was up for grabs on the day of the Buffet….