Last week i received a tweet followed by an email from Sahil to be a part of the Pepsi T20 Football that was going to happen in Chennai at Express Avenue… The mail had me curious, but alas, Saturday i was tied up and Sunday was also pretty chaotic.. Towards evening, a friend had made movie plans and i thought “why not check out the football event after the movie, if only to see what it was about”

Pepsi  had recently announced the launch of its first ever football themed
campaign in India with a new ad film featuring Ranbir Kapoor. The brand has taken the campaign forward with football in new format – “Pepsi T20
Football”.
Few days earlier i had visited EA and noticed the mini court that was being set up in the atrium [center] and it looked quite swanky, Pepsi colours – Bue & Red with goal posts and the works… Sunday when i walked into the mall, it was buzzing with people and action. There were crowds along every aisle, near the escalators and just about everywhere. It was amazing to watch so many people tuned in and excited about a sport that i dint know much about.
Football to me has always been one of those other sports that some of my friends were crazy about. I knew the terms, knew the rules, just never really watched an entire game like i would Tennis or other fav sports.. 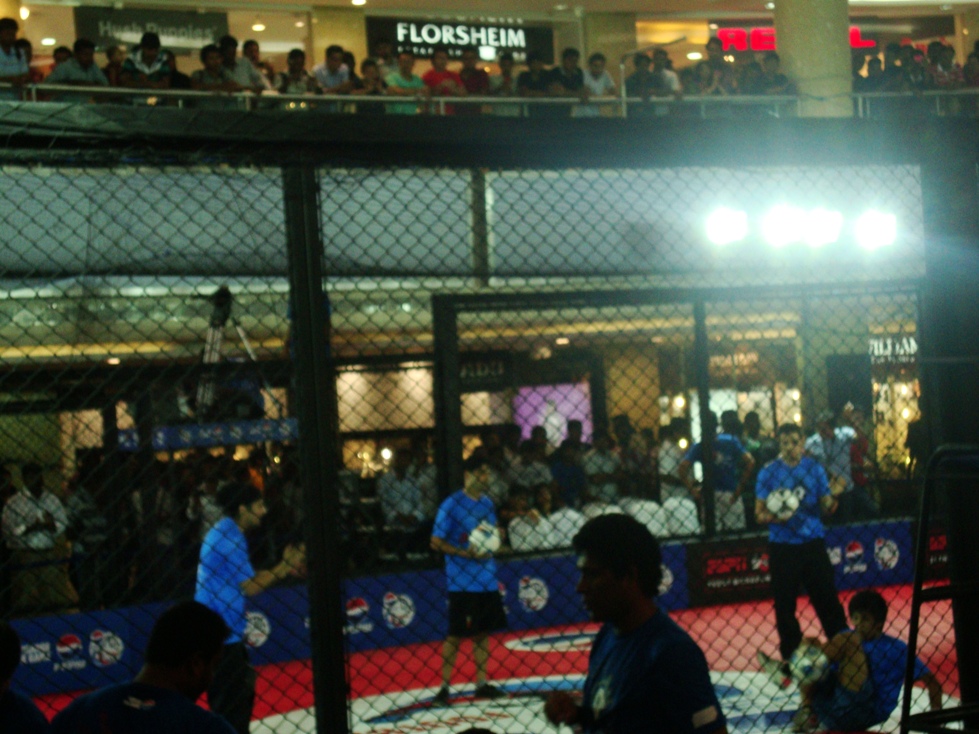 The matches were all less than half hour, and action packed. I couldn’t stop watching the players and the game as i made my way down the escalator towards the atrium. It was quite fun, i must admit! This new format makes it shorter , which means more games are played and for people like me who wasn’t really into it, this was an opportunity to watch the sport up close and learn more. 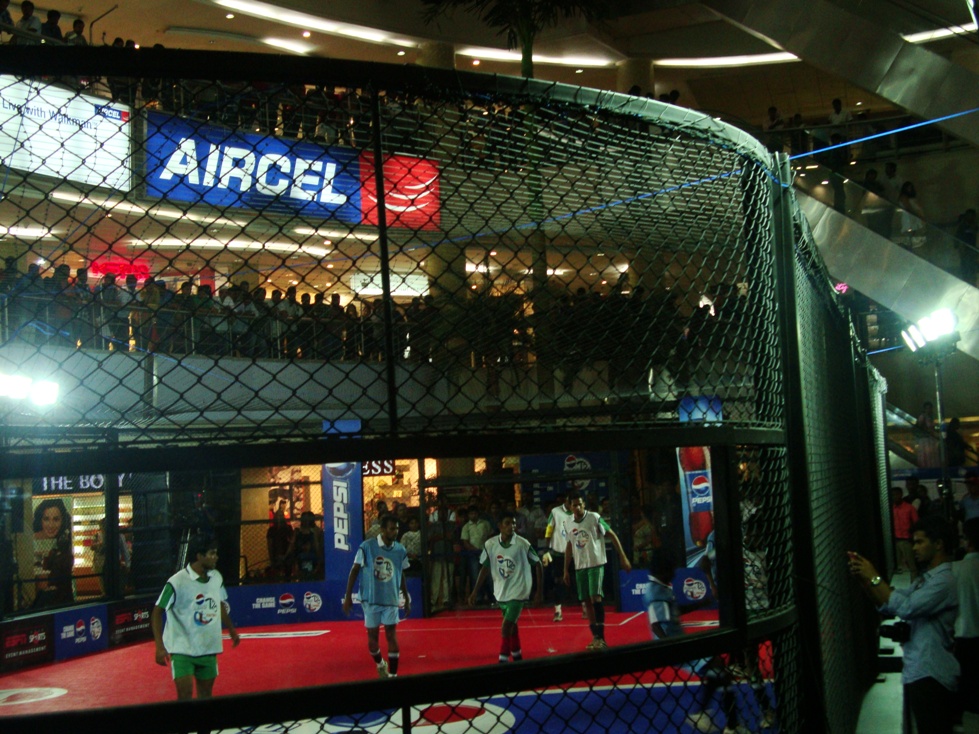 The yellow card, the penalty shots, and quick movements were quite an adrenalin kick. In between matches, 4 guys in blue jersey and black shorts entered the net and performed few acrobat stunts, some amazing moves… Wondered if their bodies were made of jello.

Also managed to meet few other familiar faces, some who were part of the tweetarati gang who’d been contacted by Pepsi.We shared our experience through tweets with the “#pepsiT20football” hashtag.. And also saw them pop up on the giant TV screen placed at the venue… 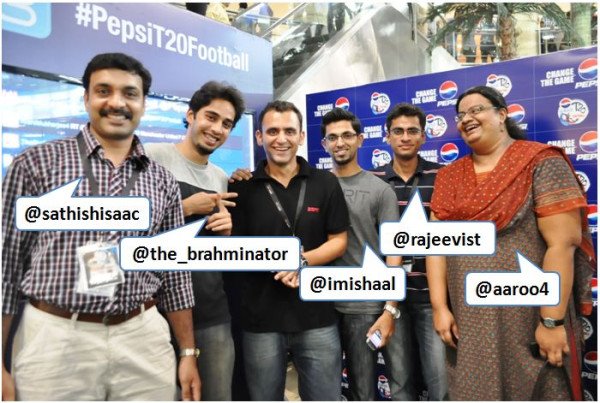 Not only were we part of the action, but were invited to give a brief interview to ESPN about the campaign..  A
2min under the limelight where i got to share my views to Jatin
Sapru… I was the only girl on the stage and well, proud moment
indeed….
Felt pride that Chennai was the 1st city to host this campaign.. They are going to 6 other places, this weekend in Bangalore… 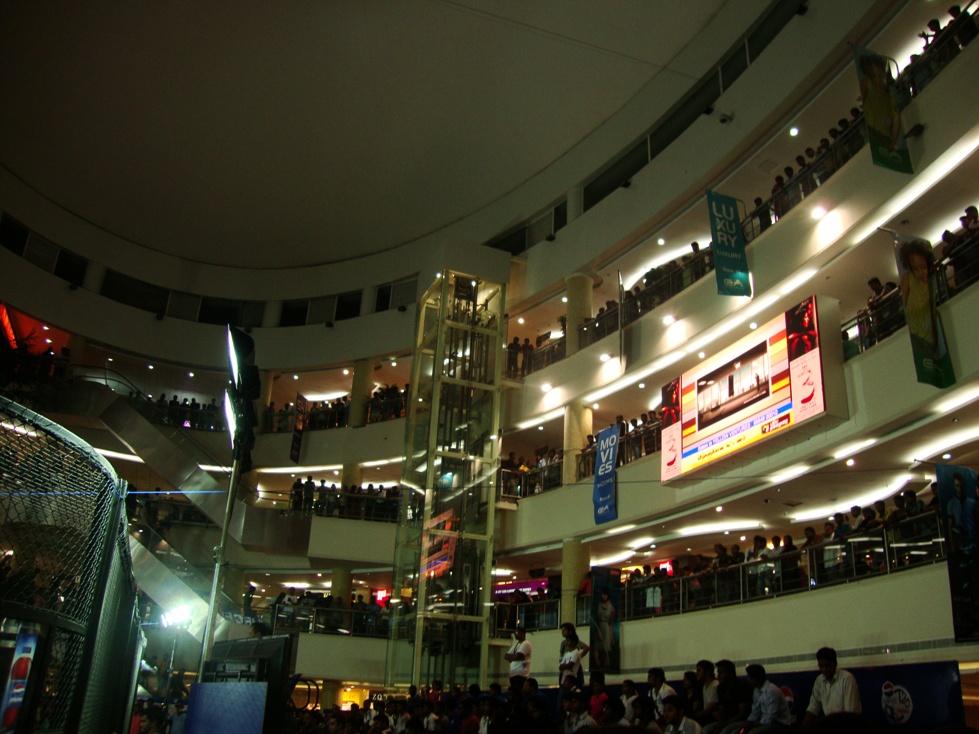 [Right A glimpse of the crowds across the floors at EA..
About the Pepsi T20 Football Campaign “Change the game”

The below excerpt is from IndianTelevision.com
Pepsi T20 Football is a new format for amateurs, which combines T20 style of playing with the spirit of football. Winners of this nationwide tournament will get a chance to play football the Pepsi T20 way against the Indian cricket stars and get an opportunity to be coached by an international football star.

To be a part of the Pepsi T20 Football campaign, amateur footballers between the age of 14 and 30 years can register in 7-member teams at designated venues. Open to all Indians, on ground registrations and matches will be organized across major Indian cities including Chennai, Bengaluru, Kolkata, Mumbai, Lucknow, Ludhiana and Delhi. The registration process begins with Chennai on 14th March and tournament will continue till June. 64 teams from each city will compete in knock-out style 20-minute matches and the top 32 will compete in the respective city finales. The city finale will be organized in a unique metallic cage at a public venue with lots of music, fun and Pepsi. A total of 8 teams, including 1 winning team from each city and 1 wild card entry will compete to emerge as ‘Game Changers’. They will then get the opportunity to be coached by an international football star before they face the Cricket Stars at the Grand Finale.