I
was just beginning to understand what made Goa so rich in history and
culture. It was my 3rd day and i waited outside the resort for the tour
bus. I knew we were going to visit a few churches and temples, apart
from beaches that day. The one temple that i had read about was part of
the itinerary. The Shanta Durga Temple.
The
day was mighty hot and i lost count of the number of bottles of water i
had gulped down. But when the bus pulled up into the parking lot, i was
the first one out and off.

Situated at about 33 kms from Panajim, The Shantadurga temple is home to the Goddess Durga. She is said to have mediated between Lord Vishnu and Lord Shiva during their raging fight. So, in this temple she is flanked on either side by the two Gods. It was quite a walk from the parking lot to the temple, and again another short one from the entrance to the main temple premises. 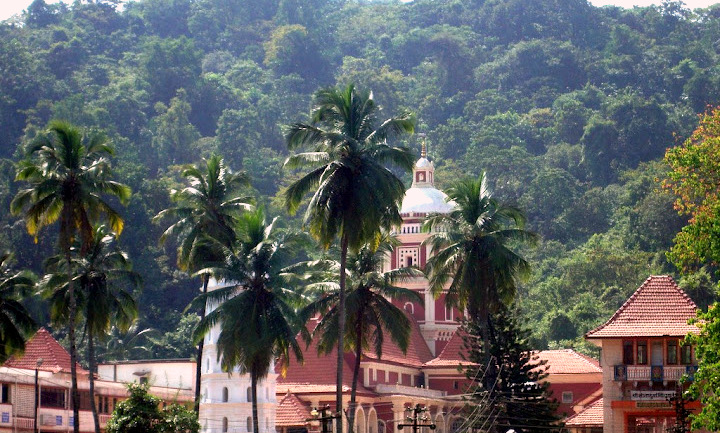 The Shanta Durga temple as seen from the parking lot
Walking barefoot, i literally trotted trying to manage the heat under my foot and the sun blazing from the sky. There was a tall tower of sorts near the main building, which is a structure i heard was common in temples in Goa [the other famous temple Sri Mangeshi Temple also bears a similar structure]. 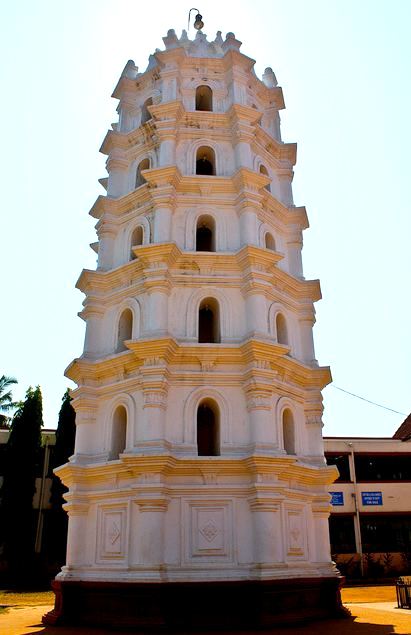 The majestic 6 storeyed Deepasthamba
A
man who was sitting along one of the walls saw me and took it upon
himself to tell me a bit about the temple. The temple was built during
the reign of
Maratha ruler – Shahu Raja of Satara, who had received a request of the
Naro Ram Mantri, in 1738 A.D. The shivalinga here at the temple is said
to belong to the Mahajans [the community with the surname ‘Vorde’ who
are the
Kulavis]. He went on to say the temple is also called Shanteri
Temple.
The main deity in the sanctum was Goddess Shanta
Durga holding 2 serpents, one in each hand
[representing Vishnu and Shiva]. The original place of Shantadurga devi was at Keloshi.
However, during the
Portuguese inquisition of Goa, the temple was destroyed forcing
the trustees of the Shanta Durga temple to take a decision to shift the
main idol to Atrunja taluka for safety. 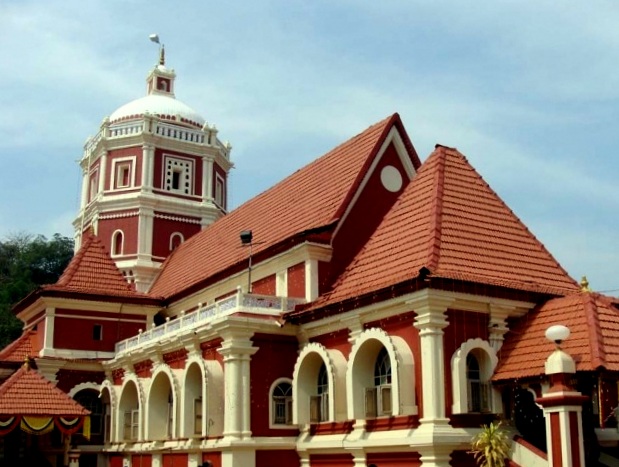 The main temple building
The tower i mentioned near the entrance is the 6 storeyed Deepasthambha
and a Ratha (chariot), which is found in all
temples across Goa.  The temple also has a dome, which is fairly unique
for Hindu Temples.  This is one of the few temples where Harijans are
permitted to enter the main sanctum sanctorum.  I suddenly heard someone
call out my name and realised it was time to head back to the bus. I
walked down the slope towards the parking lot watching hundreds of
tourists and locals march up the slope chattering away. 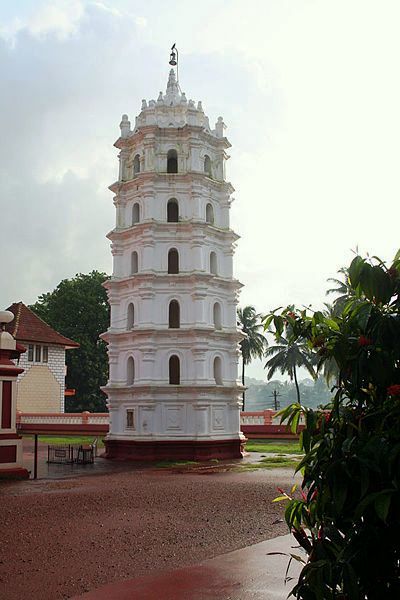 A different view of the Deepasthamba