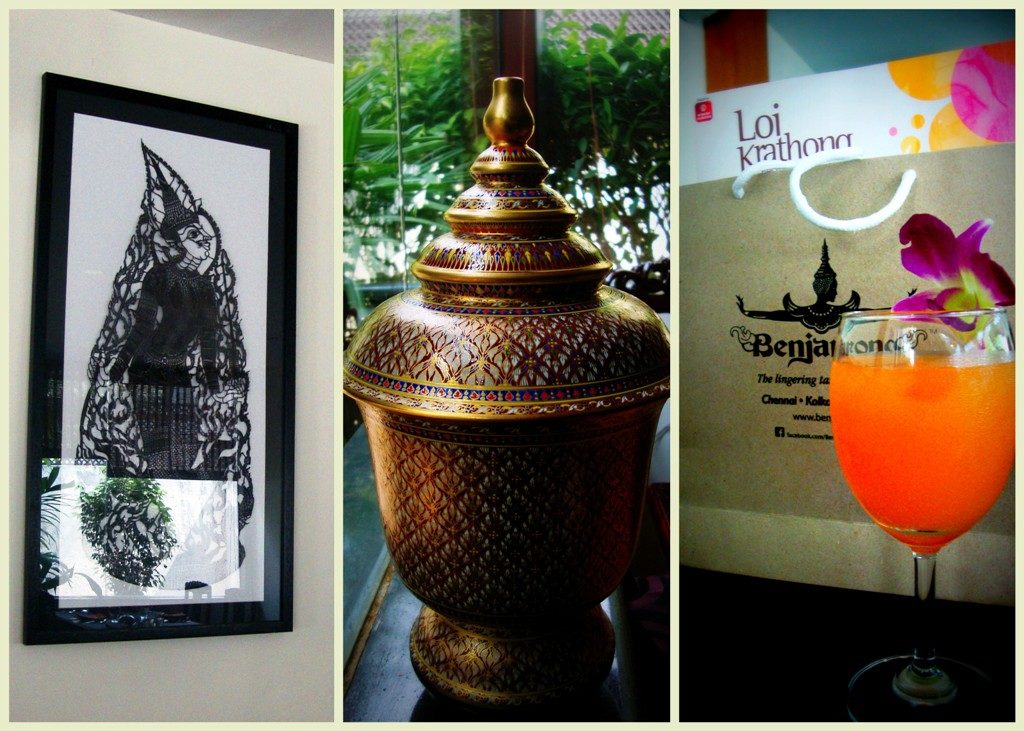 Coinciding with our Karthigai deepam was Loi Krathong, the festival of lights for those in South East Asia, primarily Thailand. And in lieu of this festival, Benjarong is hosting the Loi Krathong Festival.

An elaborate spread reflecting the true flavours from those regions and showcasing some of the interesting ingredients they use in the cooking. A journey that began with a beautiful deep violet orchid flower all the way to the Lemongrass ice cream, it was quite a treat, for the eyes, stomach and the soul. 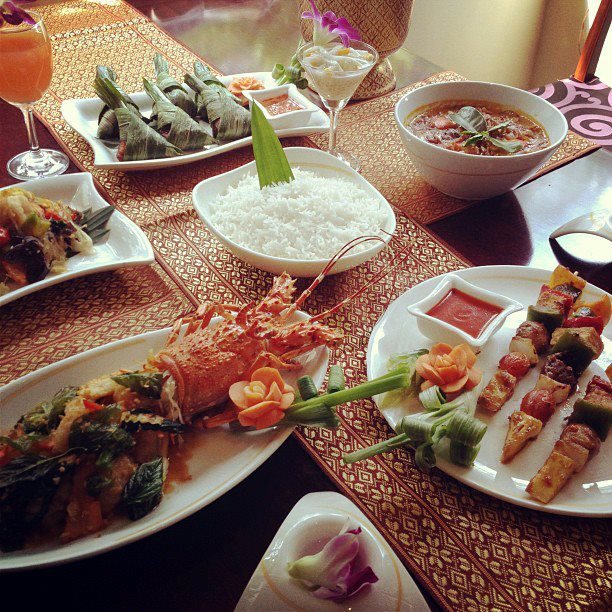 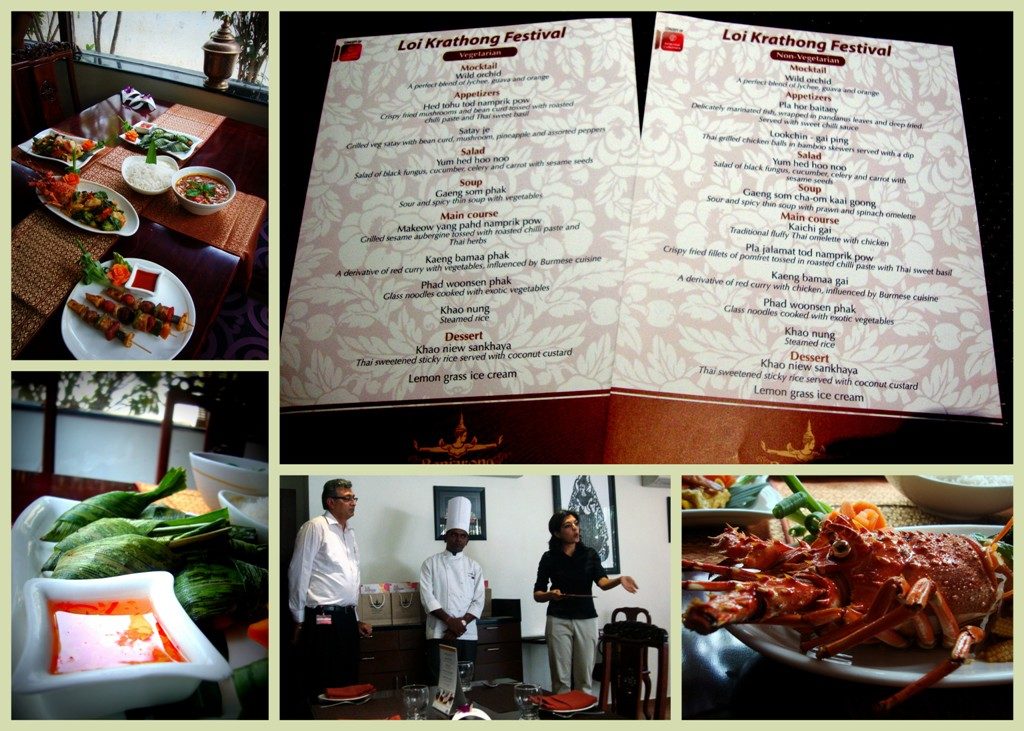 While we waited for the rest of the invitees to arrive, the chef laid out the specialties on a table along with a traditional urn. Two gold runners running criss cross added the glitz to the wooden table. The walls adorned with simple art work, few of which were made of paper, resembling those used in the puppet shows, were all reflective of the strong culture of the region.

A tall glass of Wild orchid [a mocktail- blend of lychee, guava & orange] it was quite a refreshing drink. There were two menus, one vegetarian and the other non vegetarian. The only thing common were the salad and dessert. 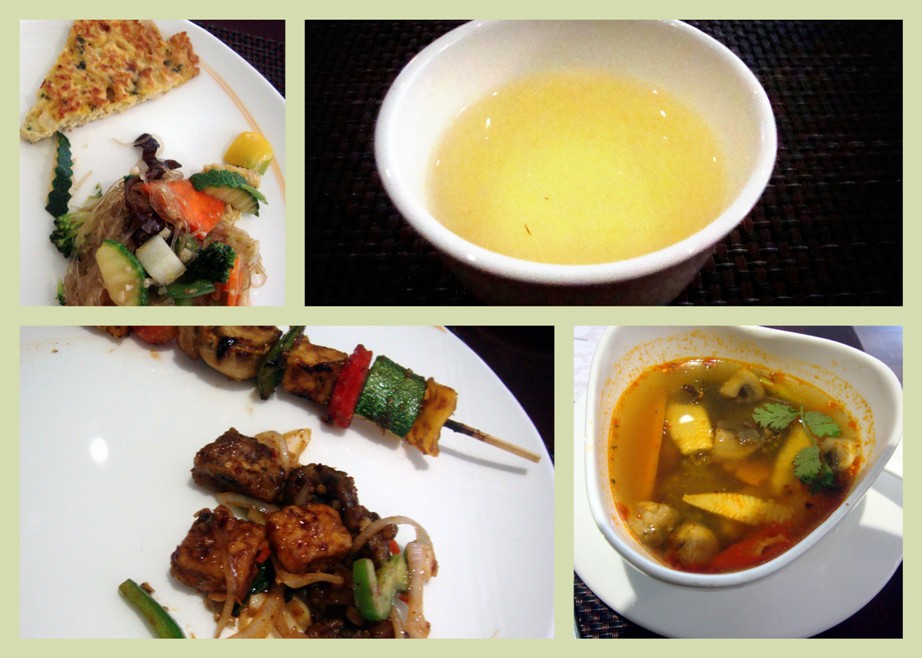 While the CEO and Chef spoke to us about the festival, and the recipes, we were served quite a few varieties of appetizers, sala and the soup. We had

The salad was Yum hed hoo noo- cucumber, celery, carrot, and black fungus tossed with sesame seeds – it was very nice, and easy on the palate. The one salad that i have enjoyed in the past is the Raw papaya salad, which i recently made at home as well.

The veg soup was Gaeng Som phak- a sour & spicy sooup with mix of vegetables along with lemongrass, galangal and other thai herbs. It hit right at the edge of the throat and was quite spicy & pungent as well. Needed a few glasses of water to get over it 🙂

Phew, i was stuffed.. But wait, there is more. The beautiful thing about Thai cuisine is their use of various flavours and textures. The main course blew me away….

Phad woonsen phak- Glass noodles cooked with exotic vegetables- This was my favorite of the entire menu. The noodles had a lovely texture, and the chef told us they just had to be dunked in hot water for less than a minute and tossed in vegetables. It had brocolli, zucchini, capsicum, onion and spring onion as well.

Another dish that had me surprised was Makeow yang pahd namprik pow[i know, imagine trying to order this in a restaurant, i’d die of starvation before i get it right]- this is a grilled sesame aubergine tossed with roasted chilli paste & thai herbs.- The brinjal melted in our mouths, and it had a hint of sweetness to it. I also tried a small piece of the omlette, simple & fluffy, it went well with this dish.

As we sipped on lemongrass tea, the chef requested we try some Khao nung [Steamed rice] with Kaeng bamaa phak [ red curry with vegetables that had a bit of Burmese influence as well]- this was zero spicy, which the chef mentioned was because of the Burmese spices added to the red curry paste.

This menu sure is a burst of flavours. But from the time i walked in and saw the menu, the one dish i was dying to try was the dessert- lemongrass ice cream. Lo behold, out came a long plate with a bowl holding the ice cream and a sticky rice topped with Coconut custard [with a hint of cardomom flavour] The lemongrass ice cream was a delight, such a refreshing flavour. Teppan[upstairs] serves Wasabi ice cream, which is yet another unique dish that i am yet to see on another menu. 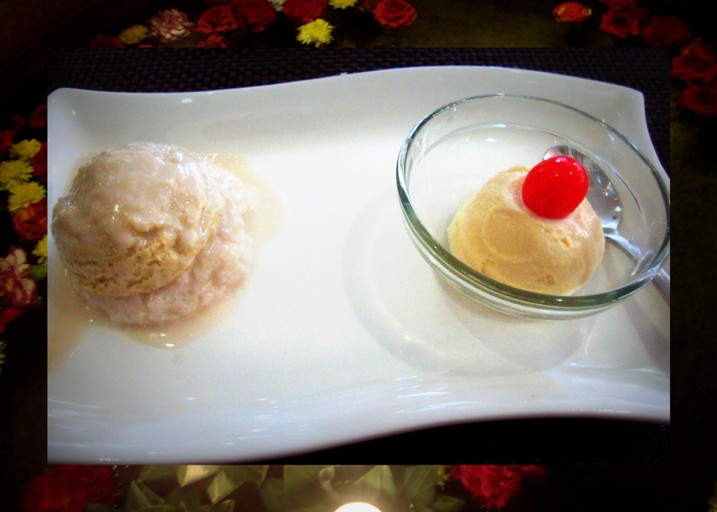 Before i bit the team at Benjarong goodbye, i was asked if i wanted to light a candle and let it float in the pond they had created? Ofcourse, i jumped on it. Made a wish for myself & for the hotel, let it float and hope all dreams come true!!

This festival is from 27th Nov to 9th Dec, so if you want to bid goodbye to your past and make a fresh start, join them in the festival of lights and bring joy to your lives!!  🙂