After hearing rave reviews, i nudged a few friends to watch Kumki. Alas, it was not to be, we were at the theater, Inox, waiting for the doors to open when a staff came over to tell us there was some technical issues and the screening was cancelled. Our hopes fell and we were disappointed. Anyways, that weekend an excolleague of mine called asking if i would like to catch up, and what do you know, it began with us watching Kumki, at Escape Cinemas, Express Avenue. 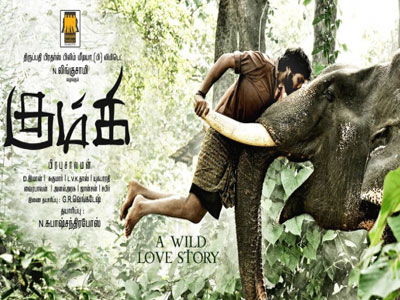 I had seen and enjoyed Director Prabhu Solomon’s earlier movie Mynaa, which is set in the village and is very rural. Wondered if maybe this movie too would be similar. There ends the similarity. The setting was the only common factor between the two flicks.

What was Kumki about?
It is a fairly simple tale about Bomman (Vikram Prabhu, Sivaji’s Grandson & Prabhu’s son),a mahout who along with his uncle and another help[played quite well by Thambi Ramaiah and Aswin] go from town to town with their elephant [Manickam]. They get invited to temple functions and other such small festivals. On the other side is the village of Adhi kadu [in the region of Panimalai, Marthandam)]where a wild elephant Komban has been on rampage. The wild elephant attacks women who are out in the field and has killed quite a few, especially during harvest season. Unable to deal with the menace and determined to not run away to another town [which is what the cops suggest the villagers do], the village chief calls for a Kumki [a trained elephant used to tame wild elephants] 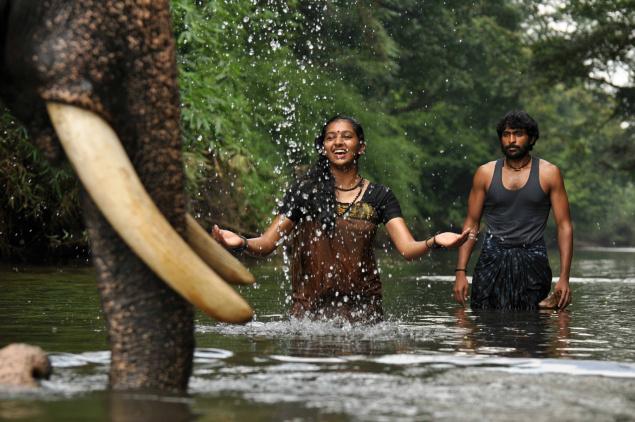 The scene where we are introduced to Komban and his rage is quite disturbing. He is all set to trample Alli [Lakshmi menon] when she slips and just about escapes.  One day when heading back to base after a brief spat with the officials after Bomman fails to show Manickam’s papers [which his uncle had lost somewhere along the way], the man who helps them Mani annan receives a call from the village asking if the Kumki elephant is ready to be transported to the village.
The twist in the tale happens now, the ordered Kumki elephant’s mahout is stuck with some personal emergency and says he will take about 3days to reach the village. In the meanwhile, Bomman volunteers to go to the village and hold fort till the real Kumki elephant takes over. The villagers welcome and treat Bomman, his clan and Manickam with great revere. While they are under the assumption that Manickam is a kumki, reality is that Manickam is indeed a very timid elephant who shies away from breaking coconuts

In a turn of events, Bomman sets eyes on Alli and falls in love with her, forgetting the real purpose of thier visit to the village. He decides to stay on, telling the owner of the real Kumki that he will manage, and train Manickam to deal with any kind of emergency. Eventually, he understands the severity of things and comes to a point where he says  “i cannot mislead the villagers, i am putting everybody’s life at risk, we should just leave” What happens next is the climax of the movie…

As real as the visuals are, i felt the director could have shown more scenes of Manickam and his antics, and of Kumban as well. The songs are beautiful, especially Sollitaale Ava Kaadhala ,Ayyayayo Anandhame and Onnum Puriyalai. The romance is sweet, the pride the villagers have of their property and heritage is amazing.
Vikram Prabhu has done an amazing job, for a debut artist. The scenes where he cajoles and pampers the elephant, the push ups he does on its tusks, wow… shows the relationshiop between a mahout & his elephant.   Lakshmi Menon fits the role perfectly and has played her role well.  Thambi Ramaiah is wacky as always, and infact i felt he got more screen space than others.

A movie worth a watch…. yet another offbeat story..