Relishing the Challenge- Up the Mahasu Peak

I
was in my 1st yr of college, infact it had been about 3months since
college began when we came to know there was a trip being planned to the Northern
part of India. I was all kicked about it and my parents had also given their
consent. It was to be a 12day trip covering Delhi, Shimla, Kulu, Manali and
around.  I barely knew my classmates
leave alone our seniors, but that dint faze me.

We
were given a rough itinerary and told to bring warm clothes as some of the
places we were going to visit would be cold or damp. It was the month of October,
so most of these regions were just getting over the monsoons. We landed in
Delhi and hopped into a bus heading to Shimla. After settling into our rooms,
we were told that the 1st site to visit would be Kufri. It was like
the Dodabetta of Ooty, it offers a 360 degree view of the valley below. Kufri
was once a part of the Kingdom of Nepal until the British took over the area as
part of the Sugauli Treaty. Infact, legend has it that the region remained quite
obscure till the British ‘discovered’ it in 1819. Since then, it has been
welcoming tourists from various parts of the world. 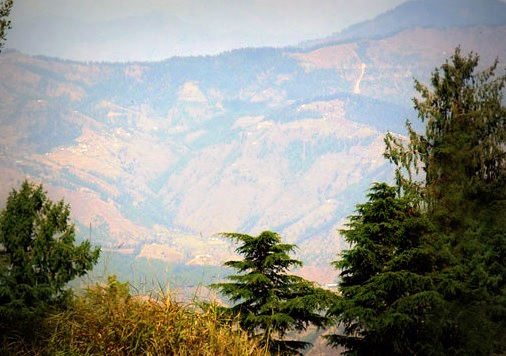 Our
teachers had consulted with the locals and suggested we make it to the Mahasu Peak before sunset to get this
panoramic view. We walked along the winding roads till we reached a path that
led up the hill. There were no proper roads, only stones and rubble with cedar trees
on either side. As we made our way up the path, through the forests, we spotted
quite a few tourist on horses, some going up while others were making their way
downward.

Mahasu Peak is infact the highest peak in Kufri. Took us quite a
while, somewhere along the way a few of us thought we would not be able to go
further, maybe we should just sit there and wait for others to return, but
braving the rough terrain, we trudged on. Now, this was a moment where I truly did
end up Relishing theChallenge. We finally
emerged atop the mountain and it was beautiful. The flat terrain had a few hawkers;
some selling fruit chat while others sold chai and soft drinks. We quenched our
thirst, tried some fruit chaat and spent some time resting our tired feet. We
also noticed a small spot that was the hub for adventure sports. Apparently,
when it snows, the peak transforms into a skiing arena.