Relishing the Challenge- Chugging along the coast

It was around this time 5yrs ago when my friend called asking if I would like to go to Goa? I was excited and replied “ofcourse”. She then went on tell me about her dad’s timeshare in Sterling and promised to get back to me with dates. After a few emails, the dates were finalised- 30th Oct to 5th Nov. She then forwarded the email her dad received from the resort with the confirmation details. I was eagerly looking forward to the holiday and had informed another friend of mine about the same. She chimed in saying she would like to come with me. Since her contract at work was coming to an end around the last week of Oct, she was all set. It was around 4th or 8th Oct when I began looking for flight tickets, found them expensive, went on to look for train tickets and nearly booked them when she dropped a mini bomb. Her contract was being extended and she couldnt take time off.

Yikes, what do I do? Do I go alone or cancel the reservations and think about it at a later date? These were the questions running in my head. I spoke to my friend who was gifting me the holiday and came to a conclusion. I was going to go ahead, albeit alone! I dint know if this was going to be Relishing the Challenge or dreading the same. But all I knew was I was back to being excited. I packed my bags, including the laptop [yes, I carried a bit of work with me], camera and just about everything else I would need.

Want to know the highlight of the trip? The train journey. I had booked myself on the only direct train to Goa. The train leaves Chennai every friday around 2pm and reaches Goa the subsequent day 1.30pm. Yes, you read it right. 23hour journey. And I was booked in a sleeper class compartment [meaning non AC].. People around me looked at me as if I had lost my mind.

“You are going to Goa alone?”

“You are going to be on the freaking train for nearly a day, and that too alone?”

“How will you manage in Goa alone?

“Cancel the trip and go later”

These were some of the not so positive comments I received. And there was this one friend who called asking what I was upto. I did not tell her about my trip till nearing its end. I knew she would give me a earful for going alone. No, she is not the “women should not travel alone” kind of person. She worries about me and smothers me with love, so would be freaking out had I told her ahead of time…

And so there I was, in the train, in a near empty compartment. There was a lone guy besides me, he was sleeping in one of the berths in the next booth and looked like a vagabond/drunk/tramp.. I was a wee bit scared, especially since I had quite a bit of luggage with me and there was no way I could even go to the loo without worrying about my stuff.

Luckily, another couple boarded the train just as it was about to pull out of Chennai station and it was good to see other faces. The tramp guy was chased out by the TTC.

What a train journey that was. I enjoyed every minute of it and now when I look back, I wonder what I did to kill those 23hrs.. I must have listened to music for a while, read a book, slept, walked up and down, observed the people around in the platforms and stared at the watch to see how much longer was left before the train came to a halt at Margao. I do remember sitting on the steps near the door as we approached Dudhsagar falls and gaped in awe at the beauty. 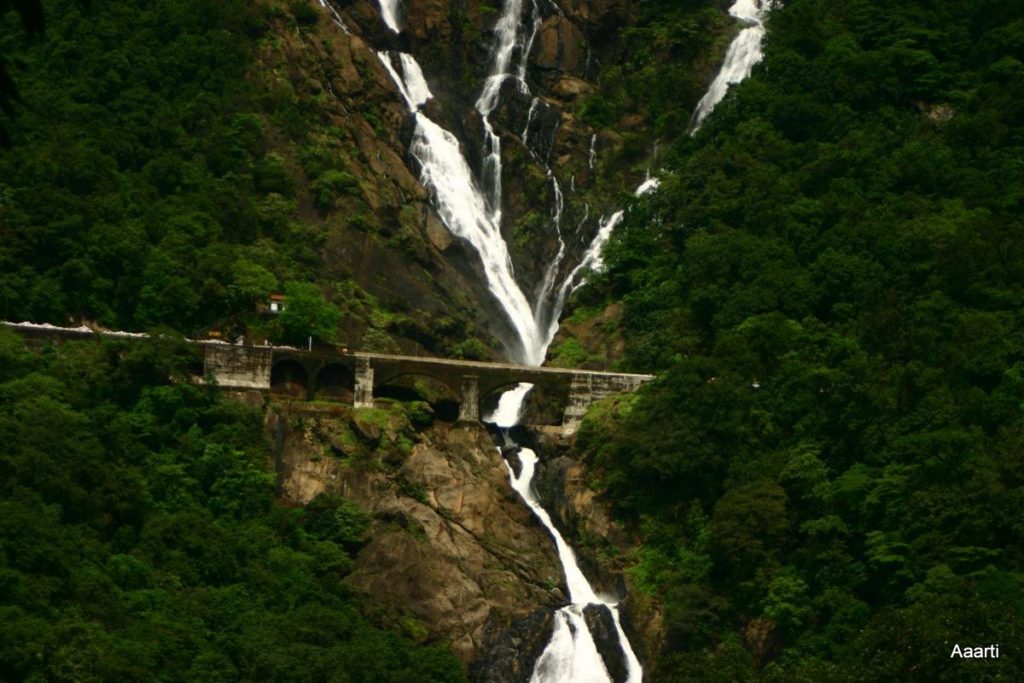 This was one memmorable journey that I shall remember for years to come. Who knows, I might even end up sharing this tale with my grandkids.. 😀