I was randomly sorting through the folders in my HDD when I came upon a folder titled Images and I spotted quite a few taken during my earlier trips across the country. And then there was this folder within it that contained some pictures shot during a visit to Delhi few years ago with mom and sis. I remember on evening we headed to the Qutb minar and my uncle had promised to join us later for dinner. We got out of the car and my sis exclaimed ” ma, that is a tall tower, what is that?”

The Qutab Minar I discovered is 73 mts high  and is a tower of victory. It was built in 1193 by Qutab-ud-din Aibak right after the defeat of Delhi’s last Hindu kingdom. The tower has five floors or storeys, each one distinctly marked through a projecting balcony. The tower tapers from a 15 mt diameter at the bottom to a mere  2.5 mt at the top. When you stand below the tower and look up, you can only see 3/4th of it, to see it all you either have to step back or lie down at a distance 🙂

The first three floors are made of red sandstone; but the 4th and 5th made of marble and sandstone. As I walked around, I noticed the Quwwat-ul-Islam Mosque near the base of the tower. I overheard a guide tell a group of people that this is the 1st mosque to have been built in India.  I read an inscription that said the building was built with material obtained from demolishing ’27 Hindu temples’. 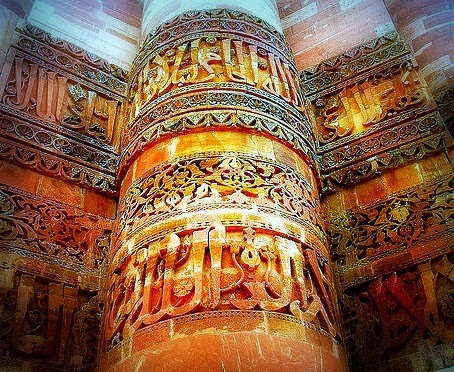 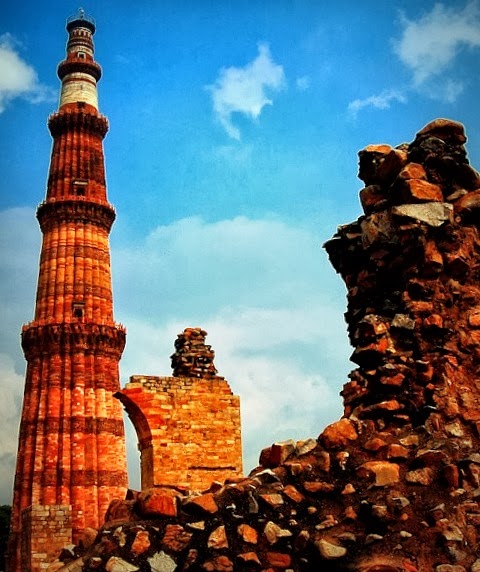 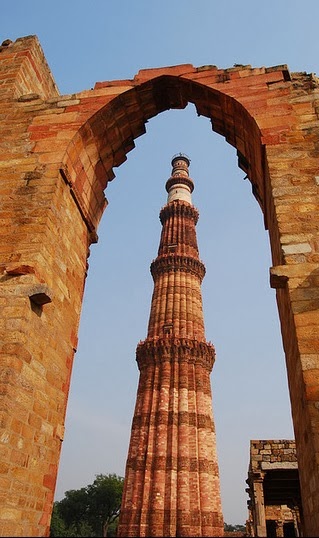 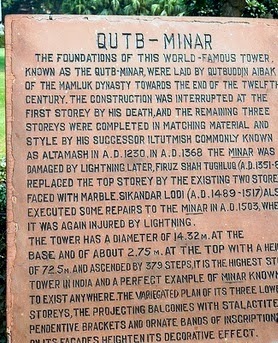 At a distance I noticed a crowd of people around what looked like an iron pole. Upon closer inspection I learnt that it was a 7 mt high iron pillar. It is said that if you can wrap your hands around the pole, whatever you wish for will come true.. What the heck, we tried it as well.

The one mystery around this place is why the Qutb Minar was built. Some say it is to display the victory and beginning of Muslim rule in India, but there are others who speak differently. Either ways, it is a beautiful place to visit, especially on a cool winter evening.  I could hear my mom screaming my name, we then headed to a small cafe nearby.