I had been fascinated by the Step wells since I laid eyes on the very 1st one, in Karnata- Hulikere. Since then, I have been reading about these wells, the architecture and trying to visit one in the destination I hit. I spotted one in Hampi- the Pushkarni, inside the Royal Enclosures. And then, last December when i was in Delhi, I managed to convince mom and uncle to come with me as i went searching for the Agarsen or Ugrasen Ki Baoli near Connaught Place, a short walk from Jantar Mantar.

We drove around a bit, and finally located Hailey Road where the Baoli was situated. Parked the car few streets away and began walking down. I was excited, mom was just tagging along and uncle was curious to see what this hidden treasure in his city was. On our left, the wall had a huge vibrant Ganesha mural, that led to a demon face, an angel or devil and a cross on rosary beads…. fascinating!! 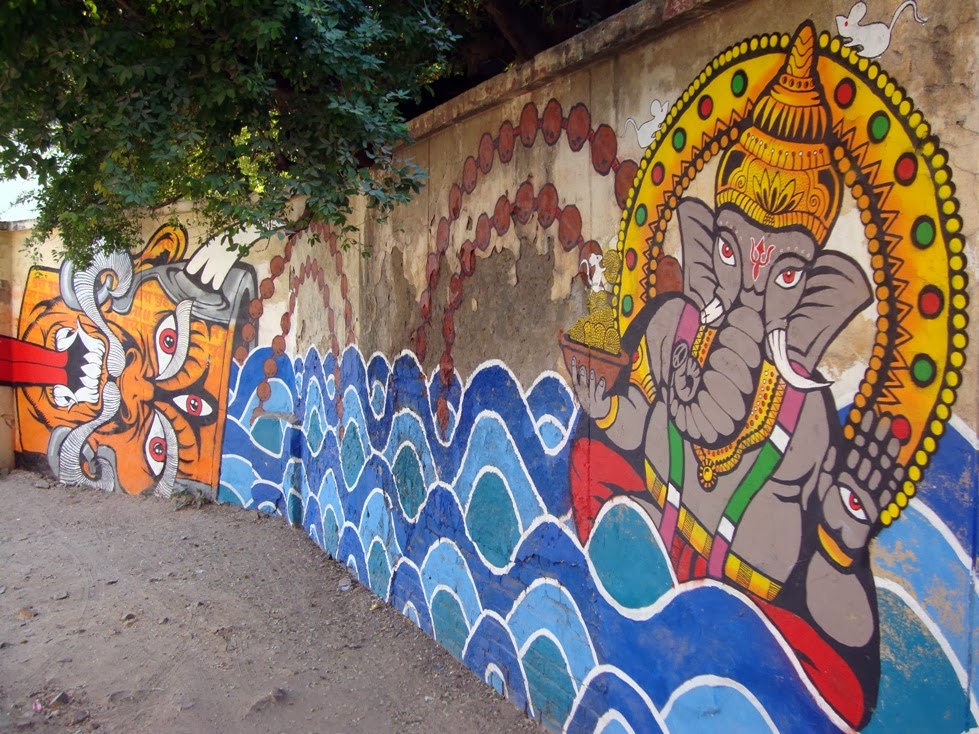 A few steps up and we spotted the traditional ASI board that said  Agrasen ki Baoli  or Ugrasen ki Baoli  is a 60-meter long and 15-meter wide historical step well.   Even though there are no records of who actually built this well, legend has it that it was King Agrasen who must have built this well during the Mahabharatha epic era. It was repaied and rebuilt in the 14th century by the Agarwal community which once again traces its origin to Maharaja Agrasen. The first thing I noticed was a dilapidated tomb of sorts on the right side, there were a bunch of chairs piled up and a dog sleeping. And then as I turned left, I was left speechless.. It is one among the many in Delhi. During rainy season or the monsoons, nearly all the 103 steps are submerged in water. Since it was winter, we were able to see far below. There are three levels, and each level is lined with arched niches on both the sides.  The stone walls of the well are stark yet beautiful, forming a 60 x 15 meter rectangle structures.. The bricks are all in good shape, just that the place is now inhabited by pigeons. Situated in the midst of towering concrete structures, it sure was a visual treat. I dreamt of how the place must be filled with water and how the Kings & Queens used it back in the days. Hoping to visit the others during my subsequent trips to Delhi.