“We started our careers together
and always wanted to have our own Bistro kind of a place. And since we are now
together, working in our Bistro, the place is called The Bistro Story” said Ravi [one of the owners]. That was the clue- The Bistro Story is where we were for dinner last night.

If you know Gopalapuram layout, you will know where National Public School is, there is a lane bang opp the place that is Sadashivam Street. As you drive down the road, you will The Bistro Story on your right nearly at the end of the road. That is where we headed to.  They officially opened their doors a week ago, and it looked like a cozy place. It was around 7pm, and since we were the only ones and so got a tour of the place, including the small bar style seating area outside. 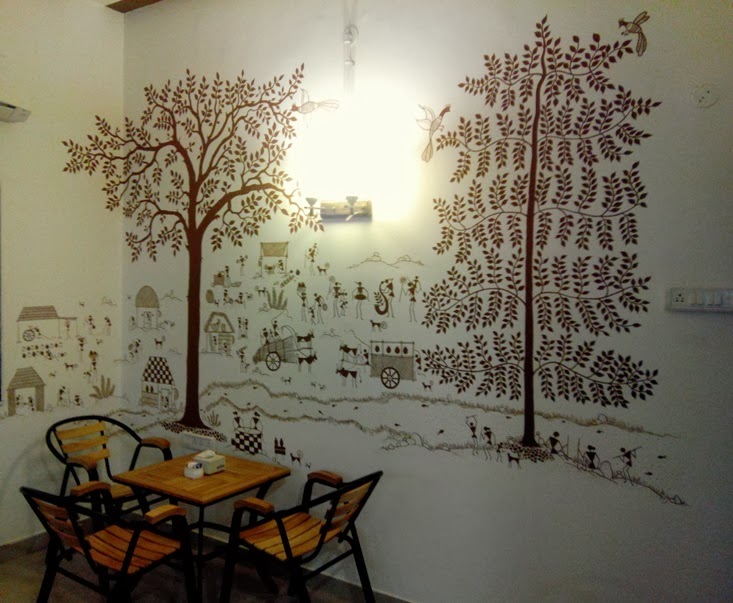 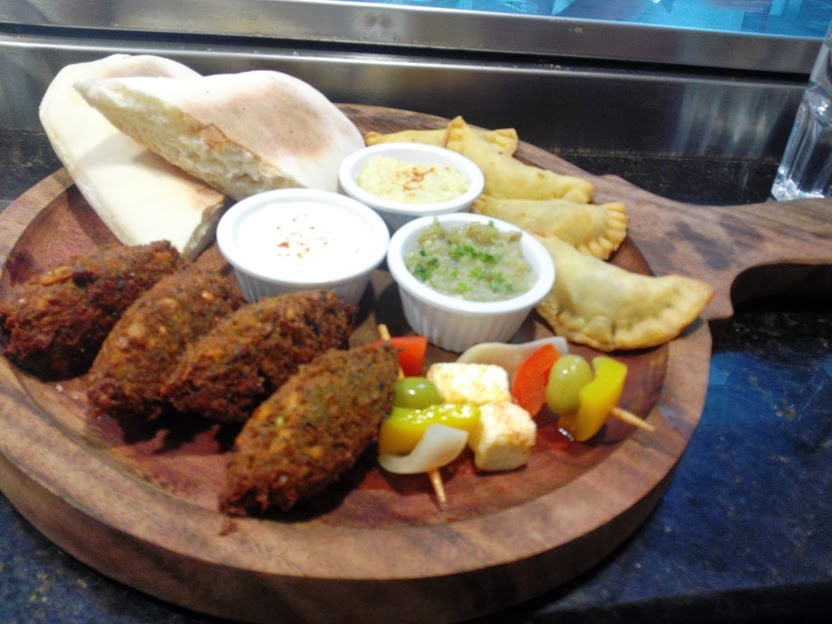 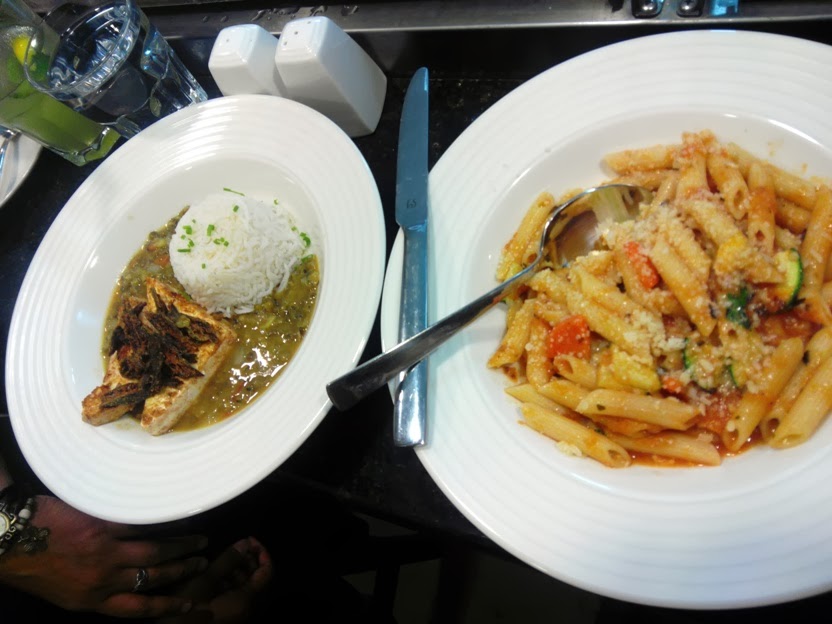 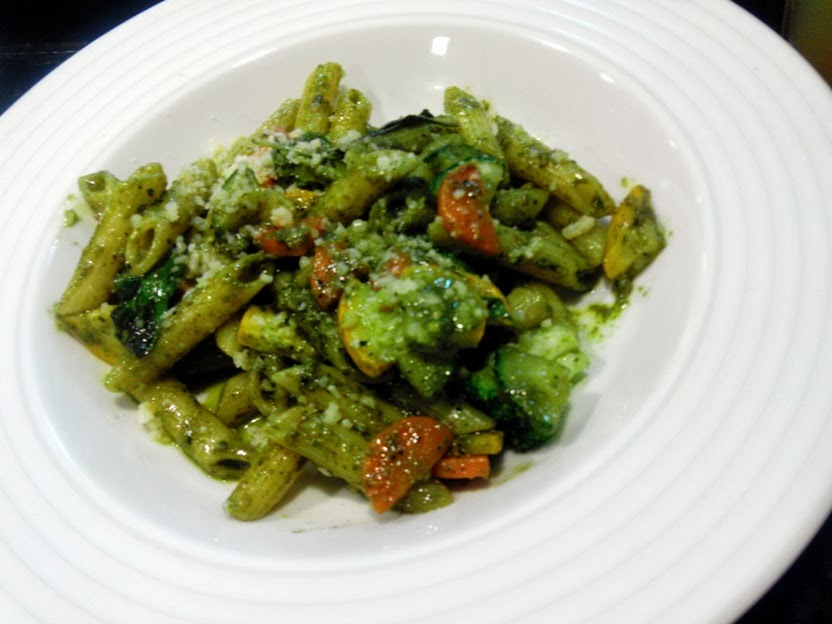 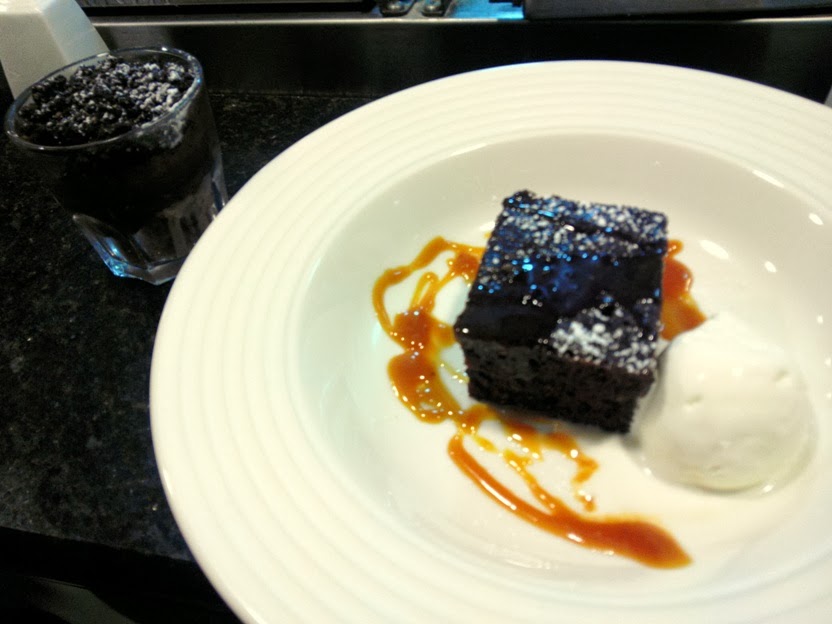 The main hall as you enter has a bright poster of a pop up art on the wall, while the other room on the side has an elaborate Worli painting on the wall [it apparently took the artist 5 whole days to complete it]. After much deliberation, we decided to sit on the stools near the kitchen area. Even though the counter space was tad less, it was still comfortable and we had a good evening.

We were introduced to the Chef, Vijay who spoke about his career and how his forte is French & Italian, but they have included Mediterranean and a few dishes with Indian touch on the menu as well. “He is a hard core veg, but cooks non veg dishes with panache” chimed in Ravi.

To start off the evening, we
ordered a drink each- Aam panna [raw mango juice], Rose milk and Jal jeera. All
of them were yumm to the dot. While we savoured our drinks, we waited for our
Eastern bites platter to arrive- it is similar to the Mezze platter- Falafel,
pita bread, Fattayar [mini samosa with spinach and cheese], feta cheese and 3
dips- hummus, tzatsiki and babaganoush. The Falafel was just wow, so was the
Fattayar, and so were the others on the platter. They were all hot, fresh and
filled with unique flavours. Big thumbs up for this dish!

The little one wanted Fries, but
the Chef convinced him to instead try their Nachos and he promptly did. It was
a plate of goodness- Nachos with a touch of cheese served with tomato salsa. Yet
another good dish.

For the mains, we decided to do
with 2 pasta dishes and one paneer. The paneer dish had 2 paneer triangles
sitting on a bed of cooked lentils served alongside a cup of rice topped with
okra fritters. It was alright, very Indian. The highlight of this dish were the
Okra fritters [ I could have eaten a big bowl of just that]
The pastas- one with tomato,
basil & burnt garlic sauce, while I went for the Pesto [basil, parmesan
cheese, garlic, olive oil and pistachio]. Both were yummy, but I loved mine
more [am a sucker for pesto].

While we were busy enjoying our
pasta, the little one went ahead and got a bowl of French Fries [he knew what
he wanted and wasn’t leaving without it…] Kids~!!

Through the meal, we kept talking
to the Chef [hopefully not distracting him much], and got a bit of insight into
the kitchen and the things they created in that cozy space. Most of our dishes
he cooked on the Induction stove, but there were huge burners which he said
kicked into action when the place was packed or large volumes were needed. He
also told us about how they relied on locals for their produce and did not
import anything. For ex, their Cheese was from Pondicherry.

Phew, we were stuffed but well
the lure of the dessert lingered. We chose the Sticky pudding with toffee sauce
& vanilla ice cream while the little one chose the triple chocolate mousse
[hope I got the name right]. I quite enjoyed my sticky pudding, but felt it was
tad sweet and so sprinkled some salt  on
the sauce and it made a world of difference, enhancing the taste…

They are also going to be introducing
breakfast shortly!!

Ambiance- V good, pleasing
colours and décor
Price- Starters, mains and desserts are priced between Rs 120 to Rs 295 [giving you a rough idea of what the pricing is like].
Meal for two will work out to about Rs 800- Rs 1000
Overall experience- v good
Car parking- there is space for 3 cars right
in front, and about 4 more along the road. They are looking at other options
for parking as well.