As we were driving along towards Matara, our driver announced there was a Blow Hole nearby and asked if we wanted to visit. Ofcourse we did!! We nodded our heads till it was ready to fall off our shoulders. He then drove into a narrow lane and puled into a parking lot. Now this amazing thing about Sri Lanka is that in most tourist places, the parking lots are manned by locals. There were old women standing around every corner inviting us to park in their spot. Maybe that is how they earned their living.. Here, we pulled into a lot near a small shop of sorts. We paid the parking fee to the lady [about 100LKR] and made our way down the narrow lane around bends and corners. And then came a sudden flight of steps, basically rocks put together to form steps. We climbed up about 20 of these, came to a landing and then up another 40-50 steps. And then when we stopped to check the place out, we caught the beautiful shimmering ocean beneath.

There is a small center of sorts with pictures and posters describing the Blow hole and different sea animals around the place with seats meant for school kids[ a visitor information place]. This is also were we bought our tickets [500LKR for the 2 of us] and then went on to find the way to the Blow hole. There were a bunch of rock steps leading up into the trees and beyond. I noticed a couple come down from there and wondered how far the spot really was. And then there were few steps down to the ocean, which was just too inviting to resist. 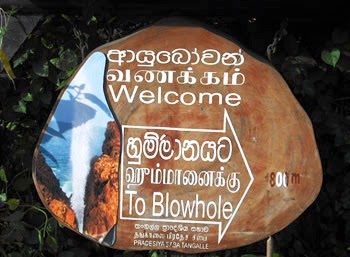 My friend and the cab driver went ahead and I caught up with them slowly. I dont have a few of heights, but the rounded rocks were a challenge… I finally reached the top and saw nothing but open space. There was the ocean below, and then I noticed a path of sorts had been made by the high ocean waves. There was railing all around and we positioned ourselves right in front, near the guy who worked there. Ajith has been working at the Blow Hole site for 7yrs now and he says he loves it. He is all about “wait 2 mins madam, it will come, so many big ones in morning.. low tide.. one more.. one more…” kinda guy!! We stood there for nearly an hour, watching the little squirts and a few big ones pop through the cliff . It sure was a sight to behold… 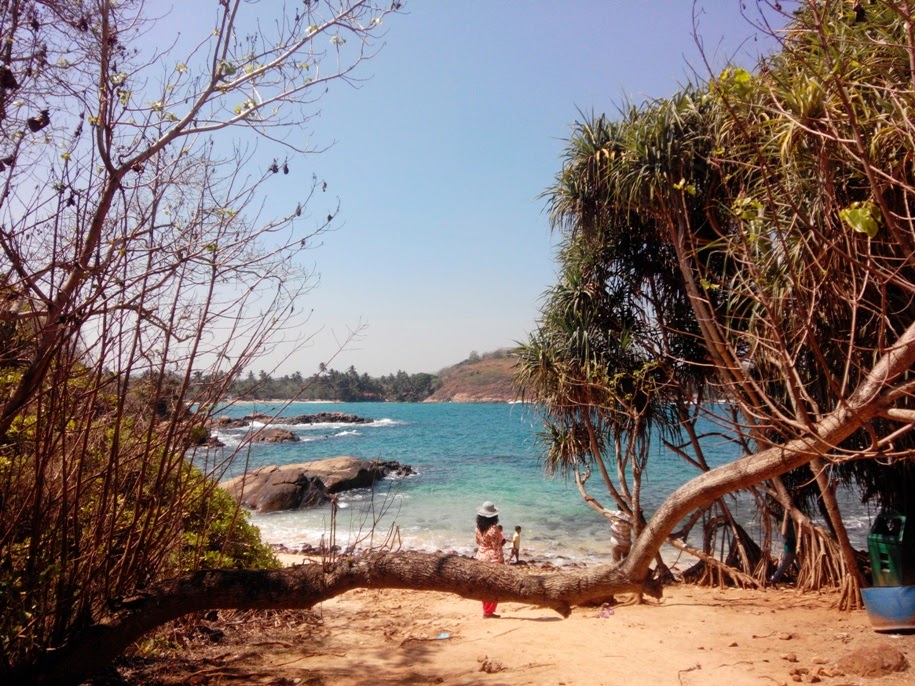 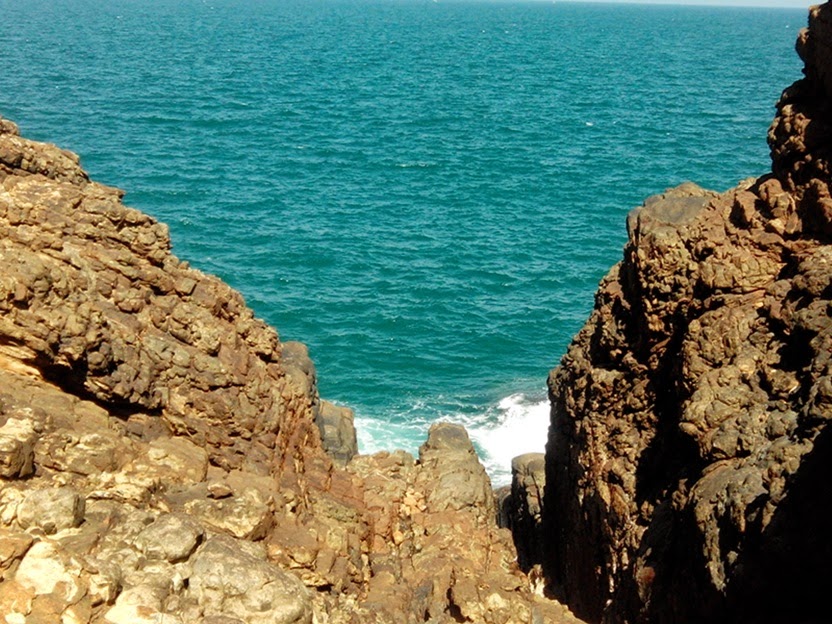 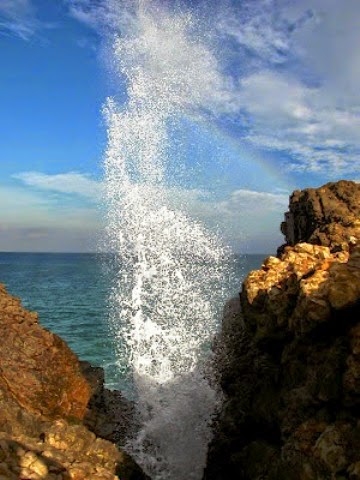 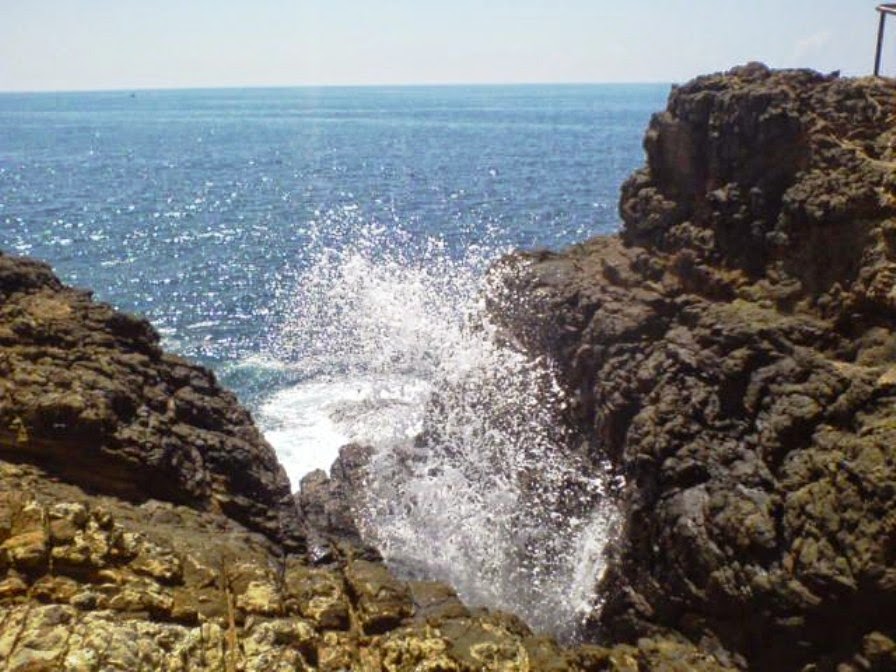 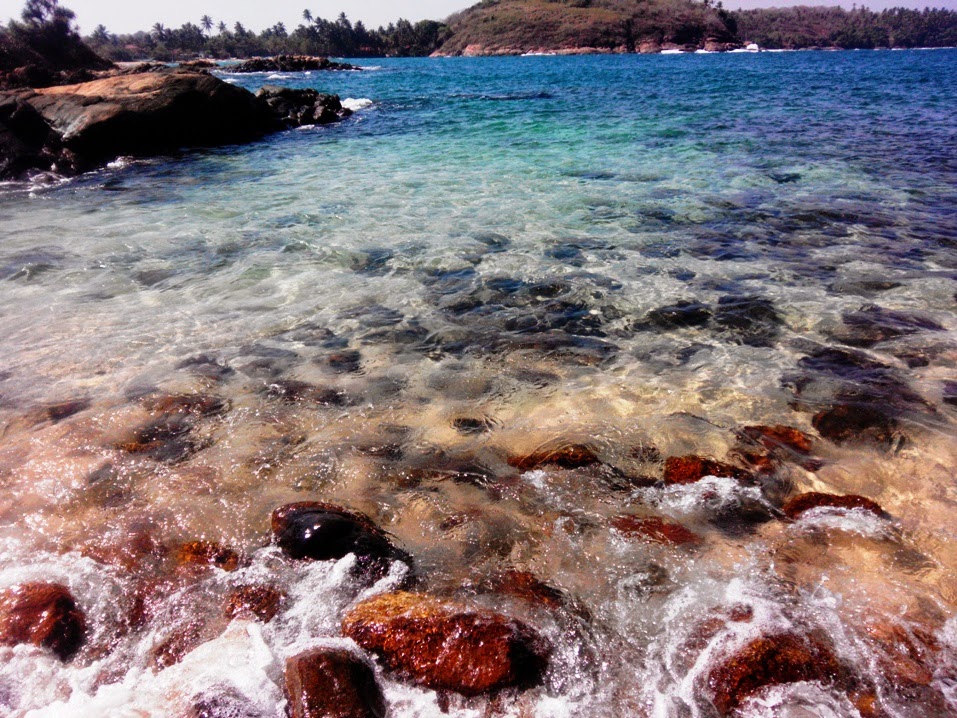 The Kudawella Blow Hole or Humannya is a rare geological formation of nature. Situated at the southern coastal village of Kudawella, it is the only Blow hole in the entire Asian subcontinent and the 2nd largest in the entire world. The Kudawella village name literally translates to “small beach”, it took quite a hit in the 2004 Tsunami  and is in near ruins today.

The blowhole itself is a natural crack in the rocks, and when the wind blows in the right direction the water shoots up the cliff and into the air The water shoots up above the cliffs during the monsoon seasons [Ajith told us it rises over 30-40 meters]. Infact, the place Humannya [Hoo-mannya] derives its name courtesy the  wooshing sound of the water as it comes up the cliffs.

We got down half way, went over to the Emerald ocean, spending a few minutes standing amidst the rounded rocks, collecting shells and then made our way back to the car. We felt like we had traveled to the moon and back!