There we were at a hotel that was just few weeks old, Rasoja near Kataragama, and the man who manned the reception doubled up as the bellboy and Chef and just about every other role you could think of… After showing us our room, we asked him about Dinner and Breakfast options. Everywhere we went, the Hotel guys would be fine and be all set to rattle out the menu, until we mentioned the big word “Vegetarian” and then they go silent for a few minutes, stare at us, smile and then go on to rattle out all that is possible in vegetarian…

This guy was kinda lost, and we had to rattle out dishes from which he picked Veg noodles and a veg chinese side dish. Within minutes there was a knock on our door and he announced that dinner was ready. We walked down to the small dining room down the corridor and noticed the table was set, and there was a big plate with a heap of Noodles on it. He then brought a bowl of veg gravy [Chinese style]. Even though the noodle was tad burnt, it was good, we were hungry. The side was even better… With a dash of pepper and salt, it was quite yumm… We gobbled it up, and were done for the day!
But the guy came back and asked us what we would like for breakfast.  He had a help in the kitchen who knew not a single word of any language but Sinhalese. He told us he could make dosa with daal curry and sambol for breakfast. Both of us grinned ear to ear on the mention of Dosa. The next morning promptly there was a plate with 5 dosas, a bowl of Daal curry and yumm looking coconut [pol] sambol. 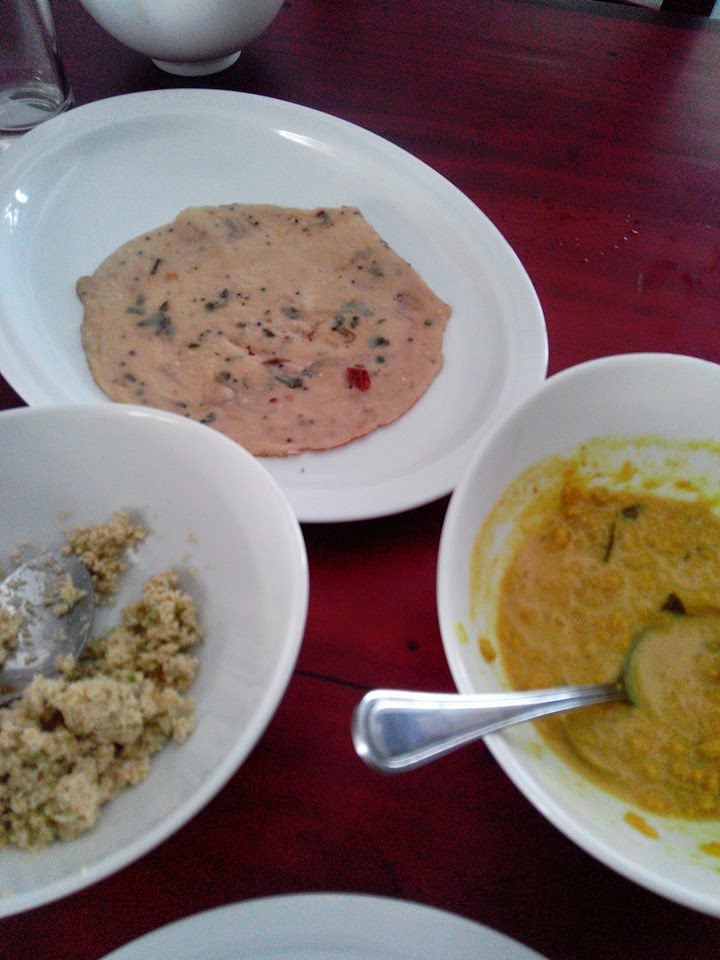 The dosa was made with wheat flour, chillies, and other spices and was quite good, thin and soft. The daal curry had onions, garlic, toor daal and channal daal. The sambol was made with coconut, green chillies, garlic and some onions!! What a delightful breakfast that was.. We were happy bunnies after gobbling up 2 dosas each.

** Sambol is made with various combinations, incl dried fish[ for all you non veggies]