Food is all that matters- Chennai Floods IV

[Meaning- If there is no food available for even one individual, we will destroy this world.]


During the weeks when it poured like there was no tomorrow, the only thing on everybody’s mind was “do we have adequate drinking water and food”.. The bunch of us who were working on providing relief were also focussed on the same thing! We realised, people might be stranded, might not have power, phones were down, so was internet, but the one thing we all needed was clean drinking water and three meals a day..

The two weeks was sheer madness, figuring out who was doing food packets,who was collecting water packets/bottles. All we did was run from pillar to post, collecting as much of these as possible and getting it to people who were stranded.


A friend of mine who lives in Pallikaranai, one of the severely affected area said he got food courtesy a chopper one noon. I can’t even imagine what it must have been like. And then there were others struggling with little ones and no milk/biscuits/bread even..


We saw people make a grab for anything they could get their hands on. The minute they saw a car or truck come by, they knew it was relief materials and would attack instantly. People fought, there were words exchanged, children who came to pick up stuff were getting squished.


One of those days when we were on OMR, we discovered Fathima Child Welfare centre, the place had a good 2-3 ft water. The lady in charge, came out in that to meet us at the gate. She told us they got lunch courtesy the local counsellor but they had three centres in all and did not have enough water or other things, including medicines.  We gave her a bag of water, some medicines,and sanitary pads as well .. One of the kids from that centre was sent to show us the way to their other two centres, and he was one spunky kid. Said hot food was sent over daily, and he had been there for a few months now.. There were little ones at one centre, where we gave quite a few biscuit packets.. There were teen girls who sheepishly took the sanitary pad packets, some refused to come out and had friends picking up stuff for them.


There were moms in some areas who were happy to pile in as many biscuit packets as possible, and some even gabbed the Glucose boxes we had. They said there were few old people who were zero on strength and this would help them..

Food packets given by a team in Anna nagar.. 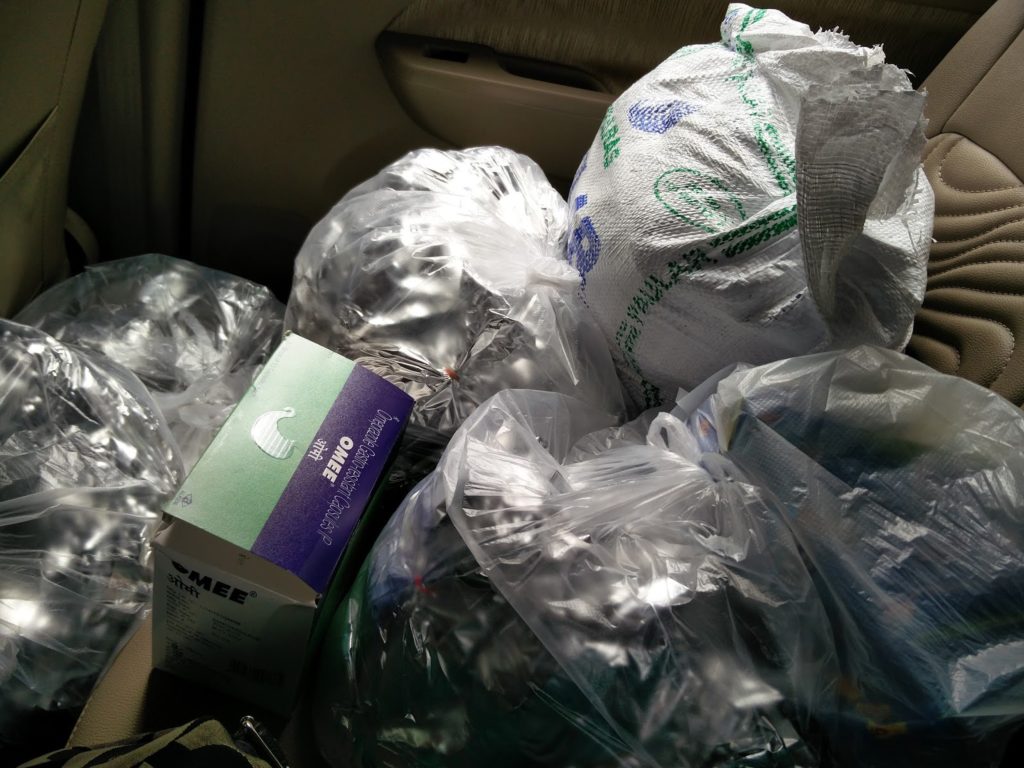 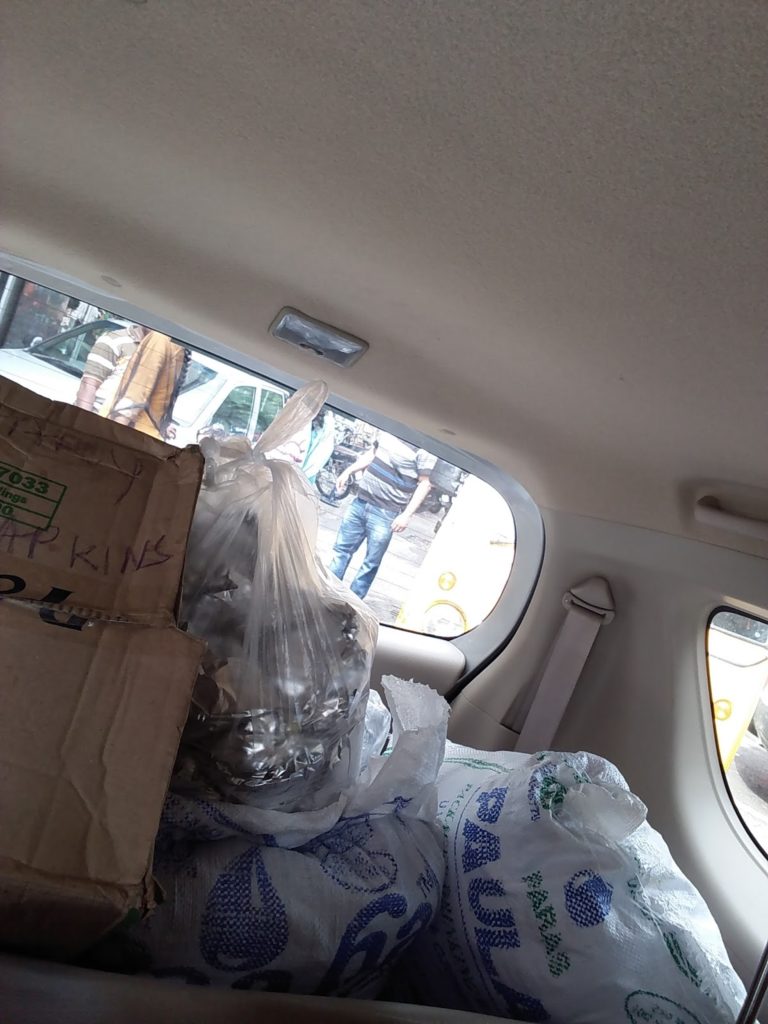 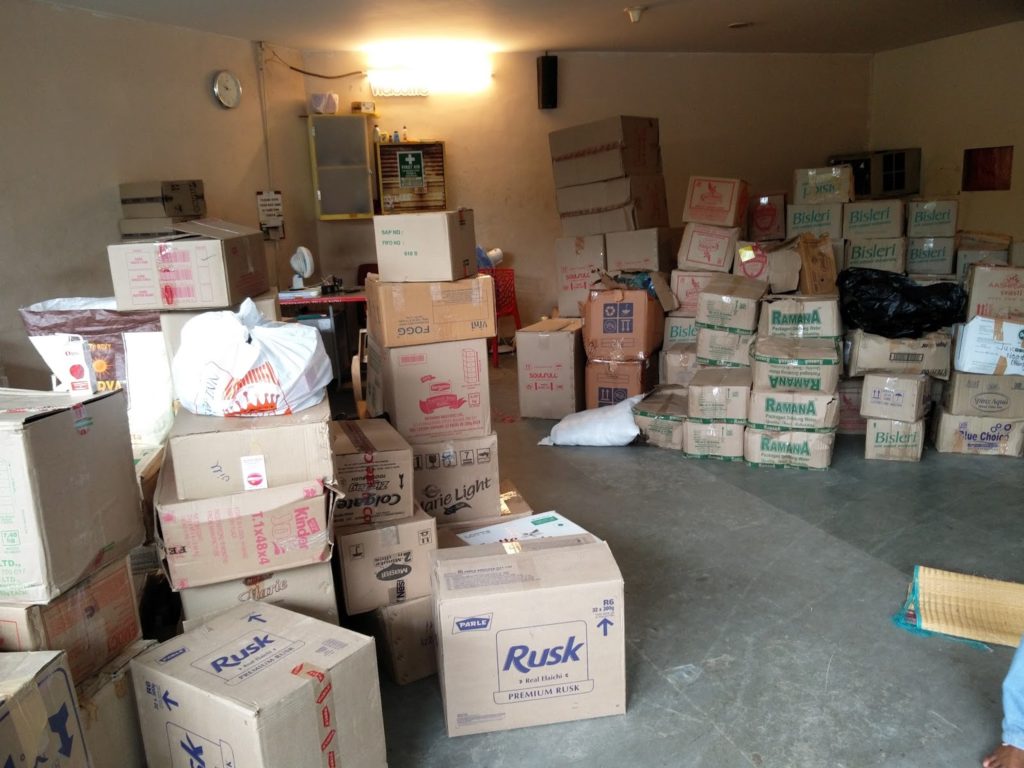 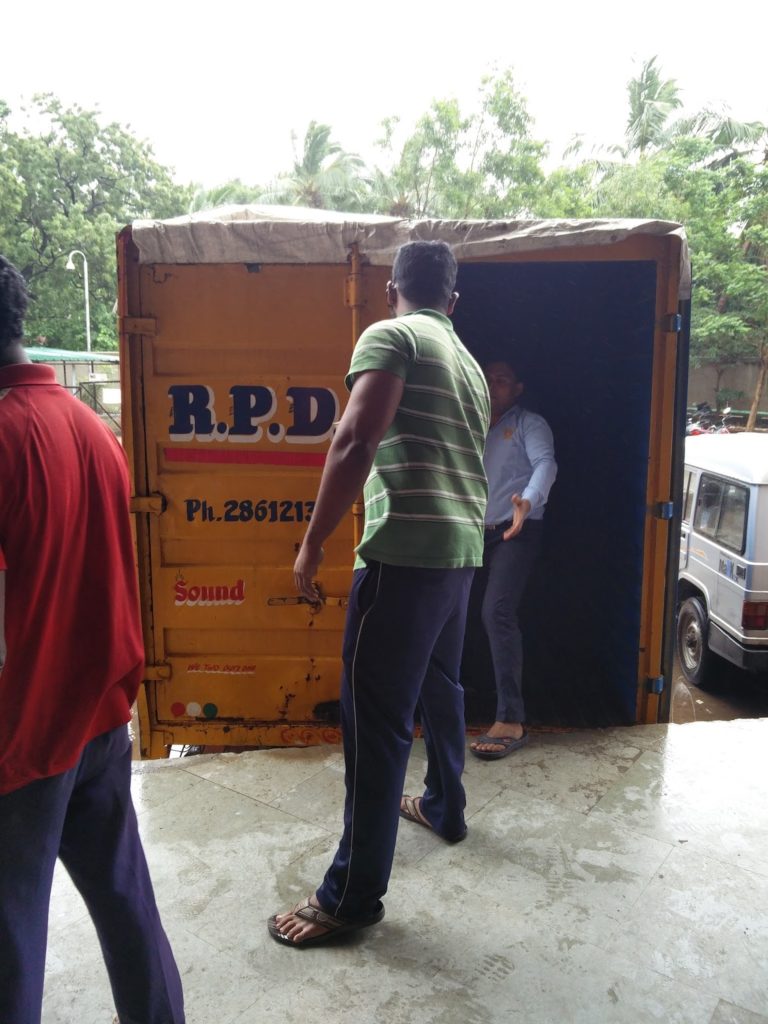 Just 10% of what we loaded that particular day.. we were all to track in this lorry but it was overloaded with stuff that we drove in cars..

While it made us happy to help people, we also noticed a few being rowdies. They would take food packets, inspect the content and either chuck this to eat the one they had received earlier or chuck that and eat this… Biryani over lime rice.. you get the drift… and one or two were trying the sell the food packets they got to people who had no energy to make it to the trucks.. we also stumbled upon a few who graciously turned us down saying they had already received food, and asked if we had few other times..


Another interesting moment to be shared is – we had hired this lorry and had gone to give out relief material.. Friend, her husband , son & I were in one SUV.. We had stopped in one place, loaded stuff onto the cars and went to distribute. The kid saw the lorry driver pick up a food packet and dig in.. few minutes he grabbed a bottle of water when loading and gulped it down.. this continued through the day. The kid got peeved. He kept saying “how can he just like that take and eat/drink.. not done… “. We smiled and told him “its ok, as long as hungry soul is fed, we are doing good..”


Tough times teach you to survive, it also teaches you it is survival of the fittest..


Well,all said and done, the relief centres were all whipping out food packets and relief materials by the millions.. each packet hopefully reached the hungry souls, giving them hope to get through the day!!

The other posts in the Chennai flood series can be read here,
When the going gets tough, the tough gets going…Chennai floods -I

When the going gets tough, the tough gets going…Chennai floods -II

When the going gets tough, the tough gets going…Chennai floods -III