Ah, we had finally reached Haridwar, checked into the room – Hotel Khanna Palace [it wasn’t in Har ki pauri as Cleartrip listing had stated but was about 5kms,which was alright..]. Since there were no traffic restrictions or crazy crowds we were in a good space.
After checking in, we had a cup of tea and decided to head out towards Har Ki Pauri to witness Ganga Aarti. Since the next day was a special day -Vasant Panchami, friend said it would be best we do all possible today itself as it might get beyond crowded tomorrow. Off we went, walking, we walked and walked and walked till we couldn’t walk anymore..[lol..i exaggerate], but we must have walked a good 3-4kms and it was close to 6pm, we did not want to miss the Ganga Aarti and so decided to hail an auto . The auto stopped at a certain point and we had to walk uphill once more for about 2kms till we reached a flight of steps that led to a path beyond which lay the main Ganga temple where they did the evening Aarti… As we were walking towards the temple, we heard the loud speakers blaring songs in praise of Ganga Maiya and Shiva.  You will find hawkers sell wick lamps or diyas to float in the Ganges.We spotted a bridge, and cops nearby. When we enquired about the Aarti, cops told us it was over but a lady sitting nearby told us to hurry and that the Aarti was just about the begin.
Ganga Aarti was basically a small puja done for the River and Aarti showed to the river by 5 different priests around the main temple in Har Ki Pauri. The steps are filled with people who have come ahead of time and grabbed a good spot. We stood on the other side of the river which offered a good view. The temples were all beautifully lit up and all we could see was a ocean of bobbing heads and cameras ready to click away when it began. 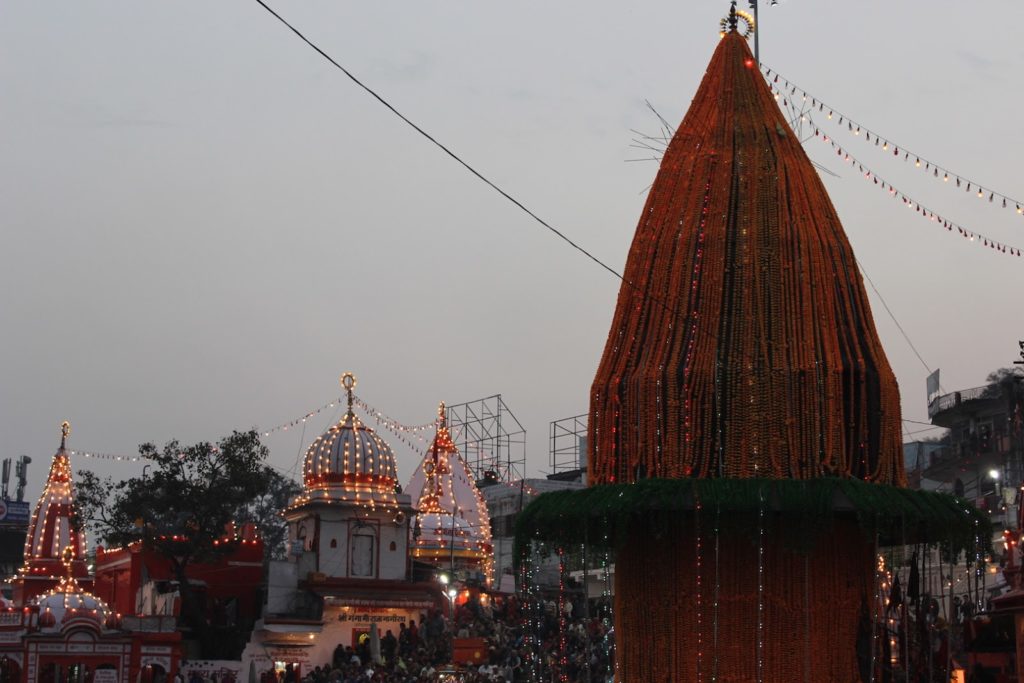 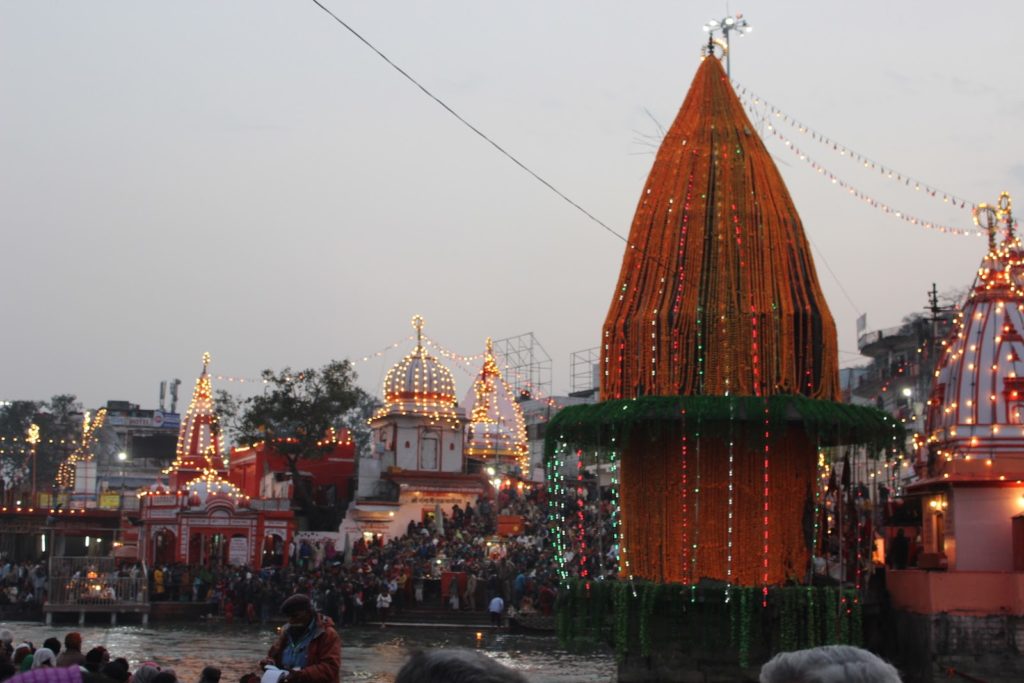 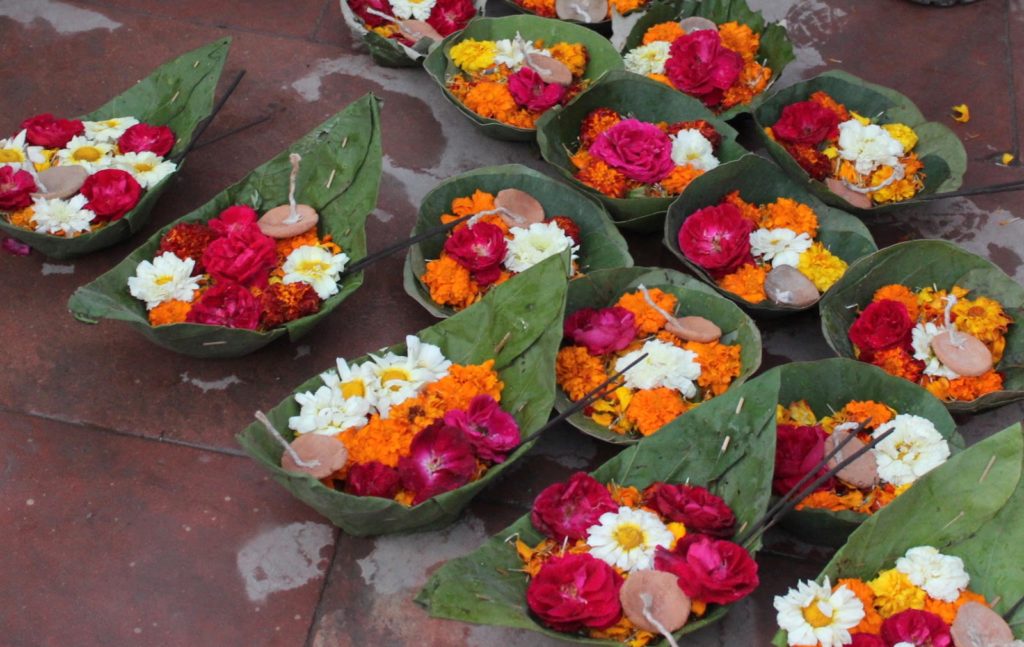 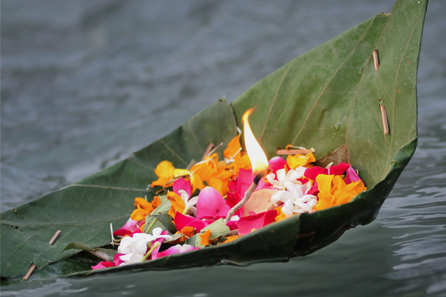 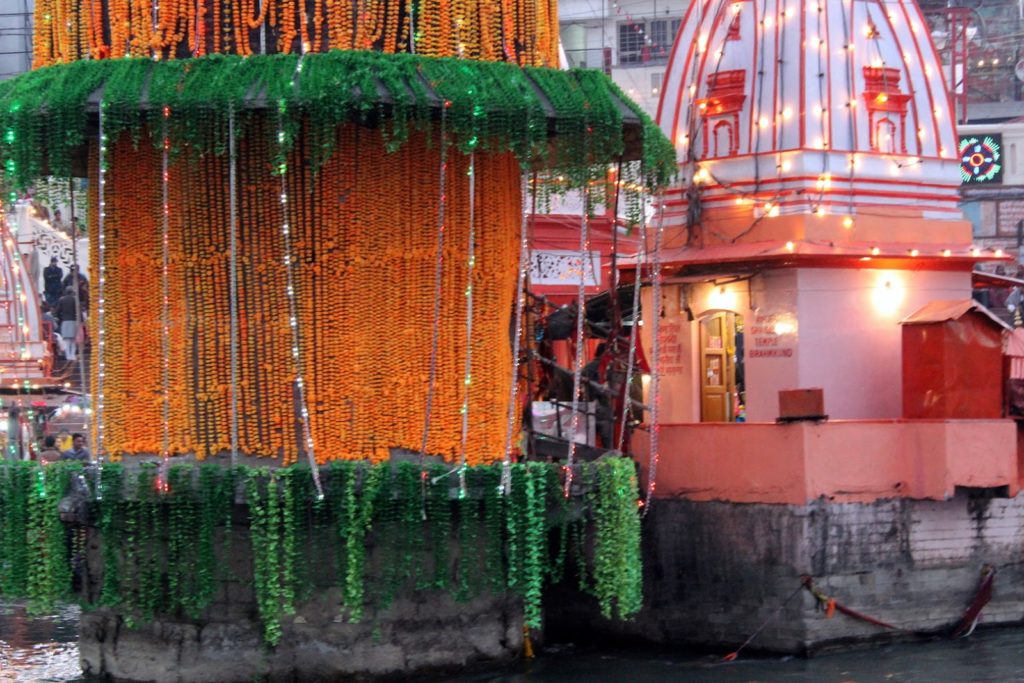 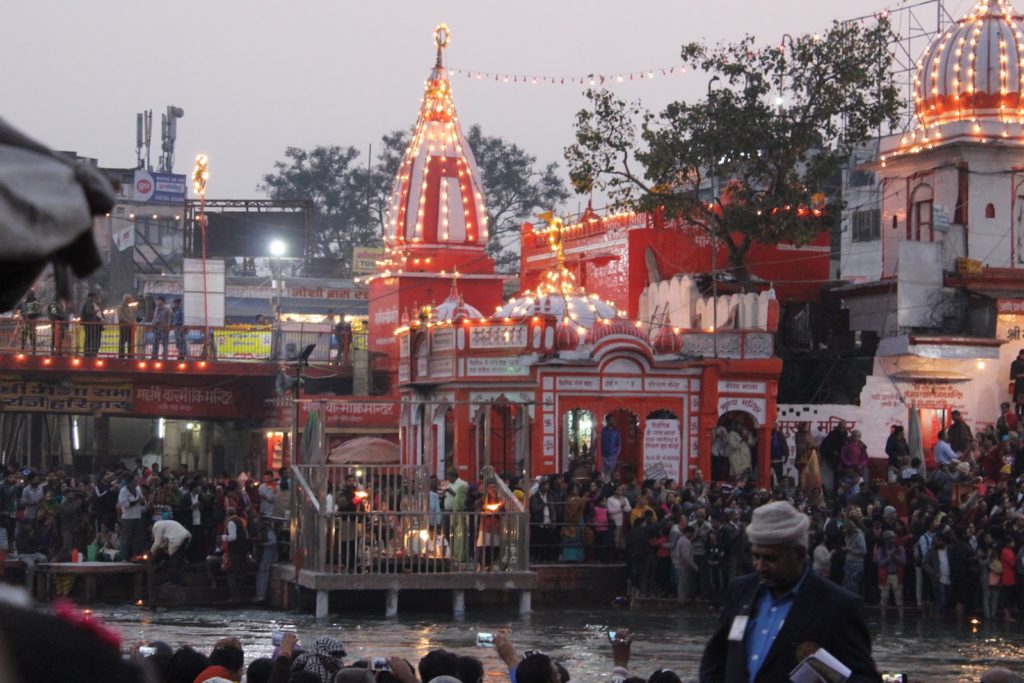 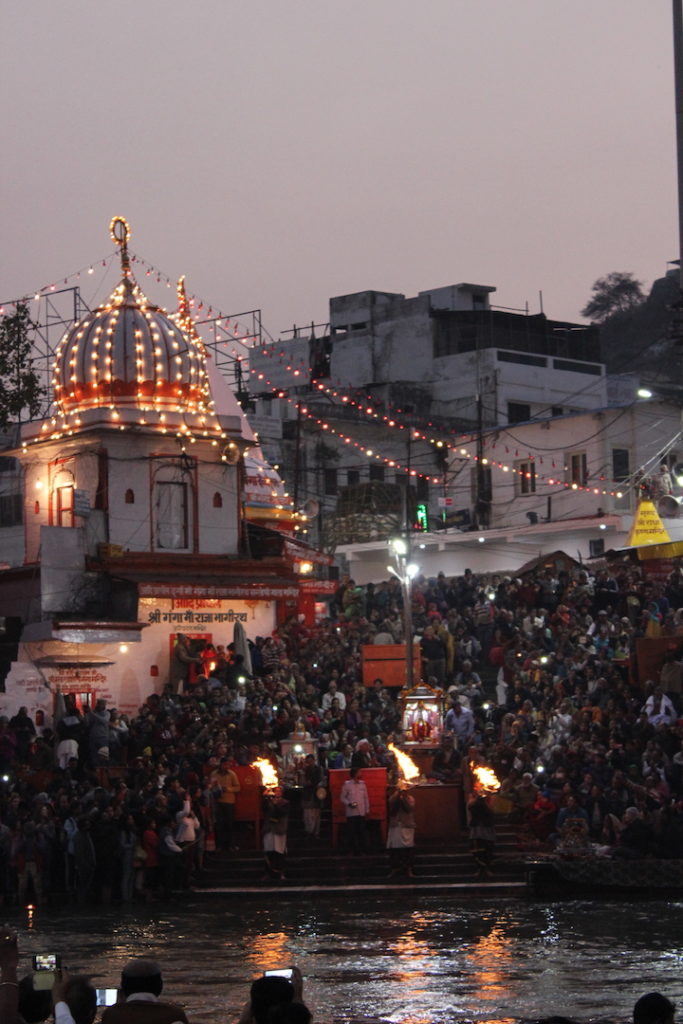 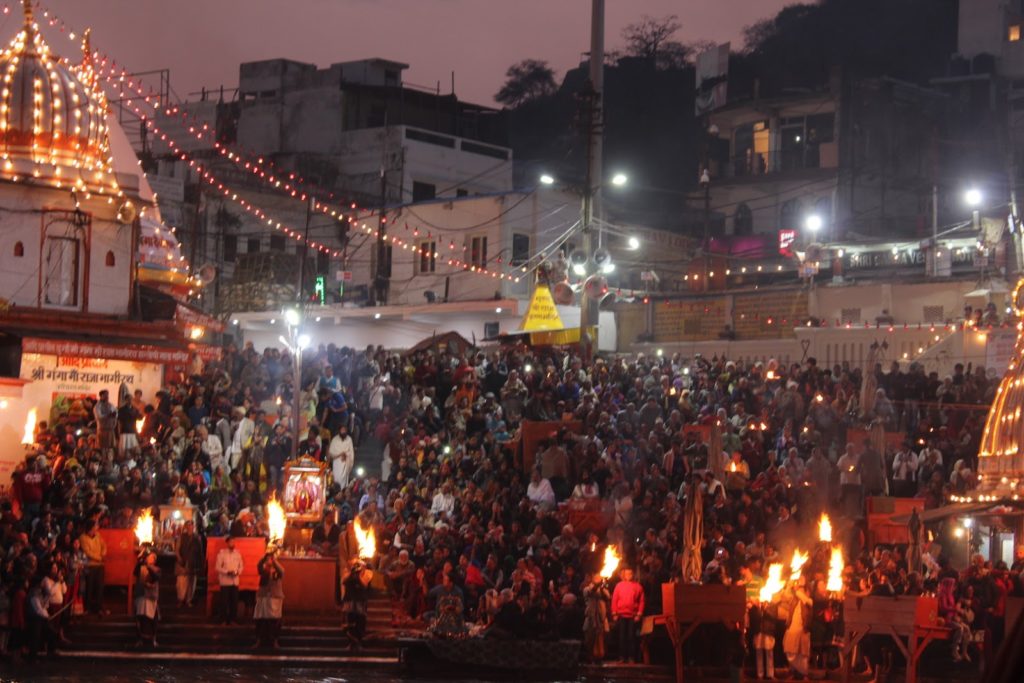 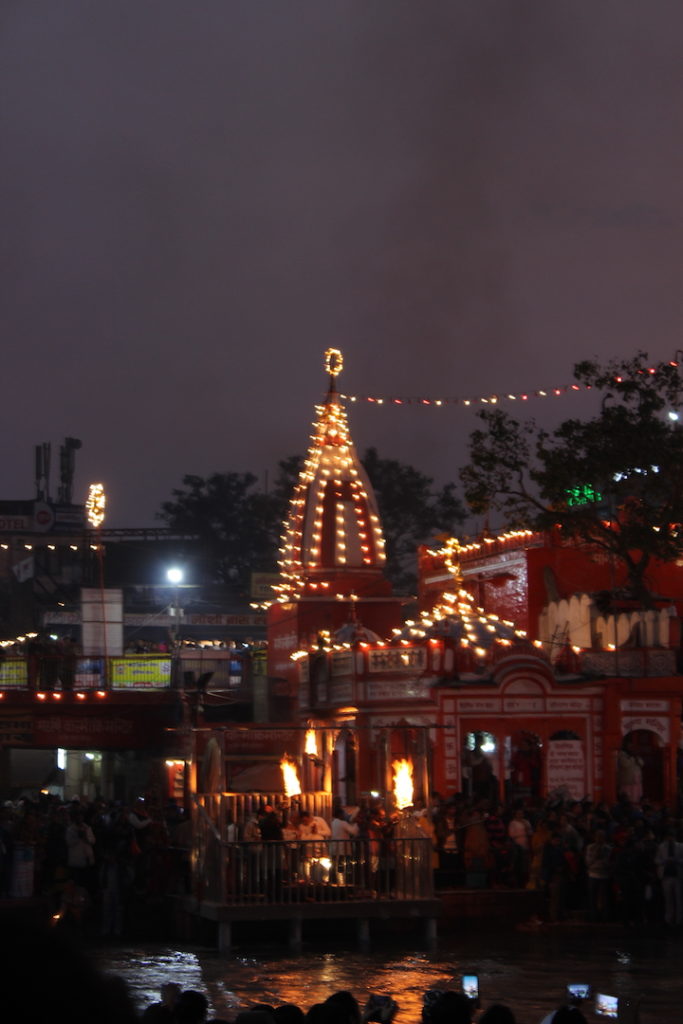 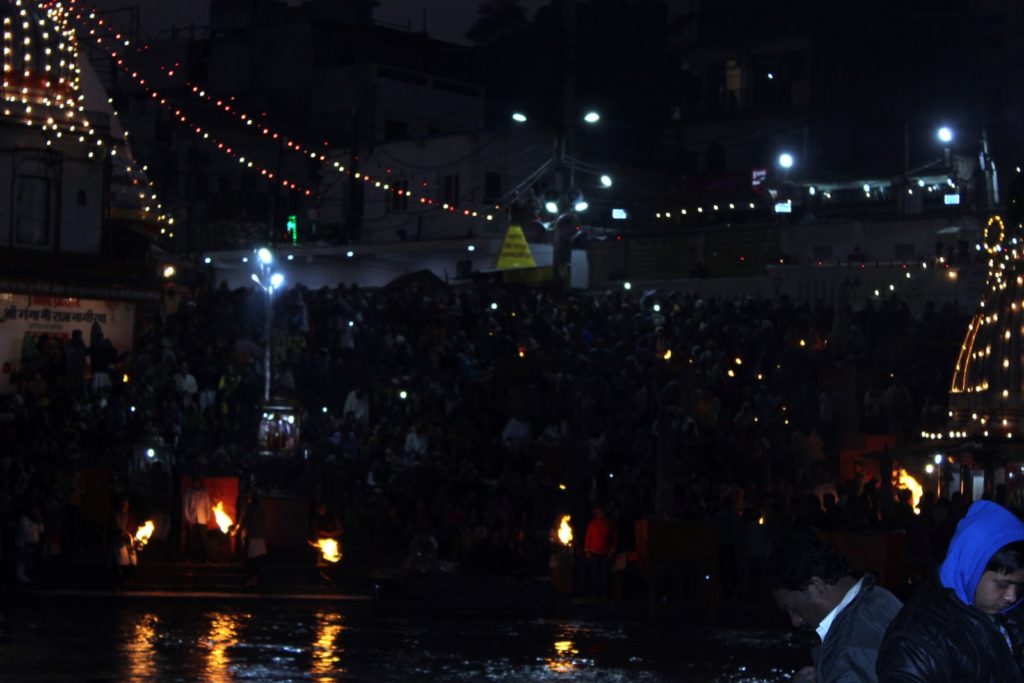 Aarti symbolize 5 thing mainly these are 1) ether (akash) 2) wind (vayu) 3) fire (agni) 4) water (jal) and 5) earth (pruthvi). In Sanskrit the meaning of “Aa” is “towards or to” and the meaning of “rati” is right or virtue”. The atmosphere is quite electric during this time…

Once the Aarti was over, we spent some time wandering the narrow alleys, the shops and street food here before calling it a night. We were exhausted, and had practically no energy to walk back to the hotel, but there was no choice… The night was chill, and we had to walk and walk and walk some more… just after the barricades, we managed to hail an auto and head to the hotel.. The next day was a special day, one where people who had come to Haridwar will take a dip in the Ganga… We had decided to come over around 7ish and hopefully the water will not be freezing cold then was the only thing running through our minds..
What happened next follows next… 🙂