Ellarkum sneham niranja Vishu Aashamsakal!! [Happy Vishu]… is what I read on a friend’s page on April 14th! What a beautiful way to send out New year greetings, right?

When I dug about on this festival, I came to know it is a festival where people decorated their homes with lights and burst of firecrackers (Vishupadakkam) as part of the celebrations. Apart from this, it included buying new clothes- Puthukodi, exchanging gifts [in many cases it is money] -Vishukkaineetam ,and the highlight being the Sadhya[feast].

The feast consisted of dishes made with various flavours in them – salt, sweet, sour and bitter. Some of the speciality dishes were  Veppampoorasam, Mampazhappulissery, Vishu kanji and Vishu katta. What is interesting is that there are a lot of similarities between Vishu and Tamil New year [esp with reference to food].. In tune with this festival, Hyatt Regency came up with a Kerala Food Festival at their restaurant Spice Haat. Here is a glimpse of what lies in store at the festival that is on till the 25th of April.

As we got comfortable, we were served two drinks [ just what you need to beat the chennai summers]

Pineapple Breeze: I took just a sip of this but it was indeed refreshing and had chunks of pineapple that added to the drink.

Sparkling Coco: Well, lets just say it wasn’t a favourite. It felt like a blend of coconut milk with fizz.. To kick start the meal, we were served a medley of three dishes, authentic kerala dishes..

Chakkavaratti: It is a sweet made with Jackfruit and jaggery, cut into pieces and served up. We make this at home, except it is consumed in halwa form. it was low on sweet and resembled the Goan Bebinca..  Loved the flavours in this [maybe cos I love chakkaravaratti per se]

Puli-inji : This is one of those dips/chutneys/pickles that will have you licking our fingers. it is tangy, slightly sweet cos of the tamarind and packs quite a punch. Loved it..
Papaddam: Well just what you need to complete the medley. Little appalams with bubbles all over, just like what a papadam looks like. While the conversations flowed on one side, so did the food. First came the appetisers – pazham port [banana fritters, made with Nendram Pazham], the ulli vadai [onion bajji/vadai]and then came one or two non veg starters as well. During the course of the evening, we chit chatted with Chef Gourab and the other Chef to learn about the history of the festival and how they zeroed in on the dishes. The one that had stood our so far was that the dishes all tasted pretty close to the real deal, and Kerala food is one that I quite love and enjoy.  I also told Chef that my all-time favourite Kerala Dish was Kappa [made with tapioca] 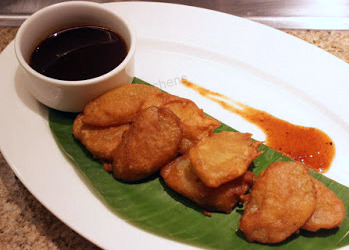 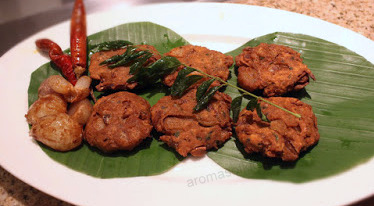 I ordered myself a cold coffee while we waited for the mains to arrive. The one common phrase that everyone quoted the minute the dishes were served up was that I was one lucky bug. Why? Cos almost all the dishes were Vegetarian[ for once.lol] 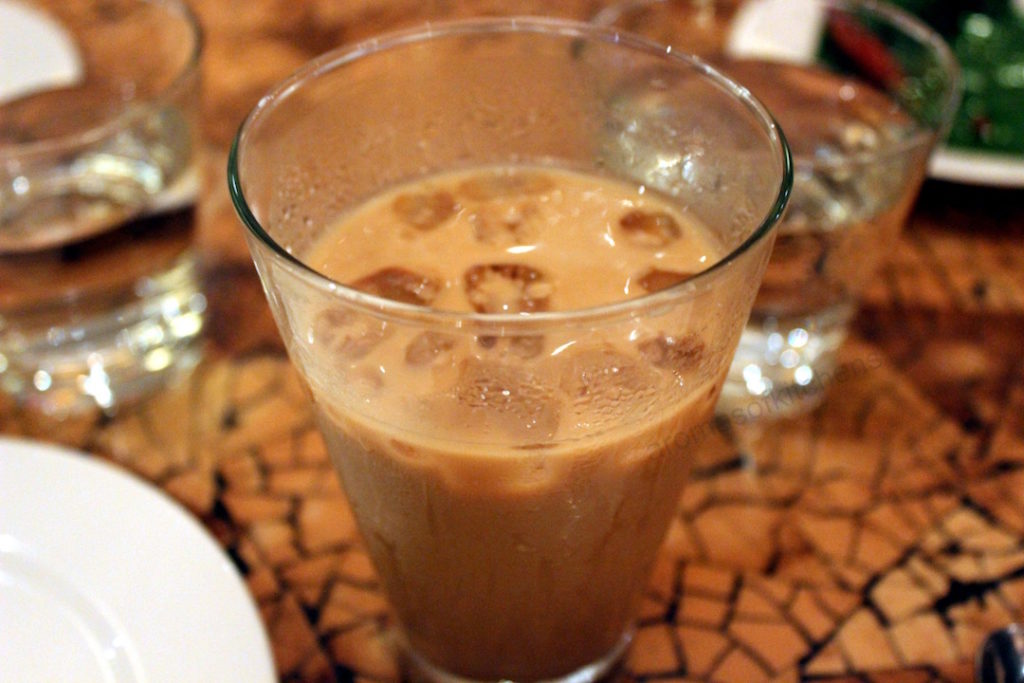 The main dishes can be found as part of the large buffet they have at the restaurant. I tasted a few of them,  Peera [snake gourd cooked like a dry curry with grated coconut], Avial [a mix of vegetables cooked with coconut oil, ground coconut green chillies red chilli and yoghurt], Puliserry [yet another koottu of sorts made with pumpkin with the base made using yoghurt and coconut] and finally there was the Parippu kuttan   [a gravy with mixed vegetables and lentils to give it the smooth texture].We had these with flaky parotta and red rice [which is common in all Kerala Households and is quite a healthy one at that] 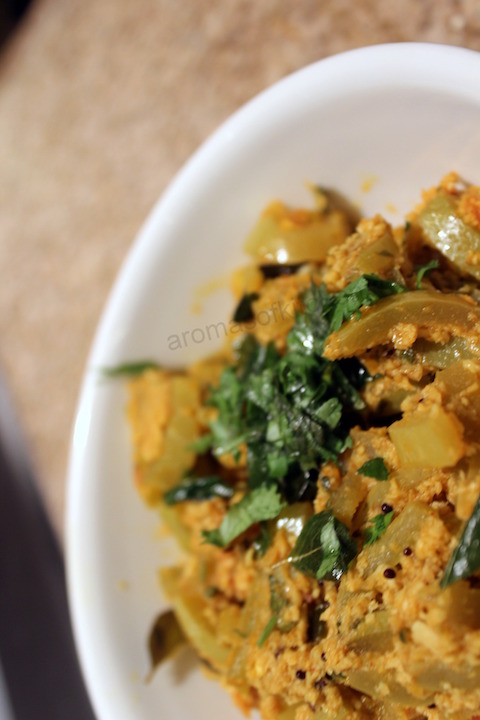 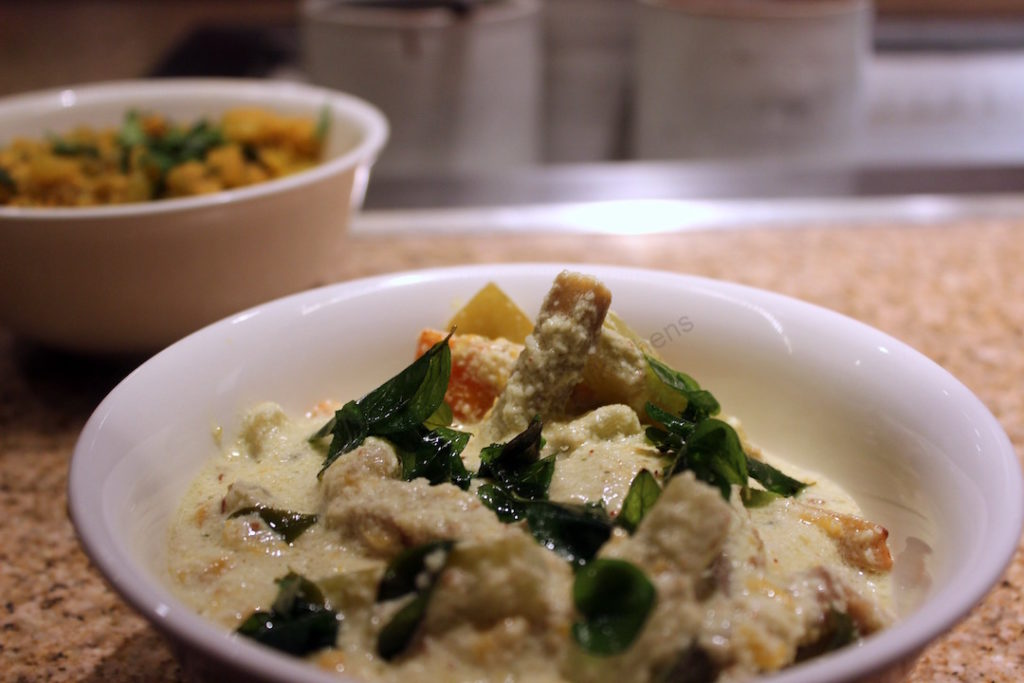 Desserts:
The minute I read about the Kerala Food festival, I began salivating thinking of the  Ada prathaman and well, I wasn’t disappointed  One of the desserts was indeed Ada Prathaman [a payasam of sorts it is made with rice sheets, jaggery and of course coconut milk] . The other dessert is not a big favourite of mine, it is the Chakka Prathaman [similar to the other one but made with Jackfruit pulp] . While we licked the bowls clean, the conversations continued to flow late into the night. A cup of tea/coffee, some water and the night wore on… If you love Kerala food and have been looking for a place that served up authentic dishes, I suggest you head over to  Spice Haat before the 25th to get a taste of the same.