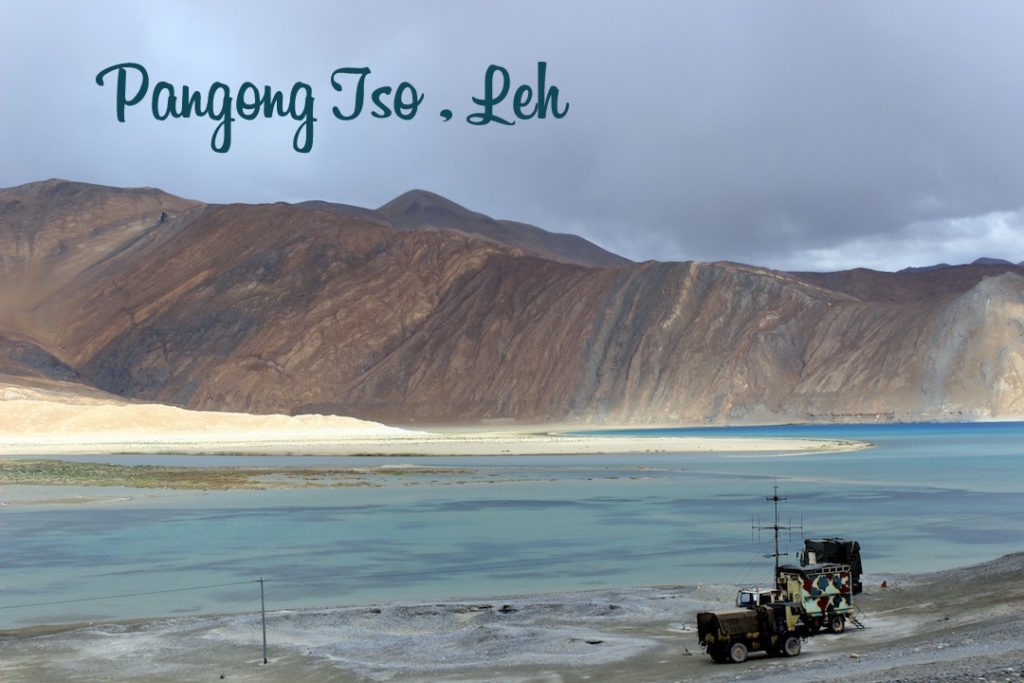 We had been on the road for about 4-4.5 hours.. Had driven through snow fall in Chang la and rains, and now the dark looming clouds seem to come with us to Pangong Tso as well. All along the route, we had the beautiful mountains keeping us company, and apart from that nothing else. When suddenly up ahead we saw a small patch of turquoise/blue amidst the mountains, we got quite excited. That was our first sighting of the gorgeous Pangong Tso [Pangong Lake]…
It is the largest salt water [not as salty as what we see in the ocean but more than in a lake] lake stretching to about 135-km, located in the Himalayas at the height of approximately 4350m.. This lake is spread across India & China with only about 40% in India while remaining is in Tibet [controlled by China]. That afternoon, the lake shimmered in various shades of blue- turquoise, light blue, pale green, dark blue and other hues as well. The mountains and the sky with its brown blue hues added to the image making it look like a painting.  As we drove closer, it looked magical.
The car swerved off the main path into the pebble path all the way to the camp site. It was a bumpy ride, but who cares when the accompanying view /element is so breath taking. Pangong Tso is one of the largest brackish lakes in Asia.
Ah, finally we reached the campsite and well, lets just say if you land here without a plan, you will find accommodation [ there are a gazillion camp sites strewn within a few kms of the lake]. We were staying at Pangong Holiday camp, the tents were quite comfortable and we quickly freshened up and that is when the cold slowly started sinking in. Of all the places we visited, Pangong was by far the coldest.. The hills, snow, the water- well, you get the picture! Ordered some hot tea, drank it while enjoying the warmth of the mugs before adding layers and getting ready to head to the lake.
The lake was a short downhill walk from where we stayed, and the path was completely pebble based. The view that awaits you is something that needs to be experienced. The water was still in shades of blue and brrr cold… There were piles of stones stacked up along the water, others who had set up their tripods and shooting images/timelapse videos and then there were some just walking up and down enjoying the place and silence. Occasionally we would see a trail of trucks coming in from China.
After about two hours here, we decided to head back. The walk is uphill and the winds are brutal, adding to the cold. The evening was spent chilling outside our tents, followed by hot dinner in the dining area and some fun later on.
I dint sleep much and around 4.30 heard some shouting outside the tent. Woke up with a jolt, staying still trying to make sense of what was happening outside. Sounded like some people were being chased by some animal and they kept screaming “bachao bachao [help help] … The sound died in a while and I went back to sleep.. The next morning, during breakfast we came to know that some kids from nearby camp got scared seeing the dogs and ran helter skelter screaming. Wonder what they were doing out at that hour?! Stupid kids!!
So anyways I woke up as always at 5.30 and stepped out to see what the lake looked like at sunrise and must say it was quite different.. Well, that is reserved for another post! 😀
But then will talk about how we stopped at the infamous spot where 3idiots climax scene was shot and how it is being marketed… After breakfast, we were back on the road headed to Leh. Enroute, we stopped at this spot just for some photographs and see what was happening as we spotted groups of people busy with cameras.. Looks like this is where couples come to take photoshoots. I even spotted the couple who flew with us from Delhi. There was a photographer, one other guy controlling a drone and these two all decked up in finery.
We also saw couples riding around in the yellow vespa [ featured in the movie] with video/photo being taken of the same. Damn, the things people do~ Shaking our head, we walked to the edge of land, stood there awhile [till more couples came and took over], clicked some photographs before bidding adieu to Pangong..
For now, feast your eyes on what we saw and enjoyed.. 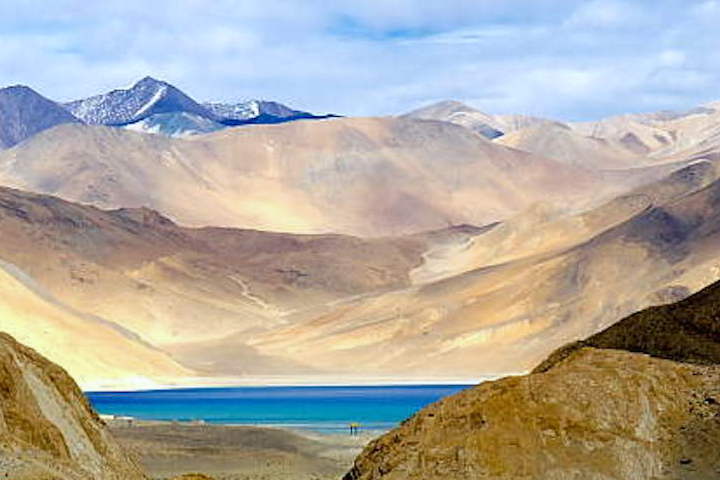 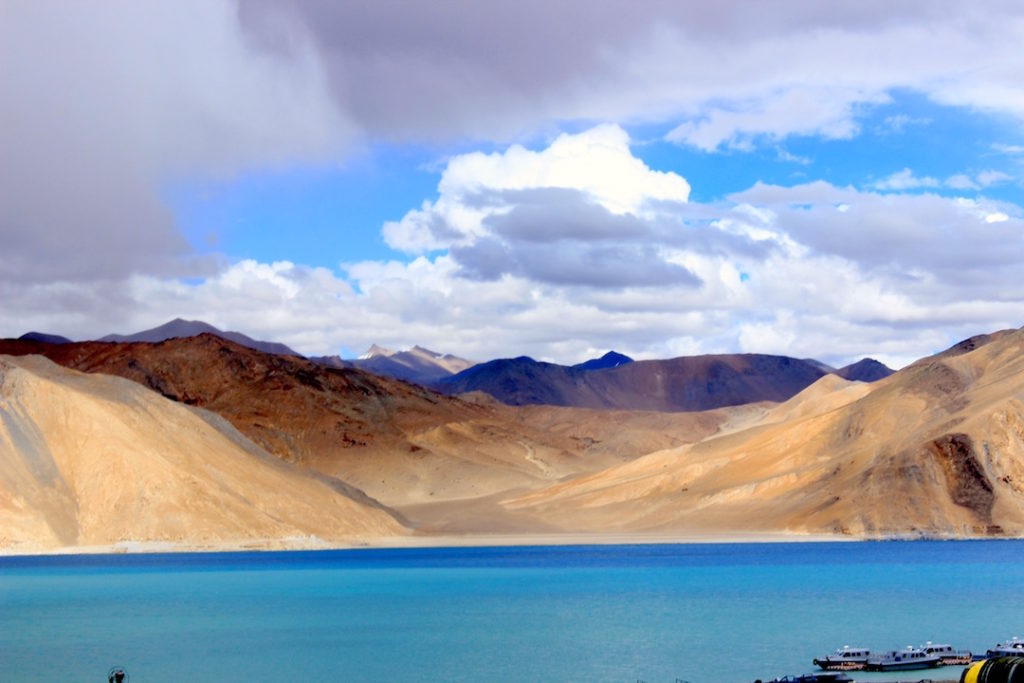 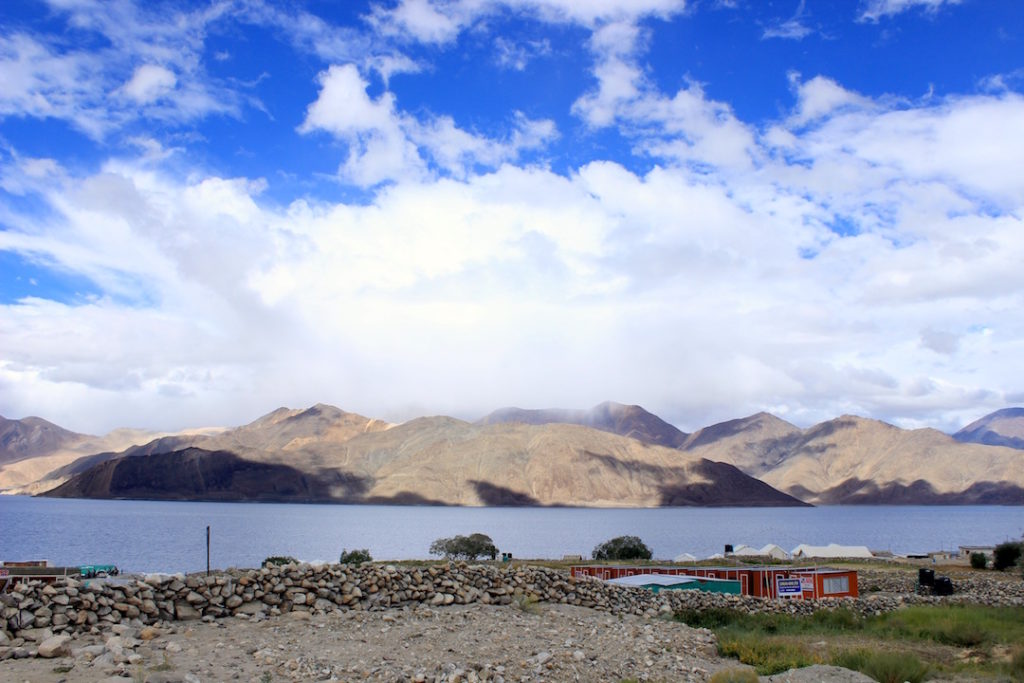 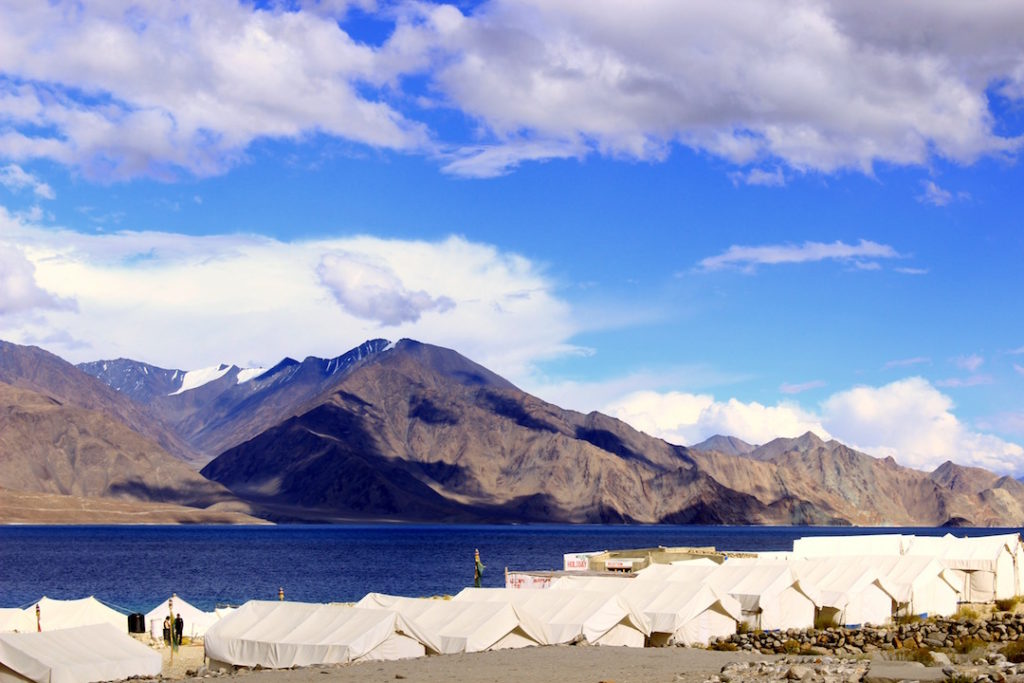 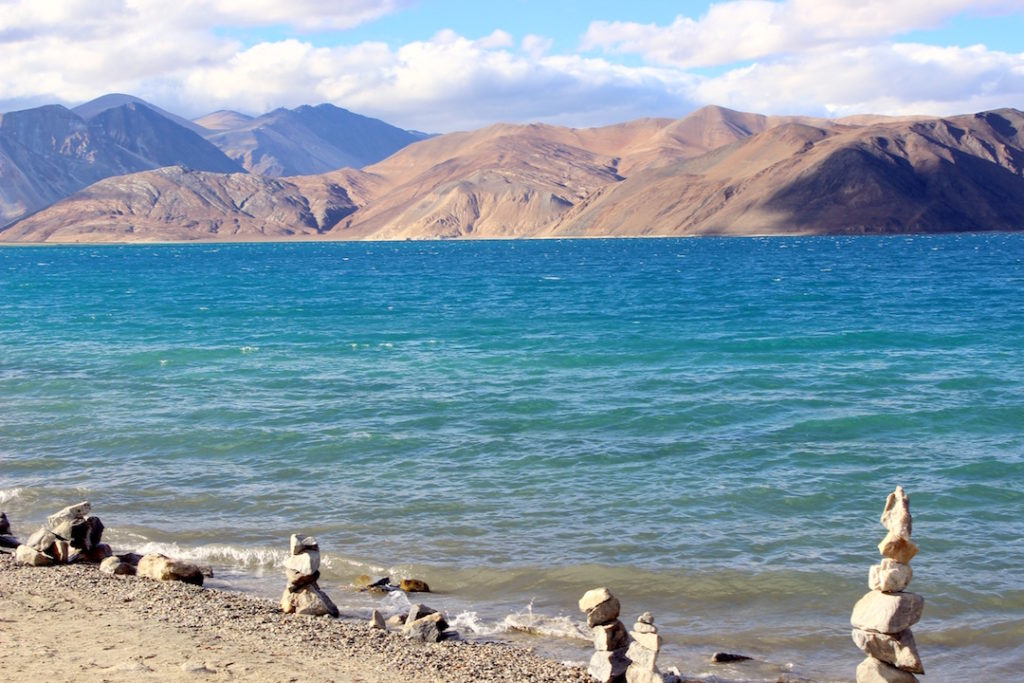 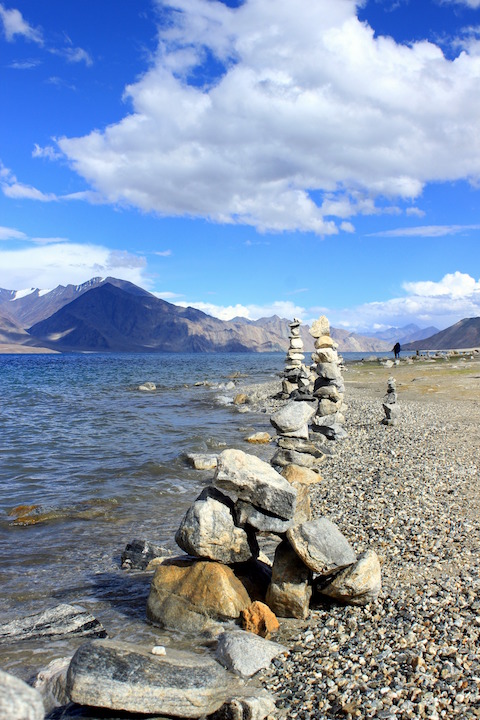 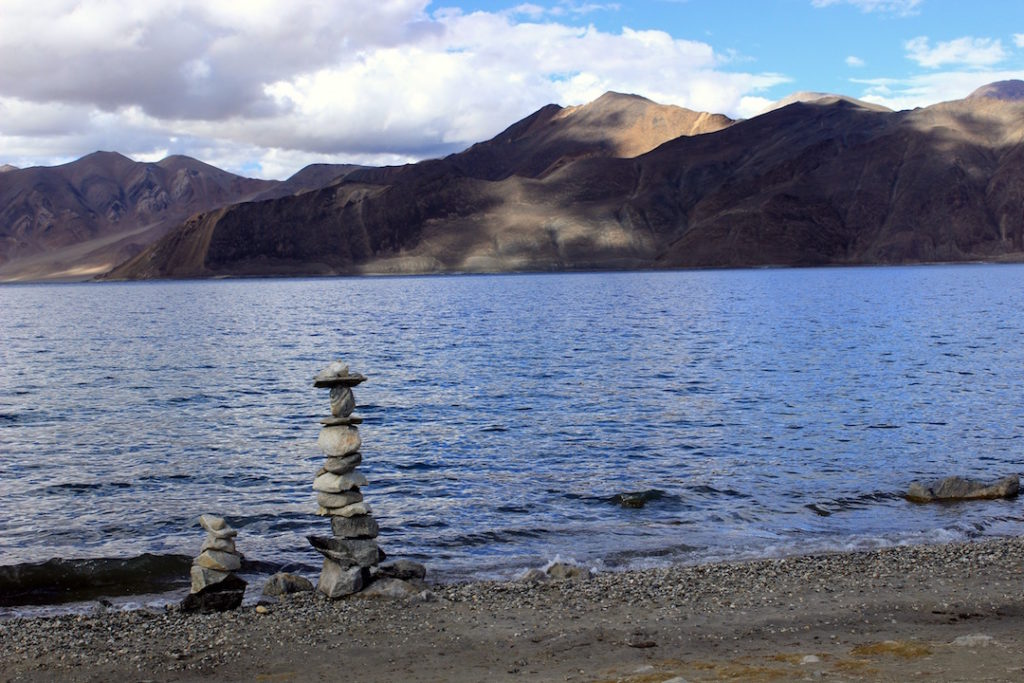 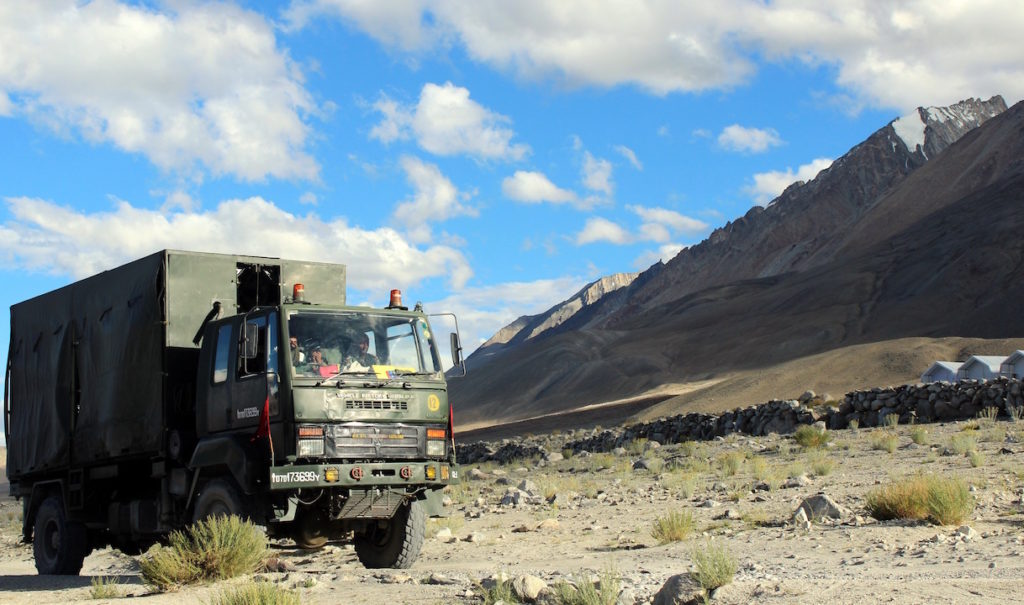 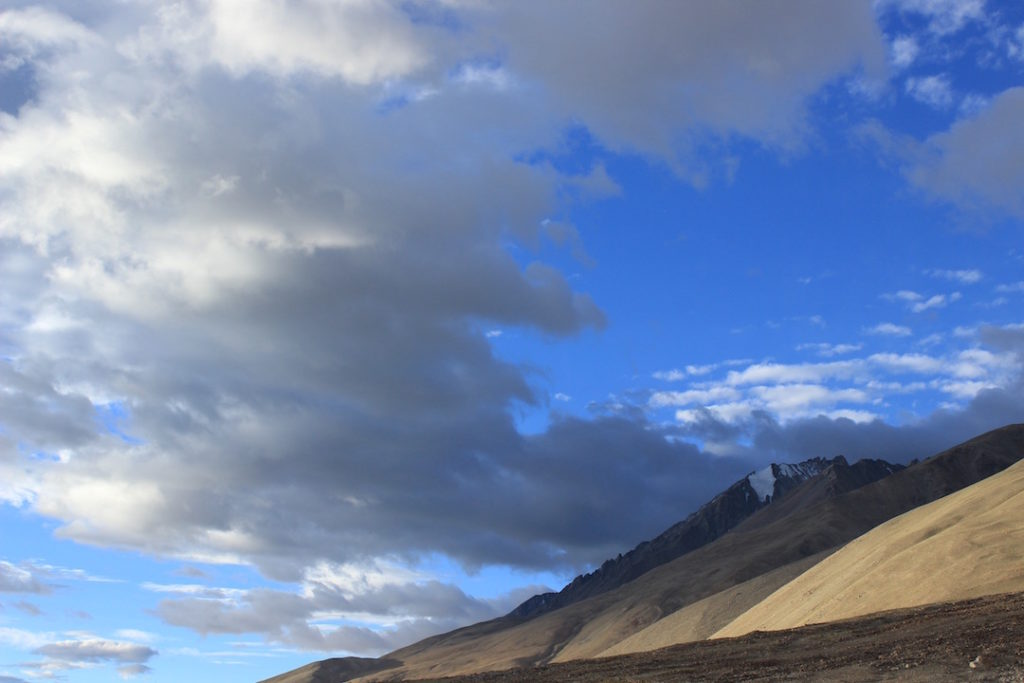 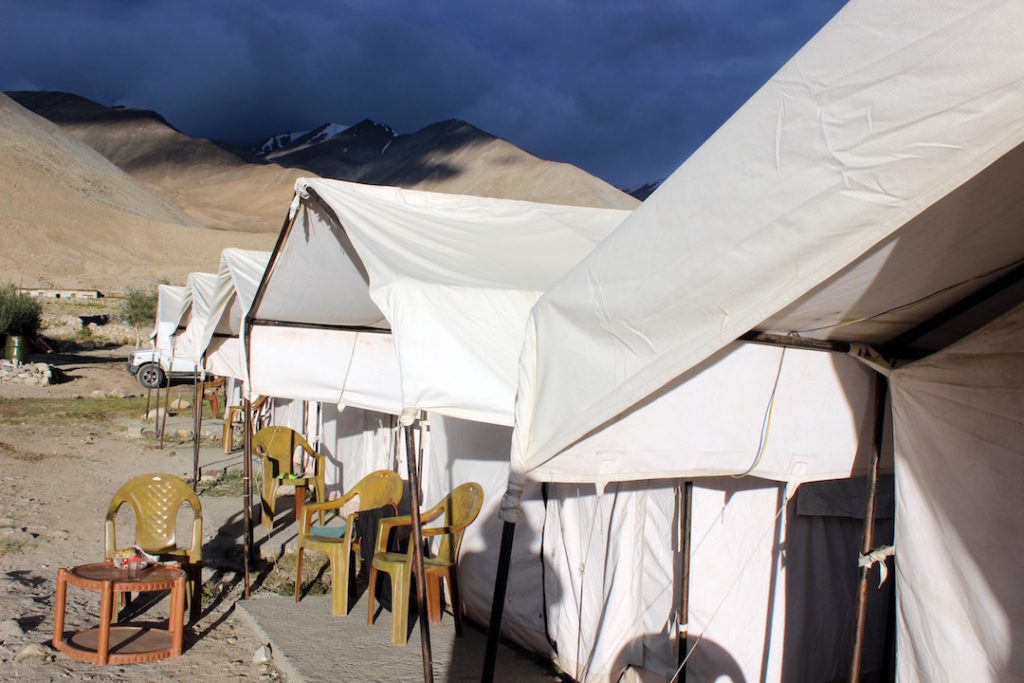 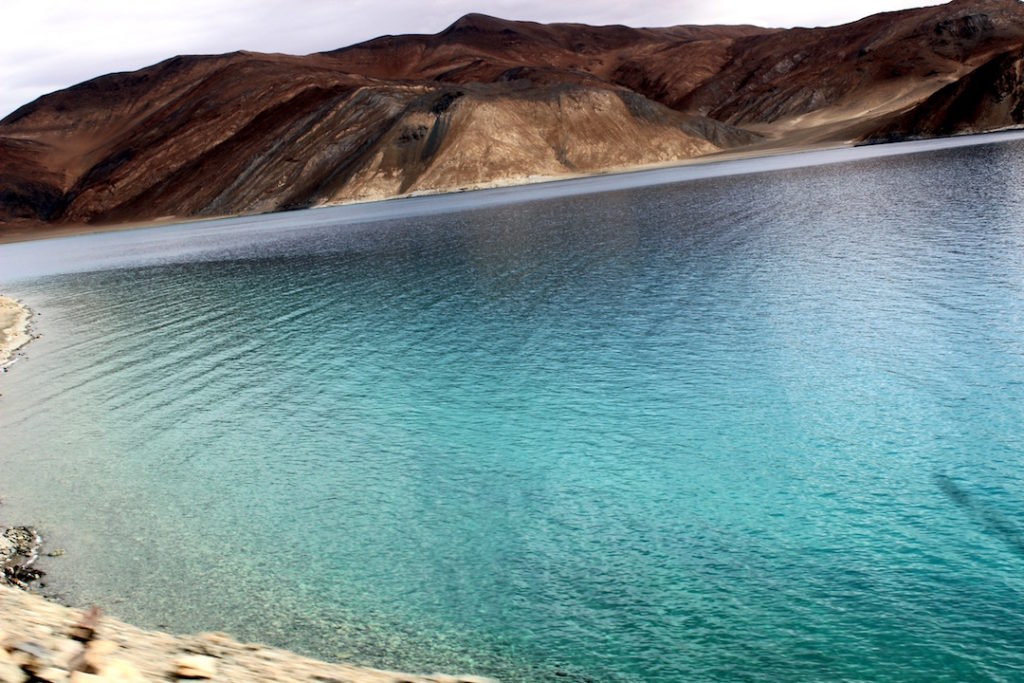 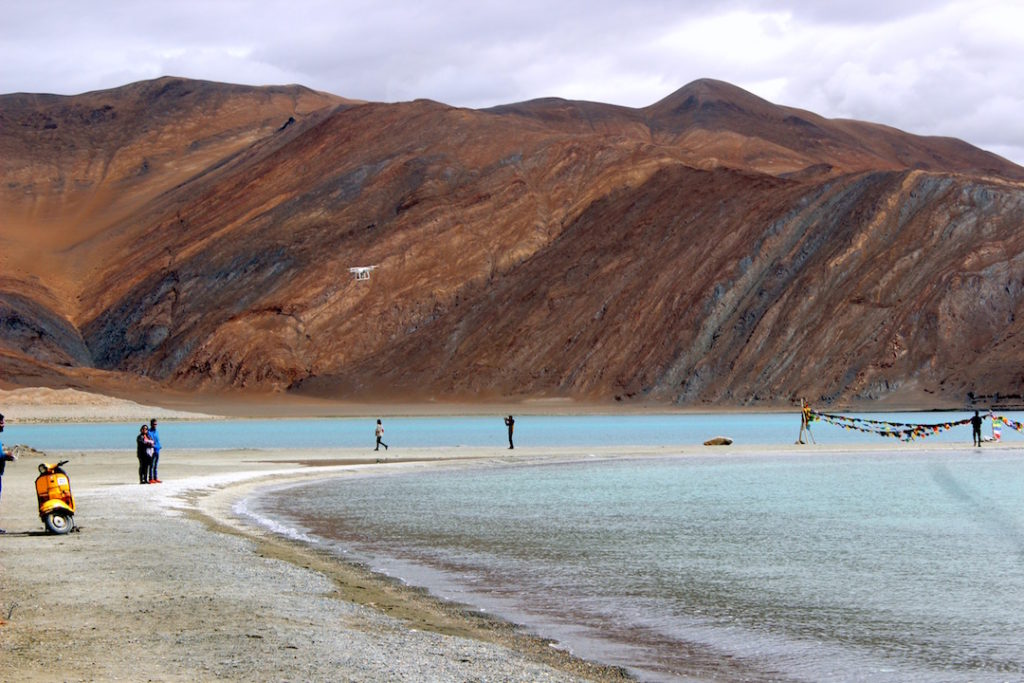 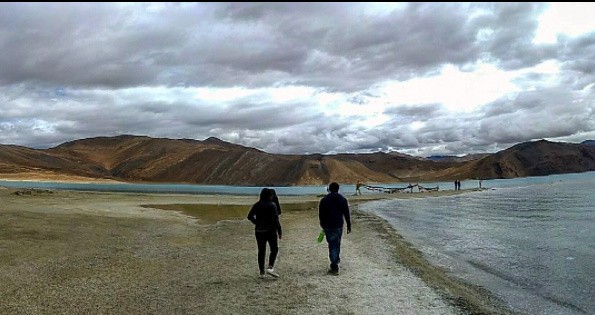