Exploring through the streets of Jhansi… From Orchha, we were headed to a town that was a short 18kms away… We were going onwards to Jhansi, a historical city that is regarded as the gateway to Bundelkhand.. Situated between Betwa and Pahunch Rivers, Jhansi is a small town that was once called Balwant Nagar and was the seat of the Chandela dynasty. Infact, history has it that the region got its name from the fort built by Raja Bir Singh Deo, in 1613 CE. According to legend, the Bundela ruler could see only a shadow (Jhansi) of this fort on a distant hill and thus the fort and the region came to be known as Jhansi.
Jhansi Fort 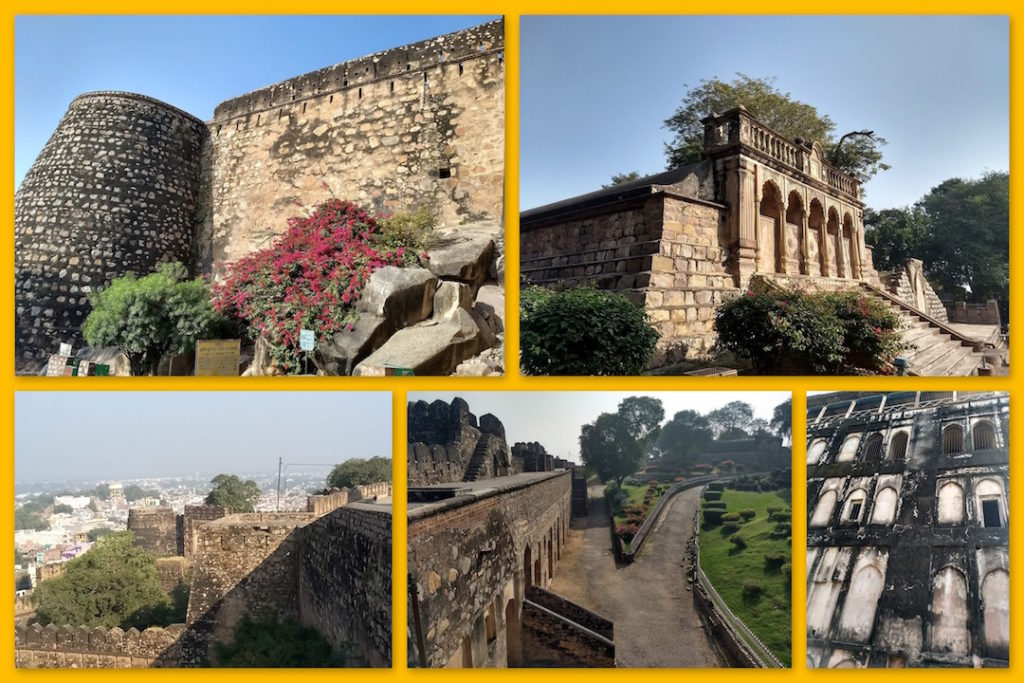 After checking into the hotel, Bundelkand Pride, we decided to start out at the Jhansi Fort. After checking with google maps, we headed out towards the Jhansi Fort, which was less than 2kms from the hotel… Situated atop Bangira hill, Jhansi Fort was built by Raja Bir Singh Deo of Orchha in 1613 CE and served as the base for the Chandela Kings from 11th to 17th century AD. In the 18th century, Jhansi served as the capital of Maratha province and later the Princely State of Jhansi from 1804 to 1853 CE. This fort was also the residence of the great Rani Lakshmi Bai of Jhansi, who fought the British East India Company during the 1857 War of Independence.
Sprawling over an area of 15 acres, the fort is built in the north Indian style of architecture – granite walls and several bastions with mounted cannons. The wall of the fort had ten gates but many of them have disappeared with time, but some still stand tall across the town.. One of the most popular things within the fort is the Karak Bijli, a lion headed canon measuring 5.5mts by 1.8mts. There is also the Panch Mahal, which was the place where Rani Lakshmi Bai lived with her husband Raja Gangadhar Rao till his death. While walking along the fort wall, you can see a board that is the place where The Jhansi Rani jumped on her horse with her adopted son.
As we walked in, a guy who was busy sweeping the place came over and told us he could give us insight into the place but then wasn’t allowed to call himself a guide nor were we allowed to tell anyone outside the place had a guide… It was very amusing cos he would tell us stories, and then move on to sweep another area and then continue once we were done walking around and got to the area where he was..  As we left the fort, we decided to walk further ahead to the Rani mahal, the home where Jhansi Rani stayed awhile…
[My instagram post ]
Rani Mahal The Rani Mahal is located about half a km from the Jhansi Fort. Built in 18th century AD by Raghu Nath-II of the Newalkar family, this is where Rani Lakshmi Bai resided in this palace after the death of Raja Gangadhar Rao.While it looks like a standard house, the interiors are quite beautiful, with the courtyard, the water fountains and beautiful architecture all around. A major portion of the place was damaged by British during the 1857 War of Independence. There is also a Durbar Hall in the second floor fitted with a beautiful wood-paneled ceiling. Apart from that, the walls are all decorated with exquisite motifs of peacock, floral and geometric designs. Today the place is almost a museum that houses various paintings, sculptures and objects collected from Madanpur, Barua Sagar, Dudhai and Chandpur dating from Gupta to Medieval period…
[My instagram post ] St. Jude’s Church is located in the Civil Lines of Jhansi, and having read about the place, I was keen on visiting it. The building is huge and quite different from other Churches I have been to. Along the way, we walked past a few beautiful bungalows, and the church is situated at the end of the street. The devotion to St. Jude Thaddaeus was practically unknown in India, and it was the late Bishop F. X. Fenech who started it in Jhansi, which was a Prefecture Apostolic in those days. It was not easy to do especially during the World War II, but Bishop Fenech was a man of great faith, he made a promise to St. Jude that if he helped him, he would build a Shrine in Jhansi in his honour.
[My instagram post ]
Well, time to head over to the next destination.. stay tuned for more….