Good things come to those who wait… 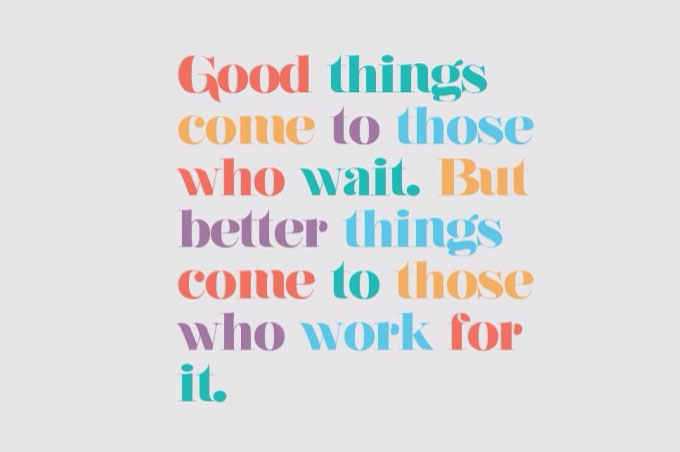 Good things do come to people who wait. Oh yes they do~  But good things also come to those who make things happen, who dont just sit and wait… 🙂

It’s just that we need a lot of patients, and sometimes it can get frustrating. About a decade ago.I was feeling miserable waking up everyday angry.And regretting my decisions.And most of it was.Because of the place I was in other people I was around.I desperately wanted to get out. I desperately wanted to move out and.Something was holding me back.There were days when friends would call for a meet and I would cancel because.Of circumstances.They knew what I was going through and they were just say why don’t you move out?Or just do your thing.

But it’s not that easy. It’s never that easy. At least it wasn’t for me.And while I didn’t expect them to understand what I was going through, I expected them to at least.Understand why I was doing what I was doing.It’s very easy to pass judgment and give advice to others.ButIt’s only when you are in their shoes do you actually see what’s going on.Anyways.

I did move out and live on my own for a couple of years before things changed and I had to move back in with family.While it was my choice and by choice soon I realized I wasn’t really helping myself by doing it.I was back to square one. I was back to feeling suffocated.This time.I was in a better space in terms of my head. I knew that I was definitely going to move out and the guilt.That was holding me back earlier was no longer there.I knew I had deserved a life much better and I knew that it was coming.So I did everything possible from manifestation to making plans.

And lo behold, guess what, I had realized my dreams.

It just so happened.That the universe was listening to all my prayers and wishes.And made them happen. And things pretty much has happened overnight.It’s like what I say, right? Jump into the deep end of the pool.And that’s when you’re ever going to learn how to swim.At least that works for some of us.Who spend a lot of time thinking and planning in our head that.The actual action takes forever, or sometimes just doesn’t happen.

I remember this incident from 2003 or 2004. There was a Bryan Adams concert happening in Bangalore.I knew a guy who worked at a radio station who actually messaged me saying I can get you two passes. All you need to do is get your ass to Bangalore. And this conversation happened around 7:00 PM.I, along with a friend where running a recruitment firm and so I called her saying this is the deal ’cause I was really unable to decide. And she had been unwell for a couple of days and so I was holding Fort at work.She instantly told me “You wanna go, what are you waiting for? Get up in the morning, go to the station, get on the train, go for it and have a blast”. And that was the knowledge I needed. I literally told my grandparents that I was going to get up early the next morning, go to the station, pick up a ticket and go.Everybody was surprised.Heck, I was the most.

So over the years there have been times when I know that I deserve something different or better, and I know that it’s coming.I don’t get frustrated or flustered.And I know for a fact that over the last decade I have changed so much I probably wouldn’t recognize myself.The mean from a decade ago, rather!

Well, what I’m trying to say is if there is something you want or you’re dreaming of. Make sure to put it out there. Make sure to visualize living that life.And before you know it, it is going to become a reality.

While the universe does its work. Make yourself stronger. Build your life. Get things in place. Start building in your head how things are going to pan out and be ready.’cause it might just happen overnight. You never know…