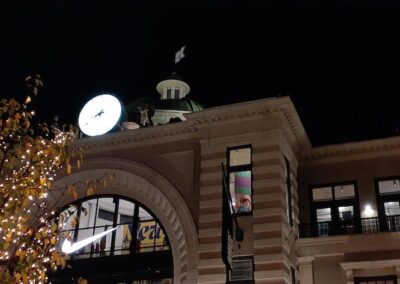 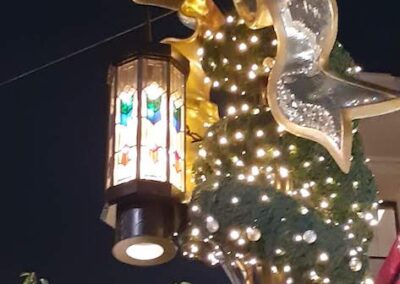 Established way back in 1934 as the Farmers Market, the space has grown to become one of the most popular high end shopping and dining spaces in LA with the addition of The Grove. There are stores from leading brands, cafes and stores to keep visitors engaged for a few hours. I hadn’t heard of this place, and so when my aunt suggested we check it out to see the lights and the experience the vibrance of the place, we decided to go check it out.

In fact, we had come back from our Solvang & Santa Barbara trip that afternoon and had the rental car for another day.  We finished dinner and stepped out around 7 pm, and while looking for the parking lot, we crossed a tower with “The Farmers market” on it and a large square near it.

When digging around, I discovered the entire space was owned by Gilmore Family, and was used as a stadium for car races and other entertainment purposes. Then,   people who rented it out used to sell their produce from the back of their trucks. Subsequently, permanent stalls were set up and it evolved into the Farmers market as it is known even today.

We found the parking, and got out to explore the space. It looked quite high end and fancy, and my partner remembered visiting here during his earlier trip [dining at a restaurant with his family]. As we walked along the cobbled streets, taking it all in, there were art installations, lights, and throngs of people out [considering it was the holiday season]. The centre piece was the 100 foot tall Christmas Tree adorned with ornaments & 25,000 lights [its a tradition they follow year after year].

The two stores that caught my eye were – the multi-level Barnes and Noble store, and the huge Apple store. We did enter the Apple store and spend some time walking around. Even though there were just about 10 products on display, the space was huge and had multiple tables with the same items on them. The ceiling was a giant mirror and it made the space look bigger than ever. As we walked along the corridor outside, we spotted a few vintage cars parked, toy train for kids and several small food booths [selling everything from sandwiches to coffee and ice creams] . Did notice there was a movie theatre as well, we would have gone if we weren’t so zonked out~

It is a fabulous place to go to if you love checking out high end brands, or one of those who loves malls. We were there for maybe an hour before hitting the road back home.