Art in a square

If someone were to point to me and say ‘she is quite creative, good in art & craft”, i might have rolled on the floor laughing.. Mom can draw very well, good with her hands, and then hop skip jump me and go to my sis who again can draw well… !!
Recently, met a stranger who has become a friend, who showed me that i had in me to do something creative as well ..
Here’s a bit of background before you start pulling your hair out!!
I attended what is called F4- face to face facebook friends meet, on a Wednesday evening at Subway, Nungambakkam… Friends of mine had mentioned it was a meet for people from facebook… Friend of friend of friend of friend… which is how the ball had rolled, and they had reached the magic number of 100 that wednesday i landed !! As i walked in, a flurry of Hi hello greeted me, some smiles, some curious glances and some silent reactionless faces… Made my way around, and soon found some familiar faces…. Also managed to meet this interesting guy Subash, who was creating what looked like a bird from paper..
Got me interested, i had read and seen pictures of Origami , but never thought i would get interested in something that looked mighty complicated.. Pretty soon, i was sitting in the table with 2other friends and we were hard at work, trying to make a camera, following his moves intently…
What a sense of accomplishment… hahaha….
Fast forward to the days that followed….
I was hooked to this art form, had a bit of doubt if i can create something … What did i know!! Thanks to youtube, and Subhash’s inputs, i have managed to get a crack at it and make something interesting whenever i find time…. 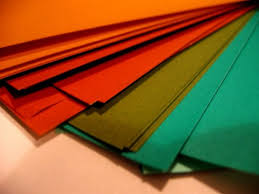 At the next F4 meet, I picked up some Origami paper to the meet, and from thereon the journey has been fun!! Not addicted, but whenever i find some spare time, i try my hand at something new… 🙂 Most of it is on paper from my printer, at times i do sneak in an origami sheet[but they are so thick..damn…] 😀
The 1st thing i made was………a Butterfly… actually, tried 2 different kinds of butterfly… 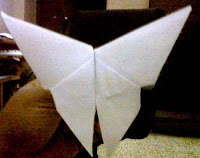 Here’s a collection of other stuff that i managed to create ,,,,
This is a cool site if you want to get some instructions and get started from… But, must tell you, the videos make it so much simple and easy!!